Authors, on the day you win the most prestigious award for children’s literature in the land, you’ll have no warning that it’s coming. The Newbery committee issues no list of nominees, although there might be whisperings as people speculate on who the contenders might be. Kelly Barnhill heard a few such speculations about her latest book, “The Girl Who Drank the Moon” (Algonquin), but she dismissed them. “I thought they were nuts!”

And then on Monday, the phone rang at 5 a.m. “They woke me from a dead sleep and I was only partially comprehending what they were saying. The whole committee was there — I could hear them all on the speaker phone, and they were so excited! What I did comprehend was that this was a group of people who cared very deeply about children’s books and they had analyzed and discussed so many, and in the end, landed on mine. I was incredibly moved by that.”

“The Girl Who Drank the Moon” is a richly imaginative tale of a baby who is abandoned in the woods as a community sacrifice to a bloodthirsty witch who supposedly lives there. By deliberately offering the witch one baby every year, the community appeases her and offsets any random damage she might inflict. This sacrifice also, coincidentally, keeps the population in fear of their authoritarian leadership. From this dark beginning unfolds a surprising story filled with light, playfulness and the bittersweet magic of the process by which children grow up.

Barnhill lives in Minneapolis, and is the author of five books for middle-grade readers. She teaches at the Loft and with COMPAS (Community Programs in the Arts).

MinnPost: You said you had no idea this book would be a winner. Didn’t you, though, in your deepest heart, have an inkling that it was special?

Kelly Barnhill: I did, but I didn’t think anyone else would feel the same way. I thought it was too weird! It breaks too many rules about children’s books. It includes the point of view from characters that are adults. It has a lot of complex plot threads. My book “The Witch’s Boy” did well for my publisher, and when I turned this one in, I thought, ‘I hope they still like me after this.’

MP: You clearly are very attached to these characters you created, which makes it easy for readers to feel the same way.

KB: I am — I’m too close to them. Publishing a book is a constant grieving process for me. I get so close to my characters, I perform them in my living room, I go around with them in my brain for years, and then they are gone. It feels like a loss. When I talk to kids who are reading the book, I tell them to say hello to [characters] Luna, or Antain or Glerk, because I miss them. With this book, it’s been especially hard, because it deals so closely with the topic of family bonds. Caregiving has been my job for the last 17 years, and my oldest daughter will go off to college soon, and this book feels like part of the path to leaving family and childhood.

MP: What was the process of writing it like?

KB: It began with the image of a swamp monster that came to me one day when I was out on a run. I wrote a poem about it and put it in an envelope. I would sketch out scenes and characters and put them in the envelope. I thought about it for two or three years, working out how it should be told, and then the first draft came together in about six months. 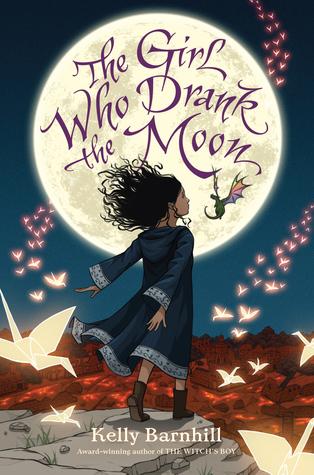 MP: This book has such a strong folkloric quality. Is that a form from the past that we keep returning to, or are you writing a new kind of fairy tale here?

KB: I am super interested in fairy tales and folk tales. As a kid, I really loved the Frank L. Baum “Oz” books, and Grimm, Andrew Lang, Charles Perrault and folktales from around the world. We as human beings are built out of stories and we need stories. Being in that place of the unknown is really important to us as we go out into the deep, dark woods of the world.

MP: There’s also a theme about fear of governments here. As in “The Hunger Games,” this book features a society sacrificing its children. Why is this idea taking hold in children’s literature?

KB: I’m writing not so much about fear of government as fear of authoritarianism. Authoritarian governments exist because they manipulate the narrative. We can have a set of facts on the ground but if those facts are manipulated, the population can be manipulated into compliance. The reason the Sisters and the Protectorate were able to retain power was that they sold ideas that were untrue. We are experiencing this now. I didn’t mean to write a book that dealt with the issue of fake news. But I think we need to understand how stories can bind us together or tear us apart. We are built to be narrative thinkers and we need to be conscious of what the narrative is versus the facts.

MP: You are a teacher with the COMPAS arts program and the recipient of numerous arts grants. What value — aside from its value to your own work — does arts funding hold for society?

KB: The value of art to any society is incalculable. Right? In any age, that has been true. Look at the Renaissance. It would not have occurred if there had not been sponsorship of artists. Art needs money to survive and we need art to survive. Art has ennobled us as human beings, it has enlarged us and made us grew stronger. I know that it matters to kids, teachers and artists. Every time I do work in the schools, I become more of myself and I watch children grow more into themselves. When I see discussions of defunding the arts, I get very nervous. We need art more than ever, and we need art by diverse groups of people. Right now, I am not thinking about how the Newbery Award is good for me. I’m thinking about how I can use it to uplift and expand the arts for others. It’s light and energy that I can divert onto other writers and artists to make a difference.

No warning: Kelly Barnhill on winning the Newbery Award