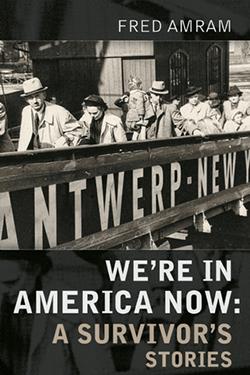 When Fred Amram visited Germany as a tourist in 1960, he pointed to a spot in the air to show his wife where the apartment he once lived in had been. The building was gone. Amram could have died in one of the bombing raids that obliterated his old home, or been killed in a concentration camp, as his relatives were. Instead, he and his parents fled to the United States.

His new book, “We’re in America Now: A Survivor’s Stories” (Holy Cow! Press), describes his family’s narrow escape and arrival in the U.S., where the refugee family settled in a cockroach-infested apartment in New York. While his parents worked their way out of poverty, Amram attended a school where he was the only Jew and the only student who didn’t speak English. He soon became the school’s top student. After the drama of resettlement, Amram’s memoir becomes the story of a typical midcentury American boyhood, defined by adventure (and misadventure), discovery, family relationships and the pursuit of dreams. Amram’s education ultimately brought him to Minnesota, where he worked as a writer, inventor, consultant and professor of speech communications at the University of Minnesota.

MinnPost: Why did you wait so long to write a memoir?

Fred Amram: People who are survivors do more than be survivors. It is not a career. I wrote, taught, raised a family and had a full life, so I didn’t have time to write about my life. I was too busy living it. I also didn’t want to be known only as a survivor. Now, though, it feels more urgent to tell that story.

MP: The Holocaust has been well documented. How does your story expand our understanding?

FA: I write about the early days. Most books talk about the horrific events that occurred after 1942 or so. But the period before that set the foundation for what happened later. Also, every Jewish individual who lived through those days had a different story. I have a Greek friend who survived by hiding out in the forests of Greece. Another friend landed in a convent, and learned to say the rosary as well as she knew her Jewish prayers. Furthermore, the books that are coming out now are by the child survivors. We had a unique perspective. We understood that we had lived, while others had not. I dedicated the book to my cousin Aaltje Wurms, who was killed in Auschwitz when she was only 3 years old.

MP: What is the message you want readers to take from your book?

FA: Auschwitz happened because for 10 years or more, other things had been allowed to happen. When we learn about the Holocaust, we learn about the barbed wire, the gas chambers, the skeletons. But we don’t learn about how in Germany, first one could only sit on a park bench labeled, ‘Only for Jews.’ [Nur Für Juden] Then later, Jews couldn’t sit at all. Or how first, Jews were barred from restaurants and hospitals, and then later, they were issued special ID cards and labeled with the Star of David. And then they lost citizenship. I was born in 1933, in a Catholic hospital, because Hitler has closed the Jewish hospitals and barred Jews from going to the public hospitals. Auschwitz was built nine years later, in 1941. Because people stood by and didn’t protest the loss of smaller freedoms, it was allowed to grow, and pretty soon they were building concentration camps. We pay attention to the concentration camps, but we forget that it started with hatred, and with a big lie and the creation of alternative facts.

MP: I gather you are now talking about current events.

FA: Well, when Trump says he wants to make America great again, he suggests that it is not great now. That ignores our strong economy, our strong presence in the world, our strong opportunities for education and the fact that this is still a free nation. His false words create doubt and open opportunities to damage and discount the things that do make this country great. We are only two weeks in and I want to be fair. We haven’t seen it all yet. But what we have seen in the past week is something I have seen before. It strongly resembles the direction Germany took when I was a child. 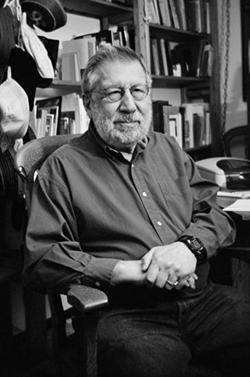 MP: Were you concerned by the administration’s statement on Holocaust Remembrance Day?

FA: I thought it was insensitive, but in the big picture, it’s not something I am going to focus on. Given Trump’s family [Ivanka Trump’s husband is Jewish], anti-Semitism isn’t a defining goal. There is Jewish input in his inner circle. So I am not concerned so much for myself, but for people of color, people of different religions, people who are otherwise disenfranchised, and refugees. You have to speak out against injustice even if it doesn’t impact you.

MP: Your book is also about being an immigrant. What do you want people to learn about immigrants by reading your story?

FA: American culture is different than Hmong culture. It is different than Somali culture. These differences come together to make the country greater, because people who come here as immigrants — or more importantly, as refugees, as I was — are so grateful to have escaped that they feel obligated to honor their parents and their new country by doing their very best to live up to people’s expectations and to help others as they were helped.

MP: How did growing up hearing your stories impact your children?

FA: My publisher asked the same question. I said I thought the book should be all about me! But I eventually added the epilogue to respond. I know that my children were always concerned about other people. My son saw movies about slavery and the Holocaust at school and needed to be officially excused because he could not deal with these terrible things. My children and my children’s children feel responsible to not be a bystander. Germany happened because people allowed it to happen. So we must be upstanders, not bystanders, or we will all lose what freedoms we have. We must be vigilant during these times. We need to protest. If we had had protests in Germany in the 1930s, the Holocaust would not have happened. I worry that we will become a police state in which, like the Gestapo, police have the right to stop and kill protesters. We must be allowed to protest. But now I am becoming preachy. I just want to be a storyteller. I want to be known as a good storyteller, as a good guy, as a fine professor, as someone who’s led an interesting life, and oh, yeah — as a survivor.

U of M professor’s memoir recalls the early days of the Holocaust, and raises a warning