The following is an excerpt from the forthcoming book “Closing Time: Saloons, Taverns, Dives, and Watering Holes of the Twin Cities,” by Bill Lindeke and Andy Sturdevant. The book, published by the Minnesota Historical Society Press, is “a multigenerational pub crawl through speakeasies, tied houses, rathskellers, cocktail lounges, gin mills, fern bars, social clubs, singles bars, gastropubs, and dives.” A launch event for “Closing Time” will take place at 7 p.m. on Thursday, Nov. 7, at the Black Forest Inn — to which another chapter is devoted.

For better or for worse, Moby Dick’s on Hennepin Avenue was a bar whose reputation preceded it. Moby’s was a constant subject of tall tales and watercooler reports, a bar that folks visited just to say they’d been there. At Moby Dick’s, you didn’t need a band or floor show; the bar itself was the entertainment. Inside the big doors, behind the blue whale, was the center of Hennepin Avenue, a bar that thrust you into downtown’s vital, jostling dance.

Or as Tom Waits put it:

All the donuts have

And the moon’s teeth marks are

On the sky like a tarp thrown over all this

Dead birds and the steam

The whole goddamned town is ready to blow

And the bricks are all scarred with jailhouse tattoos

The Hennepin Strip was the center of an entire world within downtown Minneapolis, a kaleidoscopic jumble of businesses, people, and flotsam that defined the city’s grittiest hang. Hennepin housed some of the best Minneapolis street life, boasting art galleries, theaters, the last remaining flop hotels, all-night diners, bowling alleys, arcades, music clubs, low-end restaurants, and newsstands offering magazines, newspapers, and porn from around the world. On Block E, everything and everyone was pressed together, jostling and bumping elbows to get closer to the action. And, of course, there were plenty of bars on this stretch of Hennepin — Mousey’s, Brady’s, and more — but, befitting its name, Moby Dick’s was the biggest and most fearsome of them all.

Whether Moby Dick’s deserved its reputation was a topic of heated debate for decades. To many, Moby’s was the poster child for vice in downtown Minneapolis, a symbol of the area’s crime, disorder, and immorality. In the eyes of certain people in the Minneapolis Police Department, Moby’s was the most wretched hive of scum and villainy the city had ever known; one MPD sergeant once claimed, “It is our estimation that if you go into Moby Dick’s bar you have a one in four chance of being assaulted.” Headlines routinely pilloried Moby’s, and the bar served as a convenient scapegoat for larger anxieties about crime and the future of downtown.To other observers, Moby Dick’s was a force of stability, even a civic pillar, of sorts. When asked about Moby’s dubious reputation, one Hennepin beat cop in the mid-seventies said: “Moby Dick’s, the worst bar in town? That’s a bunch of baloney! I can’t name a bar that doesn’t have drugs and fights; there must be something wrong at Moby’s though, because you can get in on the weekend nights now. It used to be packed to the rafters.”

Moby Dick’s was an easy stand-in for the conflicting views on downtown Minneapolis. One’s reaction to mere mention of the bar’s name was a quick tell about whether that person thought downtown should be a placid bourgeois office haven or a diverse, edgy mix of pell-mell nightlife.

From the outside, the bar was large and iconic. Its slogan, “a whale of a drink,” was mounted on a sign over the front façade, one among dozens of signs that hung above the wide Hennepin Avenue sidewalks. Moby’s was distinct: the blue whale, spouting, gleeful, a twinkle in its eye.


During the daytime, Moby Dick’s was relatively tranquil, but never boring.

As one observer described it, “Daytime sounds are some friendly haranguing among the players and muttered commentary from the old men watching along the wall. . . . It’s got a good racial balance and some of the best drinks in town.” You might even find, as one regular admitted, the occasional kid stopping in on his or her way home from school for a free pop from the bartender.

At night, it had a different vibe. The “whale of a drink” slogan referred to the potent pours you’d get at the bar. At Moby’s, shots of liquor went for a dollar, for which you got almost two ounces of rail booze, well below the prices at other bars. As a result, Moby’s was the best place to get drunk on a budget, which was why it attracted almost every type of boozehound in the city: black and white, rich and poor, office stiffs and bums, men and women, hustlers and rubes, tourists and locals, conventioneers and pool sharks, drunks and more drunks, and “swarms of pool players and pinheads.”

“It was a place you’d meet your friends before you went to a concert or out to eat. Or you’d just wait at Moby’s because it was great for people watching,” remembered one Block E regular. “They did a lot of things you couldn’t do today. If you turned in your AA medallion to the bar, they’d hang it up on the wall and you could drink free for the rest of the night. That used to happen every night.”

Years before, the bar had originated in a classier vein, when it was known as the 620 Club and was famous for its turkey sandwiches. The 620 was a massive place owned by boxing promoter Ernie Fliegel and future Minneapolis Lakers and Minnesota Vikings owner Max Winter, and the downtown movers and shakers would hang out there every night. (According to legend, the deal that sent the Lakers to L.A. was made at a back table in the 620.) In 1971, a new owner rechristened it Moby Dick’s, and for a while, Moby’s operated as a disco.

A Minneapolis Star reporter described Moby Dick’s whirlwind of excitement during a 1978 visit:

Pudgy matrons in dashikis, flirtatious girls in ruffled dresses, bearded youths with shoulder length hair, old men in pork pies and pulled coats, hot shots posing in white summer suits and hats next to bankers in stolid grey mingle in the low-ceilinged main room. Flamboyant glitter-rockers and sinister-looking super flies, everyday folks in jeans and sport shirts . . . By mid evening, the air in Moby’s windowless rooms is as dense as 800 smoking guests can make it. It is sodden with cigarettes, women’s heavy perfumes, patchouli from a smattering of long-haired youths, and whiffs of marijuana from the men’s room.

Another regular recalled, “I’ve never seen a bar before or after with such a mixed group of people. Businessmen, pimps, prostitutes, neighborhood people, and people from all walks of life and they all got along. And you really didn’t have to worry too much.”

The bouncers at Moby’s were big and tough and perhaps as legendary as the place itself. The most famous was named Clarence; if he didn’t like you, that was the end of your night there. The Moby Dick’s bouncers also may have done more policing than some of the cops who patrolled Block E. They did not always handle things properly, however. The record is scattered with various lawsuits charged against Moby’s bouncers for being excessively rough with unruly customers in the 1970s. In fact, watching people get bounced from Moby’s was almost its own form of entertainment, and provided the source of some of the best stories about the place.

“If someone was giving you a hard time, you’d just tell the bartender and the bartender or the bouncer would just throw the person out,” one regular patron said. “I remember one day I was walking along Hennepin Avenue with a friend on Block E. We were a few yards away from Moby’s, and this guy came flying out of the front door in the air, just like a cartoon, and landed on his butt.” 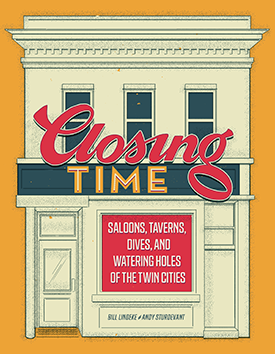 The flying exit from Moby Dick’s was a Hennepin Avenue staple, right up there with swingers strolling like Travolta down the wide sidewalks, or beat cops nudging a bum along his way.

“There were two methods of being bounced,” recalled another customer. “If they throw you out the front door, you didn’t do anything too bad, just enough to be thrown out. But if you went out the back door, you did something real bad. There was a dark alley back there, and they got in a little bit of trouble for beating people up back there. Anyway, you wanted to stay in line at Moby’s.”

“Moby’s is the perfect example of the type of cesspool that breeds crime; you’ve got to attack it,” declared the police chief at the time, and attack they did.

When the last closing time hit the bar, and the final crowd passed through the big door with the whale on the front, the bulldozers came for the old brick building. One city council member was so elated with the demolition of Block E that he composed a song for the occasion, to the tune of “Bye Bye Blackbird,” and sang it onstage at the ceremony for the new surface parking lot that would occupy the block:

Moby Dick’s is beached at last, problems vast, now are past,

No one here can stop and aggravate us,

No more hard-luck stories will deflate us.

Like much of the old downtown core, the site of Moby Dick’s, and all the other establishments that filled Block E, was just another parking lot for the next twenty years. Then, in the early 2000s, the city turned the block into the long-envisioned urban mall. Christened Block E, the new retail building opened to great fanfare in 2002. It even boasted a bar (Applebee’s) in the skyway level next to a multiscreen movie theater. Within less than a decade, most of the shops of the new Block E had failed, and the entire structure was eventually remodeled and rechristened Mayo Clinic Square in 2014. Somewhere underneath the new gray façade lies the grave of Moby Dick’s bar, and every once in a while, someone walking down Hennepin Avenue will invoke its name — a legend that has stood the test of time.

By Bill Lindeke and Andy Sturdevant