An ultimate political insider, Greek-born Elias Demetracopoulos never held public office but spent his long career operating in the shadows, working  to influence those who did.

Now, an American journalist,  James Barron, has brought Elias out of the shadows in a new biography, “The Greek Connection: The life of Elias Demetracopoulos and the untold story of Watergate.”

In the introduction to his biography, Barron described his subject as “a journalist, information broker, lobbyist,  trusted advisor, suspected foreign agent, impassioned democracy and free speech advocate, a man with friends and sources spanning the political spectrum.”

Elias forged his political connections mainly in Washington, D.C. where they touched two of Minnesota’s leading Twentieth Century politicians, Vice President Hubert Humphrey and U.S. Rep. Don Fraser. Other political figures, who played supporting roles in the Demetracopoulos story, included a father and son with Minnesota ties: Andreas Papandreau, a former University of Minnesota economics professor who served as Greece’s Prime Minister in the 1980s and his Minnesota-born son, George, who held the same office from 2009 to 2011.

Elias was born into a middle-class Athenian family in 1928, and his formative years were spent in a Greece buffeted by the Depression and World War 11.  While still a teenager, the young Athenian made a name for himself as a member of the Greece resistance battling the Nazis, who had taken control of his home country in 1941. Following the war and not yet 20, Elias decided that journalism would be his life calling. He parlayed his family connections and his strong English language skills into  a job as a cub reporter for an influential Athenian daily paper, the Kathimerini.

Within ten years, Elias had become one of Greece’s most influential journalists, with access to the country’s political movers and shakers. As Elias was about to turn 30, Barron described him as “a debonair man-about-town ..impeccably addressed in conservative British attire – an inveterate name—dropper, giving the impression that he had contacts everywhere in the world.” 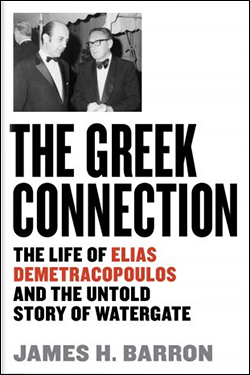 In 1951, Elias made the first in a series of regular trips to the U.S to report on the American political scene for his Greek readers back home. Ingratiating himself with Washington’s political and social elite, Elias was able to wrangle exclusive interviews with many of the nation’s political newsmakers.

Elias’s well-ordered life, shuttling between the U.S. and Greece, was disrupted when a coup by military leaders ousted Greece’s elected government in 1967.  Now marked as persona non grata  by the Greek junta and its supporters in the U.S. Embassy in Athens, Elias was in danger of being imprisoned. Using his  connections in Washington, he was able  to obtain a U.S. visa, enabling him to resettle in this country despite objections from some State Department officials.

In Washington, Elias ensconced himself in the Fairfax Hotel, where the popular Jockey Club became his base of operations. With ties to his Greek papers broken, Elias relied on his well-placed U.S. friends for support, reinventing himself as a lobbyist and political activist,  advocating for the cause of Greek democracy.

It was as a pro-democracy activist that Elias befriended Don Fraser, then a member of the U.S. House from Minnesota’s 5th Congressional District. Fraser had used his position as chair of a House Foreign Affairs subcommittee to spotlight human rights abuses by right wing regimes around the world that were receiving U.S. foreign aid. One of Fraser’s main targets was the Greek junta, that had instituted martial law, curtailed civil liberties and arrested and tortured dissidents.

Fraser became one of Elias’s chief congressional advocates, using the information supplied by the Greek activist in a series of highly publicized hearings about human rights violations by U.S.- supported authoritarian governments. While Fraser’s efforts to revamp U.S. foreign policy were rebuffed by the Nixon and Ford administrations, his landmark 1976 bill, calling on the State Department to assess the human rights status of aid-recipient nations, would later serve as the framework for a new focus on international human rights by the Carter administration.

But while Fraser played a key role in helping Elias promote his congressional agenda, it was another Minnesota political figure who was at the center of the activist’s more dramatic efforts in Washington.

That chapter in the story revolves around Elias’s discovery that the Greek junta had secretly funneled over a half million dollars in illegal campaign contributions to the Nixon presidential campaign in 1968. Elias shared his findings with Humphrey Campaign Manager Larry O’Brien, hoping that O’Brien would intercede with Lyndon Johnson and persuade Johnson to obtain CIA confirmation of the transfer. O’Brien did raise the issue with Johnson, but the president refused to intercede, and the story remained buried until after Nixon left office.

Elias remained convinced that if information about the money had been made public before the November election, it would have been a big enough bombshell to sink Nixon and elect Humphrey (who lost the race by less than 1 percent of the vote). For the rest of his life, Elias continued to nurse regrets about what he had hoped would be the high point of his career.

When Elias died at the age 87 in 2016, an obituary in the New York Times noted that “his ambiguous role as a journalist with a political agenda … and a cadre of allies and enemies defined him a cryptic character who conducted business from a telephone -equipped table in the Jockey Club.”

James Barron has provided a highly readable account of the life and times of this “cryptic character” who cut such a broad swath through Washington’s political and social life. History enthusiasts will want to add the Greek Connection to their reading list.

Greece, Nixon and the man who almost made Hubert Humphrey president