Minnesota Independent’s Paul Schmelzer on the continuing car-ballot bamboozlement, including a new one: Sean Hannity’s “What about 32 absentee ballots all going to Franken — every one of them?!”

As yesterday’s MinnPost piece noted, Franken got 18 votes among the 32 absentee ballots, while Coleman got seven.

Pawlenty does not correct Hannity on this undisputed factual error. Perhaps the governor is ignorant, but isn’t it someone’s duty to give him the facts? Especially when he is representing Minnesota to the nation?

Another original Hannity whopper: “Under normal practices, both candidates would expect a bump.”

No. As MPR’s Tim Nelson conclusively showed, some candidate totals go up, others go down, and it happens in every election. In fact, it happened to Pawlenty, whose post-election total dropped in 2006.

Then there’s the golden oldie: “The Minneapolis director of elections claims to have found 32 absentee ballots hiding in the trunk of her car.”

As you all now know, no she doesn’t.

For good measure, Fox throws up one of their legendary fake graphics of some random car with an arrow pointing at the trunk: 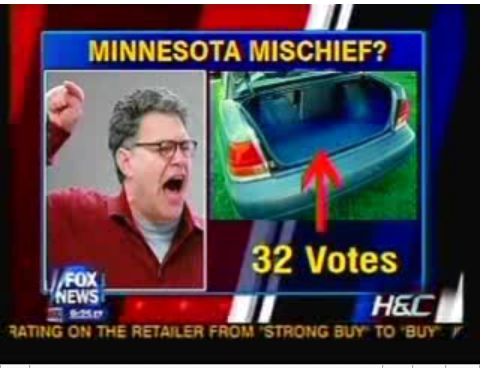 Pawlenty, frankly, abets this in a way unbecoming to his position and the state of Minnesota:

“Finding 32 ballots in the trunk of a car and supposedly forgetting that they were there is suspicious. … If your job was to transmit ballots from the precinct to the county or the county to the state, you wouldn’t throw them in your trunk and forget about them.

“This election officer said they threw them in there and at no point was his or her car outside of their supervision. … It seems fairly clear that that’s an act that should not of happened.”

Again: It didn’t happen. The election officer never made such a statement and if fact says the ballots were never in her car.

And the governor doesn’t even know his own state laws, which require absentee ballots come to central collection points and be tranported to precincts on Election Day. To do that, election officials all over the state use cars.

I don’t blame Pawlenty for being a partisan; if he wants to dispute the Minneapolis election director’s account, bring a factual rebuttal. But this is passing on, giving credit to, and amplifying obvious falsehoods.

How can we get him to stop?