It’s not “Lizard People,” but surely the day’s weirdest recounted ballot come from Becker County. According to Detroit Lakes’ DL-Online: 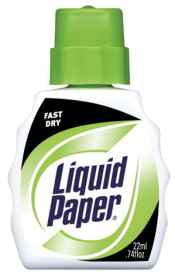 There has been one challenge so far in the two hours of recounting. It comes from the Coleman campaign.

[Becker County Auditor-Treasurer Ryan] Tangen said the issue is a vote that is marked clearly for Franken, but the oval for Coleman appears to be covered by correction fluid.

Do you or anyone you know carry around correction fluid? Much less try to use it on a ballot?

There are bigger problems in Becker County, since the county just discovered 61 ballots uncounted on Election Day or in the canvass. [Hat tip to Minnesota Independent.] They were in proper custody, but not transferred to precincts for counting.

Don’t expect GOP spinmeisters to make a big deal of this, a la the Minneapolis car-ballot fiction. As DL-Online notes, “Coleman carried Becker County by 2,400 votes in the original count.”