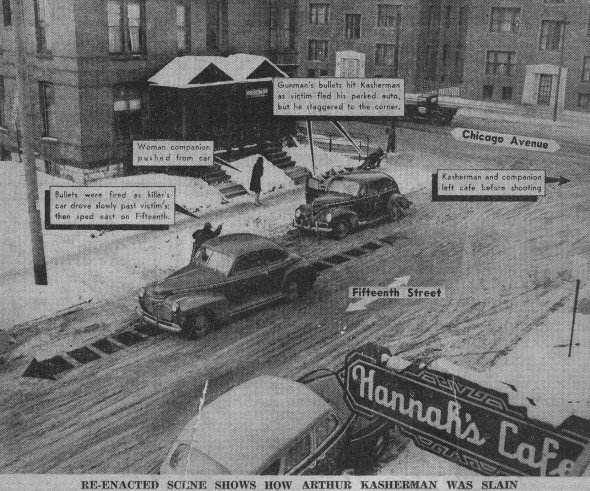 Called “Rubbed Out,” the project was a side job for the two men; the site includes the original police report; reproductions of Kasherman’s scandal sheet, the “Public Press”; a video recapitulation; map of the dirty deed (which involved a stabbed tire and a gal with a shiner); a line-up of suspects; and Shiffer’s narrative look-back.

Shiffer doesn’t glorify Kasherman, who sounds more like a palooka than Pulitzer finalist; the scandal-monger sported an extortion conviction and other legal scrapes. Kasherman’s prose is long on purple and short on specifics (Shiffer likens him to a blogger) but the site makes a pretty good case for the man’s historical importance. Kasherman was the last of three muckrakers to be murdered in the city, and even if he was the least respected, his killing was adroitly leveraged by forces backing an insurgent candidate for mayor, Hubert Humphrey.

What’s neat about this is that Shiffer, a relatively recent transplant, cares so passionately about his adopted city, and still bristles over the lazy police investigation of a shirt-tail professional relative almost seven decades later. He was smart to enlist Ewen, a “digital native” who’s one of the best young journalists in town. (You can check out Ewen’s appearance on last Friday’s “Almanac” here.)

Leveraging the resources of the Strib, Minneapolis Police Department, Minnesota Historical Society and the Hennepin County Library, Shiffer and Ewen have made faded times come alive, an “L.A. Confidential” for the Mill City that takes us from the digital era to a time of dames and dime-drops.