Noticed that colleague Eric Black’s Civil War Anniversary post, “What if Lincoln had allowed the South to secede?” is getting a lot of page views and comments, including from readers fiddling with “What America would look like now” scenarios. 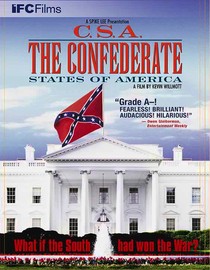 So I thought I’d throw a recent film on the hopper for those who might not be aware of it. “C.S.A. The Confederate States of America” came out in 2004, an Independent Film Channel/Spike Lee production.

The dystopia goes further than Black’s scenario. In this one, the South doesn’t secede, it takes over the North and chases Lincoln to Canada — and that’s probably the flick’s biggest weakness. The parody (set in modern-day America) is frequently overbroad and the acting is, well, mediocre at best. But it’s not a waste of time; some of the most outrageous “C.S.A.” moments are firmly grounded in post-Civil War history.

It’s available via Netflix Instant Viewing. Despite its flaws, this fan of dystopian fiction found it an interesting 89 minutes.

What if the South had won the Civil War?