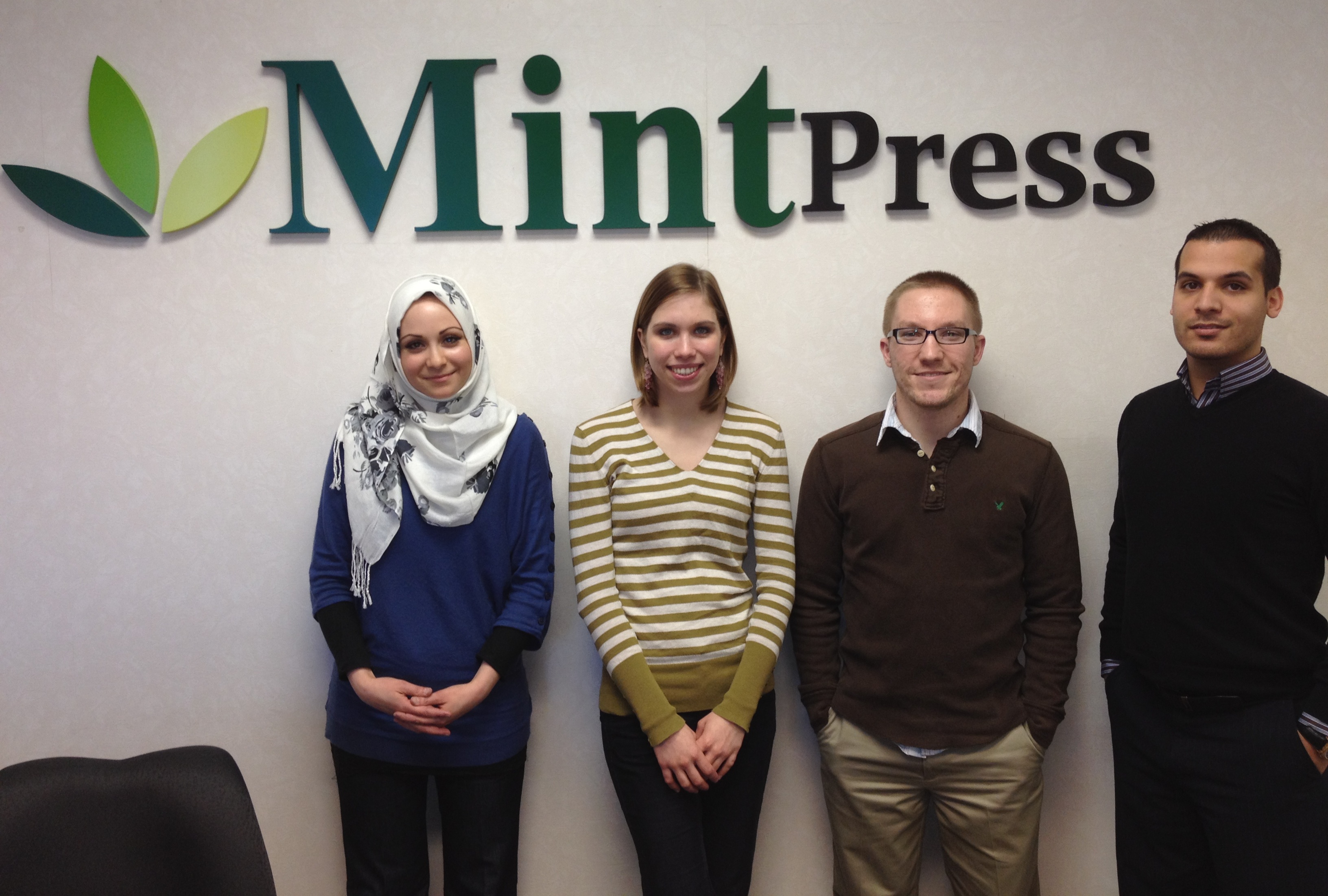 If 24-year-old Mnar A. Muhawesh’s dreams come to fruition, a low-rise Plymouth bank building could become the headquarters of an international media success story.

Last week, Muhawesh’s news site, MintPress, quietly debuted. But careful observers of the local j-scene couldn’t miss it coming: For months, it seemed like every other ad on journalism help-wanted sites was a MintPress position.

Today, Muhawesh — a St. Cloud State journalism grad and former KARE11 intern — presides over a staff of seven (including six full-timers), with plans to hit 15 soon. (She was finalizing a deal with a New York/Washington correspondent when we talked.) Though the warren of offices contain some empty desks, there’s a pro-looking logo affixed the building’s front, matched above the receptionist’s station, and three flat-screen TVs, tuned to CNN, Fox and Al-Jazeera. 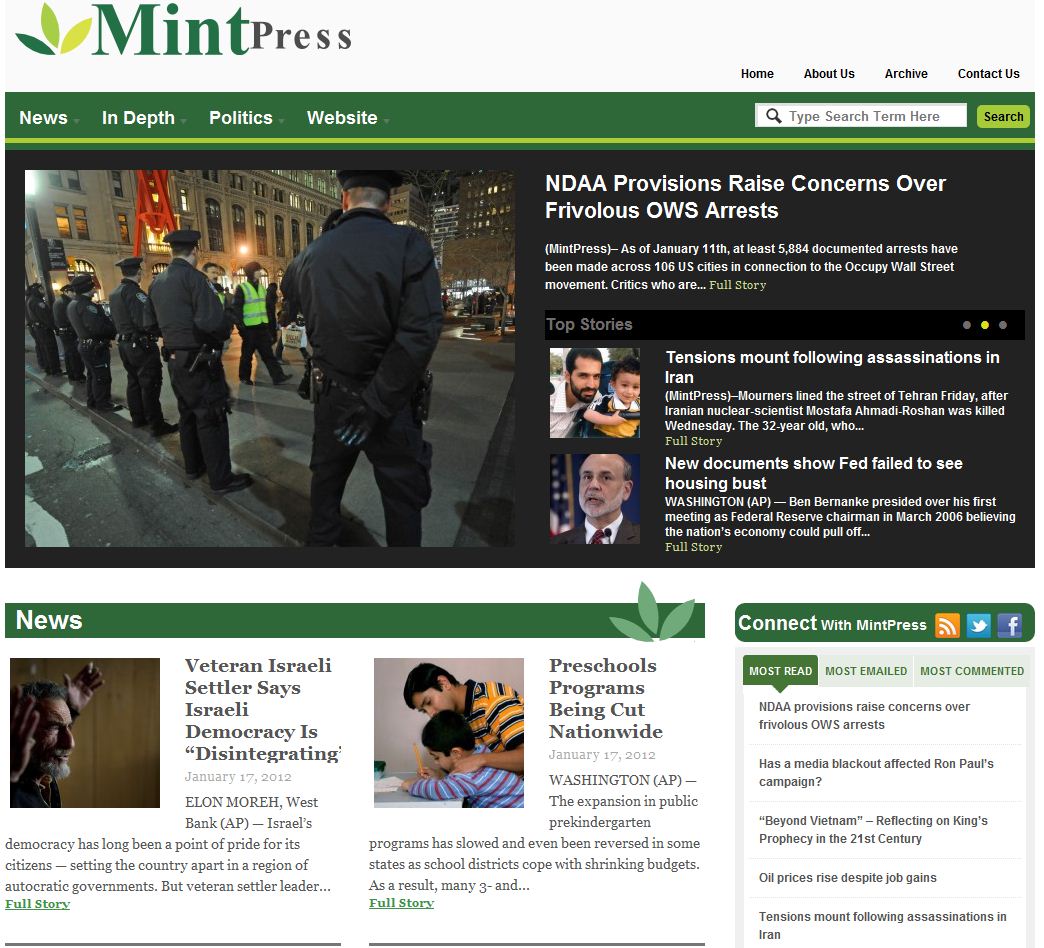 “We’re very big on being part of a social movement worldwide,” she explains, tracing an arc from the Arab Spring in the Middle East to Occupy Wall Street in the United States. “We want to ask more questions about policies, social issues, how we can rebuild this country,” Muhawesh says.

“We’re not bashing the system, we’re covering issues — what’s worked and what hasn’t worked,” she adds. “When I look at stations like national Fox News — fair and balanced — the message they promote is violence and hate, not understanding. MSNBC, they make fun of, or bash, without bringing solutions to the table. Right now, our country is in decline, and our media has absolutely failed our country.”

Muhawesh is enough of a system non-basher to constitute MintPress as a for-profit — “a regular news organization.” She has a three-year break-even plan, based on advertising.

Muhawesh has investors, “retired businesspeople” whom she will not name — unfortunate for a journalism operation fighting alongside people seeking transparency. (The site’s “About Us” page is similarly skinny.) Her father-in-law Odeh A. Muhawesh — an adjunct St. Thomas theology professor, and veteran Twin Cities businessman — is a key adviser.

Still, “everything we’re doing now is my idea,” Muhawesh says. “I found the investors.”

Muhawesh says she got the idea for the online-only MintPress — “Mint leaves are refreshing and invigorating” — after her KARE internship, where she produced stories and online content for the 4 p.m. news. She began freelancing, and one of her clients, a Lebanese start-up, began asking her for advice on pulling off an online site. She decided she had enough of a vision to do one herself.

Muhawesh’s early corps of correspondents includes Joey LeMay, who left a copy editing job with Gannett Co.’s St. Cloud Times. Ditching corporate bureaucracy for an independent site where he can write national and international explainers “really is my cup of tea. We’re not trying to follow day-to-day news, compete with CNN, the same old story. We want to provide more.”

One of LeMay’s first stories focused on a 2007 speech by Rick Santorum in which the Republican presidential candidate pushed to “’evangelize’ and ‘eradicate’ parts of the Middle East and Islam because of what he called ‘Islamo-fascism.’”

LeMay says the speech “was remarkably inflammatory toward Islam. If Ron Paul’s [allegedly racist] newsletters get so much coverage, we figured, why not this?”

Muhawesh is a Muslim who adopted the hijab in college in a nod to tradition and modesty. Although MintPress was inspired in part by Tahrir Square, Muhawesh indicates it’s the non-denominational aspects of that uprising — the OWS aspects — that guide MintPress.

“I don’t bring Islam into my news programming,” says the Maple Grove native, a daughter of Palestinian immigrants. “Still, growing up in our Palestinian household, it was natural to know more about the world. Always in junior high, I knew what was going on in the world more than [other] students. If you understand U.S.-International relations, you’ll understand our policies.”

MintPress’s home page reflects a site that pays attention to the Middle East, but is not fixated on it. Staff bylines included reflections on Martin Luther King’s legacy, Ron Paul’s media coverage, and a possible recall of Montana congressmen who backed the controversial National Defense Authorization Act.

Another Mint reporter, Janessa Schilmoeller, examined whether the NDAA, which allows indefinite detentions without trial for U.S. citizens engaging in terrorism, could affect Occupy Wall Street. She interviewed the director of a site that has tracked 5,884 arrests and OWS’s $40,000-a-week bail needs. Schilmoeller, a St. Kate’s grad, has worked in international leadership programs and mentored students from around the globe.

(A third correspondent, Carissa Wyant, has reported for the Minneapolis-St. Paul Business Journal and KMSP-TV. Muhawesh’s brother-in-law Muhammad is a news producer.)

In the case of the Santorum story, there was no defense from the candidate or his campaign; there was also no pushback to the OWS claims. Muhawesh does not claim objectivity — “we want to fix the system,” she says, adding “we want peace, not war” — but says as the site departs its trial week, reporters will seek out authorities, too.

MintPress stories will increasingly displace licensed Associated Press content, and Muhawesh plans to salt in veteran correspondents with the fairly young staffers currently filing. She says she got “hundreds and hundreds” of applications — some from locally recognizable names — even though MintPress will have “no indication there’s a Minnesota standpoint on anything. We are a national website based in Minnesota.”

Muhawesh says she wound up hiring journalists not merely for skill but “for passion, who went into journalism to make a difference. These are the people we call back.”

Mint Press’s Facebook page is here, its Twitter page is here and a mini-profile of Mnar Muhawesh is here.

Who is MintPress and why are they doing all this hiring?