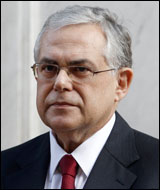 Papademos will lead an interim caretaker government that will oversee the country and continue financial aid talks with Europe.

Papademos has significant experience in the financial sector.

He joined the Bank of Greece in 1985 as chief economist and rose through the ranks until being appointed governor in 1994 — a position he held until 2002. Papademos moved on to the European Central Bank in 2002, where he served as the vice president until 2010, when he left to become a visiting professor at the Harvard Kennedy School of Government.

Though not a politician, Papademos is well regarded across Greece and Europe, writes The Wall Street Journal.

Papademos, who has taught at Harvard University since leaving the ECB in 2010 and is an economic adviser to Papandreou, “is widely known and respected in Europe,” a senior Pasok official said.

The former ECB official brings with him a long financial policy pedigree that could reassure other euro-zone leaders and financial markets, where confidence in Greek debt-crisis management this week reached a new low.

While Papademos has avoided getting overly involved in politics — he turned down an opportunity to join Papandreou’s cabinet as finance minister last summer — he has served as an economic adviser to Papandreou.

And importantly, given the debt crisis that Greece and Europe are faced with, Papademos is intimately familiar with the relationship, having been the “architect of Greece’s eurozone entry,” writes Deutsche Presse-Agentur.

In 2002, Papademos assisted the Greek government’s transition from the drachma to the euro and entry into the European Union, winning “widespread respect in Greece,” according to the DPA.

DPA adds that Papademos’ reputation was not affected by the later revelation that Greece had hid from the EU the magnitude of the Greek deficit, perhaps because Papademos had advocated cutting the debt. The Daily Telegraph notes that Papademos emphasized that governments must be responsible for their debts.

“The ECB’s interventions in sovereign bond markets should not be perceived or interpreted as a ‘freebie’ for governments,” [Papademos said.]

“They are temporary. Governments cannot assume or expect that the ECB will always facilitate their funding independently of the achievement of their fiscal and other policy objectives.”

Though Papademos was born in Athens, he received his undergraduate and graduate degrees in the United States at the Massachusetts Institute of Technology in Cambridge. After receiving his doctorate in economics, Papademos taught at Columbia University in New York and at Athens University.

Arthur Bright is a correspondent for the Christian Science Monitor.