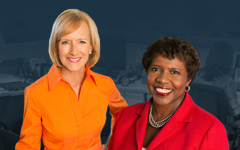 If you watch the PBS “NewsHour,” you’re a member of an increasingly select group. The “NewsHour” has lost half its audience in the last eight years, reports TV critic David Zurawik: from 2.5 million nightly viewers in 2005 to 1.3 million now.

Even more startling are the local viewership numbers. In the Twin Cities, only about 1,800 people in the 25- to 54-year-old demographic watch the “NewsHour,” according to the latest Nielsen ratings. (The 25-54 demo is the age group most coveted by advertisers.) With about 1.78 million Twin Cities adults in that demo, a Nielsen rating of 1 equates to about 17,800 viewers. The “NewsHour” gets a rating of 0.1 —that’s right, zero point one, or one-tenth of a rating point.

But the local TV news operations don’t have a lot to feel good about, either. Here are the 25-54 numbers for the local 5 p.m. newscasts:

The 25-54 numbers for the 10 p.m. newscasts are better, but far below what they were a decade ago. In fact, like the “NewsHour,” they’re probably around half of what they were.

Although its audience is shrinking, TV can take some consolation in being America’s No. 1 news source. Surveys consistently show that more of us get our news from TV than any other source — even the Internet.

About 55 percent of all adults watched TV news on a given day, according to Pew Research. Meanwhile, 39 percent got news online and 29 percent read a newspaper.

But the TV news audience is graying, with viewership dropping steeply among younger age groups. While 73 percent of those over age 65 watch TV news, only 34 percent of those ages 18 to 29 do.

TV news — and radio, for that matter — faces the same issues as print media. It’s an older medium that retains the loyalty of many who grew up with it but has trouble creating new loyalists among younger consumers who have more choices.

Twin Cities TV journalists, on the whole, are an appealing, hard-working bunch. But anyone under 35 in a TV news job has to wonder whether there will still be an audience for their work when the Greatest Generation and the Baby Boomers are gone.

TV news is losing its audience, particularly the young