The inaugural banquet was quite a gala affair, according to the reporter for the local newspaper. The guests included the future mayor and the town’s leading businessmen.

The year was 1858. Minneapolis’ movers and shakers had come together to celebrate the opening of the Nicollet House, the lodging place that would become the center of the city’s social life during its early decades.

Within 40 years, the hotel would lose its place at the pinnacle of local society as the movers and shakers moved on to newer, more modern places. By the 1920s, the Nicollet House, by then known as the Nicollet Hotel, had fallen on hard times. In 1923 it was demolished and replaced by an updated facility with the same name.

The Nicollet House and the Nicollet Hotel have long since disappeared from the downtown landscape. Today, their prime Washington Avenue site, now a windswept parking lot, is slated for a major new development. Several high-powered real estate groups are vying to fill the site with massive towers, reaching as high as 80 stories. Over the next decade, a high-rise development on the Nicollet Hotel site is likely to become downtown’s iconic 21st-century landmark.

When it was built, the four-story Nicollet House was the major landmark for a tiny frontier settlement hugging the west bank of the Mississippi River. Construction had started on the yellow brick Italianate-style building in 1857, shortly after the new town of Minneapolis received its corporate charter from Minnesota’s territorial legislature. The next year, on May 28, the hotel’s inaugural banquet was held, just two weeks after Minnesota became a state.

The local paper, the Minnesota Republican, reported on the banquet, noting that “guests assembled in the handsome parlors in the early evening and indulged in temperate dancing. The supper, prepared by the proprietors, was put on the table with consummate skill and grace.” 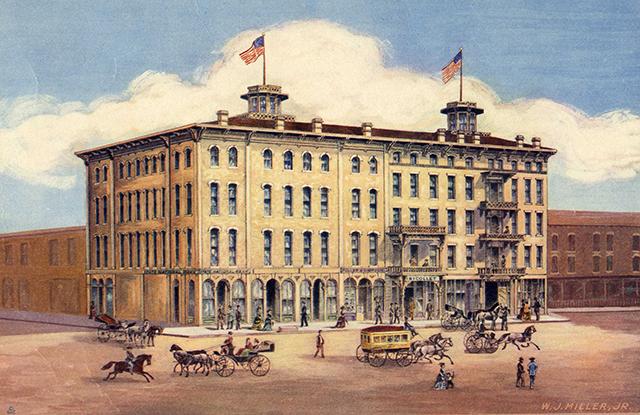 During its early years, the Nicollet House, with its lace curtains, mirrored parlors and plush furniture, brought a touch of sophistication to a raw frontier community composed of ramshackle frame buildings surrounded by muddy streets. Despite its elegant furnishings, the hotel had little in the way of modern conveniences, even according to the standards of the day. Initially, water was supplied by a single pump at the back of the building. During winter months, the building’s overworked stoves and fireplaces did little to erase the chill in the hotel’s 90 rooms.

Even so, the Nicollet House was the place to stay in Minneapolis as the city began a post-Civil War economic boom. Guests included three U.S. presidents – Grover Cleveland, William McKinley and Theodore Roosevelt — along with other local and national notables.

“In its rooms were talked over and planned many events that afterward loomed large in the business and political history of Minneapolis and the Northwest,” noted one early observer. “There, politicians made and unmade men in momentous conferences.”

By the early 1920s, as Prohibition was tightening its hold on the country and the life of the original Nicollet House was coming to an end, a reporter for the Minneapolis Tribune looked back at the hotel’s glory days in the 19th century. “In the bar room of hallowed memory,” he recalled nostalgically, “Kentucky whiskey, mellow with age, sold for 10 cents in a pony tumbler of cut class that shimmered in the light like a gilded dream of lotus land.”

The reporter went on rhapsodize about the hotel’s dining room, then the site of the “the most famous balls in the history of early day Minneapolis,” with “ladies in evening gowns and trains and gentlemen in high collars, flowing ties and full dress regalia.”

With the wrecking ball about to fall in March 1923, a group of local civic leaders organized a farewell banquet for the old hotel that was such an important part of the city’s early history. At the all-male event, “the guests will wear stove pipe hats and clothes that were ultra-fashionable in the days when the hotel register received its first signatures,” the Tribune reported. “They will puff corncob pipes and sing old time songs.”

The paper reprinted a poem composed especially for the farewell banquet. The last stanza read:

From out of the crumbling ruins,

Dust and ashes of the past,

A nobler structure than the last.

These words, written 90 years ago, take on new relevance as Minneapolis waits for new towers to rise “Phoenix-like” from the Nicollet House site. It remains to be seen whether the new development will be “a nobler structure than the last.”

Nicollet House was Minneapolis’ social center in the late 1800s