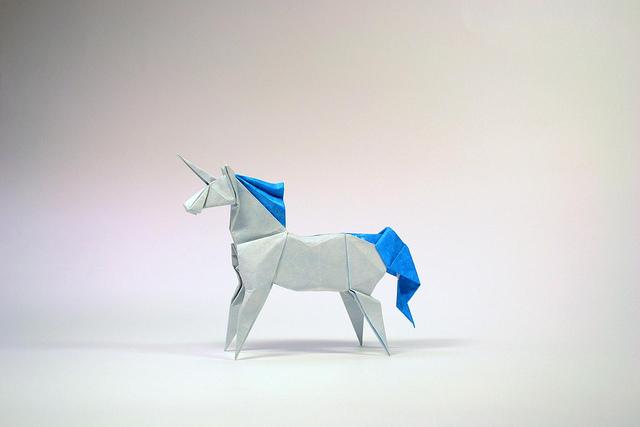 CC/Flickr/yosuke muroya
Technology and finance mavens have coined two new buzzwords to describe recent startups that are suddenly achieving enormous valuations: “unicorns,” for those believed to be worth more than one billion dollars, and “decacorns” for the unicorns valued at more than $10 billion.

Another tech stock bubble? Well, yes, but this time is different. As one Silicon Valley player observed, if the bubble of the late 1990s reflected “irrational exuberance,” today’s run-up looks more like “selective exuberance.”

This month marks the 15th anniversary of the dot.com crash — the stunning collapse of scores of Internet-related stocks that had rocketed, equally stunningly, to stratospheric levels from roughly 1997 to 2000. It’s taken the tech-heavy Nasdaq Composite index almost half a generation to crawl back above 5,000. That finally happened on March 2, when the index wound up at 5,008. The last time it had closed above 5,000 — on March 10, 2000 — marked the start of a steep and enduring decline.

Now eyes are rolling once again at the frothy valuations being assigned to tech companies. Technology and finance mavens have coined two new buzzwords to describe recent startups that are suddenly achieving enormous valuations: “unicorns,” for those believed to be worth more than $1 billion, and “decacorns” for the unicorns valued at more than $10 billion. Near the top of the heap is Uber, the San Francisco-based, mobile phone-enabled ride-hauling service said to be worth $41 billion. That’s almost halfway up to the $104 billion value of 113-year-old 3M, yet Uber has been around for just six years. Last year, Facebook paid $19 billion to buy Whatsapp, a 5-year-old instant messaging service founded in 2009. Then there’s Snapchat, a photo messaging service founded in 2012. Snapchat is valued at $10 billion, yet in 2013, it lost $138 million on revenue of just $10 million.

This is starting to look like what happened when those dot.coms went crazy back in the late 1990s, but a glance at the Nasdaq Composite takes us quickly to much of what’s different this time. As New York Times financial columnist James B. Stewart recently wrote, today’s index bears little resemblance to that of 2000. Its changes mirror the rough and tumble of “creative destruction,” which economist Joseph Schumpeter defined as a hallmark of capitalism. Only four of the 20 most valuable companies in the index 15 years ago — Microsoft, Cisco Systems, Intel and Qualcomm — are in the top 20 today. Eight no longer exist as independent companies. Apple, the leader in the index today, barely registered in 2000. Now it’s the world’s most valuable company, worth $718 billion. Google, now the second most valuable company in the index, went public in 2004,with a market value of $23 billion; today, it’s worth $373 billion. Facebook, another freshly minted hitter in the index with a $233 billion value, didn’t even exist in 2000.

And yet, adjusted for inflation, the Nasdaq Composite would be at nearly 7,000 today. One reason it still lags: The stocks of some tech giants remain far below their levels at the peak of the earlier bubbles. Intel, for example, is valued at $152 billion vs. $468 billion in March of 2000. Cisco, $130 billion today, was $474 billion then. Another reason: Those unicorns, an entirely new class of companies, are not in any stock index because their shares aren’t publicly traded.

The future is here

But perhaps the cumulative and now pervasive impact of the rush into the digital age is the biggest reason this time looks different. It turns out that the bubbly investment climate of the late 1990s helped to lay the groundwork for continuing this swing.

“It took a lot longer than we thought it would for the future to arrive, but now it’s here,” says Andrew Odlyzko, a University of Minnesota mathematician and former head of the university’s Digital Technology Center. Odlyzko argues that thanks to increasingly powerful software, faster computers, now ubiquitous smartphones and other pivotal changes, the Internet-based innovations of the 1990s have now settled in on a grand scale.

As was the case in the earlier dot.com and telecommunications speculative booms (actually two separate but related investment bubbles), many of these companies — 43 of the 83 — are based in California, most of them in or near Silicon Valley. Another 20 are scattered across the U.S., none in the Midwest. Two-thirds of them weren’t even around before 2007. Unlike the waves of Internet-related companies with soaring valuations in the late 1990s, 13 are based in China. Beijing-based Xiaomi, which has the highest valuation on the list at $46 billion despite being just 5 years old, is the world’s third largest distributor of smartphones. The list includes other companies that have quickly become well-known names: Airbnb (lodging, valued at $13 billion, founded in 2008); Pinterest (social media, $5.1 billion, 2008); Spotify (music, $4 billion, 2006).

Over the weekend, the Wall Street Journal published a story defining these companies slightly differently from the way Fortune did. A Journal investigation identified 78 privately held unicorn-like companies, started recently and backed by venture capital firms. Each of these companies is worth at least $1 billion. Altogether, they are worth $310 billion, based in the valuations placed on them by their most recent investors. The Journal found that Wall Street middlemen are spurring a “shadowy market” that “marks a dramatic shift in how wealth is being created during the continuing technology boom compared with the dot.com bubble of the 1990s.”

Then, the biggest gains came after companies went public. Now, some of the companies’ employees are trying to cash in by selling their shares before the companies go public. Venture firms are pouring money into them and bringing in other large investors as partners, thus enabling the companies to stay private longer. The Journal cited Facebook as representative of the shift. It was worth $104 billion when it went public in 2012, almost half of its value today. In contrast, Amazon.com was worth just $400 million when it went public in 1997 vs. $171 billion today.

Well-heeled investors are scrambling to help finance the unicorns. They are typically large institutional investors — mutual funds, hedge funds, investment banks. pension and 401(k) funds and sovereign wealth funds — hoping to profit from immense run-ups as the values of these companies soar.

Skeptics say fuzzy math is supporting the surging valuations, echoing criticism that preceded the crashes of the dot.coms and telecoms. Often, large investors in the unicorns get special treatment to protect them from steep declines in valuations.

The Journal reported that hedge fund manager Jonathan Sands touted “astounding” the potential gains in Uber, predicting the company would earn $7 billion before interest, taxes, depreciation and amortization by 2018. Anant Sundaram, a finance professor at Dartmouth College’s Tuck School of Business who studies valuations of private companies, told the newspaper that this forecast was “outlandish.” Steve Leuthold, a Twin Cities money manager who has chronicled investment cycles for decades, adds that Uber could be adversely affected as local governments impose more regulation on the company.

But no matter what happens with these heady valuations, technology marches on. Gary Smaby, a former financial analyst and longtime computer technology expert in the Twin Cities, says that today anyone can buy a smartphone for $50 or so, to do the work of a $30 million computer a generation ago. Technology cheerleaders and many of the rest of us justifiably hail the benefits of such progress. For a deeper, more thoughtful and less optimistic perspective, see Nicholas Carr’s 2014 book, “The Glass Cage.”

Correction: The initial version of this story reported Apple’s smartphone shipments incorrectly. The company accounted for about 15 percent of the roughly 1.3 billion smartphones shipped last year.