Bill Foussard is a big fan of Spotted Cow beer. Whenever he’s in Wisconsin, he stops to enjoy a draught.

But he won’t sell Spotted Cow at his restaurant in White Bear Lake, Rudy’s Red Eye Grill. He can’t.

“Not available,” he tells you. “Only in Wisconsin.”

But we actually knew that already, didn’t we? Earlier this month, felony charges were filed against two men connected to the Maple Tavern in Maple Grove: bar owner Brandon Hlavka and manager David Lantos. Their alleged crime: In April 2015, the two men bought 10 kegs of Spotted Cow in Wisconsin, brought it across the border and sold it at the Maple Tavern without a license.

All of which seems like a pretty egregious flouting of the rules that govern booze sales in Minnesota.

Foussard, for one, says it was “stupid” for the barmen to try to side-step the state’s complicated liquor regulations.

“It’s a privilege to have a liquor license; there are a lot of rules, but you’ve got to follow them, go through the proper channels,” he said. “It might seem harsh — a felony charge — but you can’t mess around.”

Hennepin County Attorney Mike Freeman agreed. “We’re not picking on these bar owners. They know the rules,” he said. “If a bar owner violates the rules they pay a price. We’re not seeking a prison sentence, of course, but there will be ramifications.”

Freeman notes that he doesn’t make the rules, he enforces them. And law on this one is clear: State statute 340A.701, subdivision 2, says it’s a felony to: “to transport or import alcoholic beverages into the state in violation of this chapter for purposes of resale.” 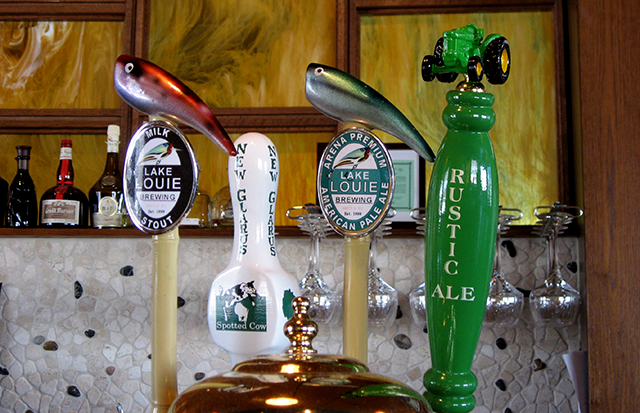 Creative Commons/Shihmei Barger
New Glarus co-owner Deb Carey said New Glarus could expand wildly, and successfully, if it chose to do so.

Officials say the rules allow them to regulate production and sales, thereby making sure that products are safe. They also keep a level playing field for sellers. And they assure that the license fees and taxes flow into the government coffers.

Minnesota is one of the stricter states when it comes to alcohol laws and regulations. There are no Sunday liquor sales, nor can alcohol be purchased at grocery stores or gas stations. (And, lest we forget, the act initiating prohibition has the dubious distinction of being named after a Minnesotan: Andrew Volstead, a Republican from Granite Falls.)

But all states have some kind of beer distribution and licensing rules.

Scott Wasserman of the state Department of Public Safety said every state has similar rules, and says beer makers who want to sell in the state can contact the Minnesota Alcohol and Gambling Enforcement Division to get the proper licensing. But in the Spotted Cow case, the New Glarus Brewing Co. of New Glarus, WI, doesn’t want sell its beer in Minnesota.

‘There’s no reason’ to sell in Minnesota

Spotted Cow is described by its makers as a “traditional farmhouse ale, hand-crafted and unfiltered with complex flavors.”

The owners say they don’t want — or need — to deal with the byzantine tax and distribution systems that come with selling their beer outside their home state. “There’s no reason,” said New Glarus co-owner Deb Carey. “We’re growing so fast and it’s still hard to keep up with demand here.”

She and husband Dan have been brewing in New Glarus since 1993. They have no ambitions to expand nationally or globally. Instead, Deb Carey said, they’re “committed to brewing world-class beer and taking care of the people who work for us.” 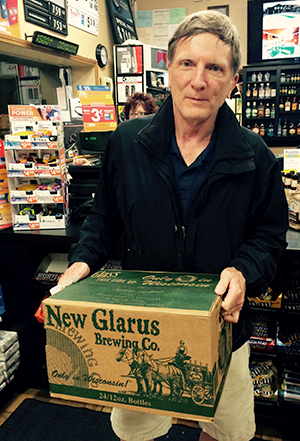 Photo by Julie Kramer
The author buying a case of Spotted Cow at a Wisconsin
gas station last May.

She said they’d rather steer the conversation about beer away from the theme of constant growth and toward the appreciation of a good brew. “We want to talk about beer being a food, with a rich history,” said Deb. “About how it’s hard to make, has a wide range of flavors, is very accessible and can add pleasure to life. And that we should treat it with respect.”

And she thinks there’s much to be said for regional diversity. “From my point of view, when you get off a plane you don’t want to see one chain store after another and everything looking just like it does at home. Like everything else, I think food should have a regionality to it.”

Still, she wasn’t surprised to hear about the Maple Grove case. It’s happened before. A New York City sports bar was caught in 2009 selling Spotted Cow for $7 a bottle. Again, no license or distribution rights to get it from New Glarus to the Big Apple. The owners paid a $20,000 fine.

“Sure, I’m flattered that people like it so much, and a felony seems like a heavy price to pay, but c’mon,” she said. “They knew the rules,” she said.

Carey said New Glarus could expand wildly, and successfully, if it chose to do so. “We could be worldwide, if that was the goal. It’s absolutely in my power and it wouldn’t take very long,” she said. “But why would I?”

As for Minnesotans looking for a taste?

“It’s not that hard,” she said. “Cross the border. Even gas stations sell it.”