Waverly, Minnesota, might seem like an unlikely place to find a business with a global diversity of workers to rival a United Nations conference. But here they are.

Each growing season, workers from Ukraine, Mexico, South Africa and sometimes other countries make their way to Untiedt’s Vegetable Farm, an hour west of the Twin Cities, to help plant seedlings, tend to plants and harvest produce.

The workers aren’t American citizens, but they are here legally; they have H-2A visas, a temporary permit that allows people from other countries to do seasonal agricultural labor in the U.S.

The program is growing in Minnesota. Between 2011 and 2015, the number of H-2A workers requested by Minnesota companies more than doubled, from 512 to 1,177 (data include only approved applications). That’s small compared to the more than 8,000 requested in California in 2015, but it’s a number that could continue to grow as demographic change empties rural areas of Americans willing and able to do agricultural work.

Mariana Pykivska, 28, recently arrived in Waverly from Vinnytsia, Ukraine, to work at Untiedt’s for the seventh year in a row.

Pykivska’s home for the summer is a small white house near the Untiedts’ home. Employers are required to provide housing to H-2A workers, free of charge, and transportation to and from their home country. Eight Ukrainian guest workers share this three-bedroom, two-bathroom house, which is outfitted with a kitchen and laundry machines. There’s a flower box full of zinnias on the front steps and a vase with peonies on the table.

Pykivska first came to the farm as a student in an exchange program in 2011.

“I came here just graduated (from university). You don’t know particularly what you want to do. It was hard for me to find a good job in Ukraine,” she said. “There was this chance to go abroad. I said I’ll just try it,” she said.

The next year, she was invited back to work as an employee, and has returned every year since.

For her, the work is about accomplishments — passing a driver’s exam, meeting new people, learning new things. When she first came, she could understand English better than she could speak it. Now, conversation is much easier. 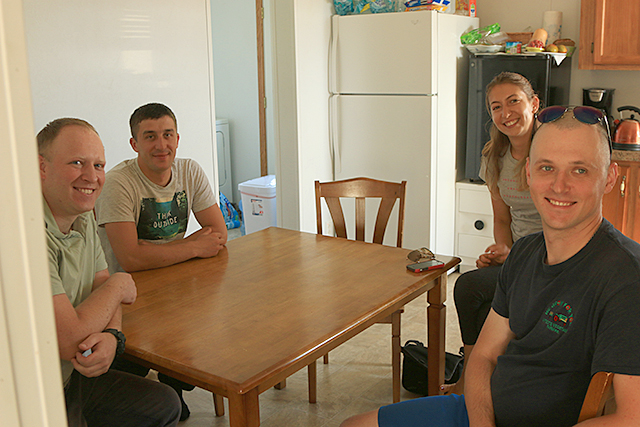 She spent her first year in the greenhouses and fields, planting and weeding. In recent years, her job has been to work the farmers markets.

“You work hard, (but) you get paid enough,” she said. In Minnesota H-2A workers are paid a minimum of $12.75 an hour, a rate called the Adverse Effect Wage Rate, which is set by the federal government.

Working at that rate for the season is enough for he and others to live off of for the rest of the year when they return, said Alexander Oleksandruk, 34, who picks up odd jobs back home to supplement that income.

Then, there’s a cultural exchange aspect of the program, too. Oleksandr Sudoma, 29, learned new techniques to grow raspberries in Minnesota, which he brought back to Ukraine, where crop-tending techniques tend to be less sophisticated than in the U.S. He and his brother now run a raspberry business together back home.

The relationship between the farm and its foreign guest workers is a symbiotic one, but it probably wouldn’t exist without shifting demographics, which in turn, have changed economics.

Forty some years ago, when the Untiedts started their business, they didn’t need foreign farm workers. At the time, they had no trouble finding locals who could work seasonally to help out on the farm.

“We had college students, teachers who had their summers free, retired but not tired people, all kinds of very available local help,” said Jerry Untiedt. 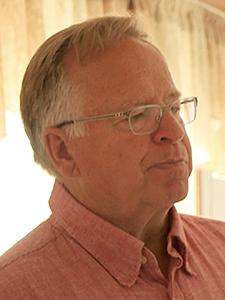 But as demographics have morphed the population of this part of the state — families are smaller and many young people have filtered out of rural counties in favor of the big city — that’s changed, he said.

Right now in Minnesota, there’s only about one available worker for every open job, and in places like Wright County, where Untiedt’s is located, a 3.7 percent unemployment rate means it’s hard to find workers willing to do the tough work required in agriculture.

That’s true in many parts of the state, said Bill Blazar, senior vice president of public affairs and business development for the Minnesota Chamber of Commerce, who said his group’s Grow Minnesota program visits around 800 companies across Minnesota each year.

“And 70 to 80 percent of them tell us that their number one concern is workforce, being fully staffed,” he said, adding that in addition to a fully functioning immigration system, Minnesota needs to find a way to tap underemployed populations, like refugees and ex-offenders, in order to fill needed jobs.

When it comes to farm work, it’s just not the type of jobs Minnesotans want to do anymore, especially in a job market like this, Untiedt said.

H-2A workers in Minnesota, 2011-2015
The number of H-2A workers companies applied to bring to Minnesota more than doubled between 2011 and 2015. This only includes approved applications.
Source: U.S. Department of Labor

“It’s not an issue of compensation, it’s an issue of mores and personal habits and exposure growing up,” he said — fewer and fewer are growing up with a farming background.

Employers are required by law to post publicly any jobs for which they are considering H-2A workers. And they’re required to hire any Americans who qualify.

“I had my first application in three years this year. The people aren’t out there,” he said.

About 15 years ago, Untiedt's began using the H-2A program. Now, the company is one of the biggest requesters of H-2A visa holders in the state, with about 80 H-2A employees this year.

Top H-2A employers in Minnesota, 2016
This chart shows the number of workers requested in Minnesota by the top 10 companies whose applications were approved. More than 100 companies requested to bring workers to Minnesota through the H-2A program in 2016.
Source: U.S. Department of Labor

Unlike other types of temporary foreign worker visas,  such as H-2Bs for nonagricultural workers and H-1Bs for high-skilled tech workers, there’s no cap on the number of H-2A workers the U.S. grants each year.

That doesn’t mean farmers have as many as they want. In parts of the country, farmers are hoping the Trump administration eliminates barriers to hiring H-2A workers: delays caused by paperwork, they say, and regulations make it difficult to get workers efficiently.

In Minnesota, perhaps the biggest barrier to using H-2A workers is the overtime requirements, Untiedt said. Minnesota is one of a few states that requires employers to pay H-2A workers overtime, in Minnesota’s case, time-and-a-half if they work more than 48 hours in a week.

His H-2A employees, who are used to working long weeks, want more hours, he said (workers MinnPost talked to agreed), but he can’t afford all the overtime.

Untiedt is the director of the Minnesota Growers Coalition, a group of about 30 farms advocating for a legislation to remove the overtime requirement. A bill that would have done so died in committee this legislative session, but the group hopes to pass it in the future.

Those opposed to such legislation say removing overtime protections would constitute taking advantage of the guest workers. 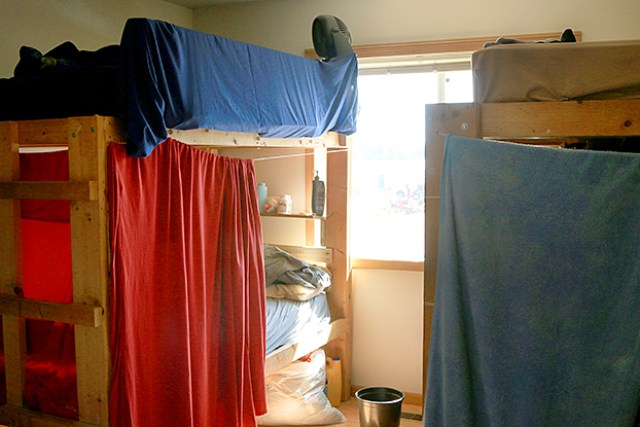 MinnPost photo by Greta Kaul
Employers are required by law to provide housing free of charge for H-2A workers.

“We have to be balanced and we have to consider the dignity of all people who are here in our state and who we want to be looked upon and respected,” Sen. Bobby Joe Champion, DFL-Minneapolis, told MinnPost in March.

But with the overtime rules, Untiedt says his farm is pretty much maxed out on the number of H-2A workers he can hire.

“When we figure our actual production costs, what it costs to have one of these workers here, they're somewhere between $18.50 and $19.50 an hour,” Untiedt said. That includes housing and transportation costs.

Still, the number of H-2A workers in the state is growing, mirroring national trends.

Gloria Bostic, a foreign labor certification coordinator for Minnesota’s Department of Employment and Economic Development, said the number of applications for H-2A workers is rising all the time. A few years ago, less than 60 employers applied, Department of Labor data show. In 2016, the number was over 100.

“I’m getting new H-2A employers all the time, every year. They kind of start talking to their neighbors — what’s the process, what's the cost, all that kind of stuff. Is it worth it? Is it cost-effective?” Bostic said.

The state’s biggest applicants for H-2A workers in 2016 were Bailey’s Nurseries, just southeast of the Twin Cities, Riverview LLP, near Morris, and Untiedt’s. Bailey’s did not respond to a request for comment and Riverview declined to comment for this story. 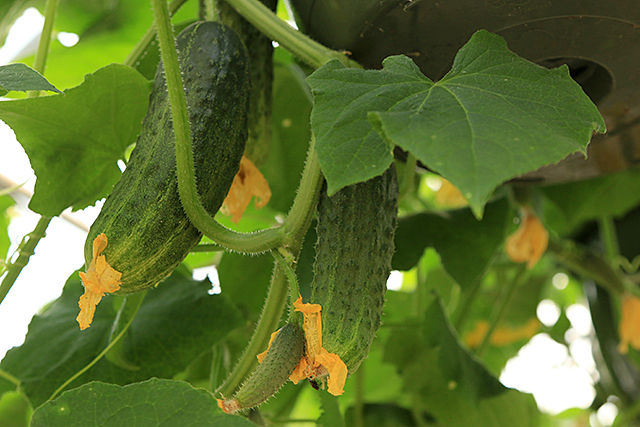 MinnPost photo by Greta Kaul
Between 2011 and 2015, the number of H-2A workers requested by Minnesota companies more than doubled, from 512 to 1,177. It’s a number that’s likely to grow as demographic change empties rural areas of Americans willing and able to do agricultural work.

If the state continues to have low employment and a scarcity of farm workers, Untiedt said demand for this program is likely to continue growing. There just aren’t a whole lot of other options.

“There is a tremendous scarcity of people, Minnesotans, local potential employees that would do this kind of work,” he said.