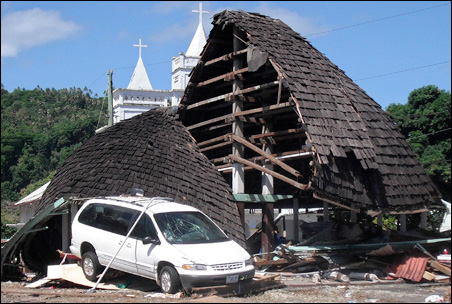 REUTERS/Raj Borsellino
A destroyed structure is seen among debris near a church following a series of tsunami waves on Tuesday that struck the village of Leone, American Samoa.

SYDNEY, AUSTRALIA — Sulili Dusi was jolted awake just before 7 a.m. local time today by a powerful earthquake that shook the walls of her house on Samoa’s main island, Upolu. She and her family ran outside to find the trees trembling, too, she told Radio New Zealand. They fled to higher ground before a series of tidal waves roared ashore. Other residents of Samoa, neighboring American Samoa, and Tonga were not so fortunate.

More than 100 people, including foreign tourists, are thought to have died in the South Pacific after the magnitude 8.3 offshore quake triggered a tsunami, sending walls of water crashing into nearby islands.

At least 30 are confirmed dead in American Samoa, where workers at a fish-canning factory in the capital, Pago Pago, say they had only three minutes’ warning before the devastating waves struck.

In Samoa, the independent nation formerly known as Western Samoa, survivors claim that they, too, received little or no warning. One woman, who gave her name only as Ngutu, told the Australian Broadcasting Corporation that after the earth stopped moving, “everyone was just walking around normal — curious about what was going to happen.”

Then, she said, a wave “tall as the sky” smashed into her little coastal village, Ulutogia. “Everyone just started running inland towards the hills, running for our lives.”

Yesterday, though, the waves were only six or seven minutes behind the quake, which sparked a Pacific-wide alert as far as Hawaii. “If things happen so quickly, there’s not a lot you can do,” says Peter Muller, the regional disaster response adviser to the United Nations’ Office for the Coordination of Humanitarian Affairs.

In American Samoa, as in Samoa, officials suspect that the death toll will rise. The headquarters of the National Park of American Samoa in Pago Pago were destroyed, according to Mike Reynolds, the park’s superintendent, who spoke to colleagues in California while sheltering under a coconut tree.

As the US prepared to dispatch emergency relief to American Samoa, Australia and New Zealand focused their aid efforts on Samoa, with several military planes standing by. At least two Australians, a New Zealander, and a Briton have died, while the nation of Tonga, to the south, has reported at least seven deaths. Across the Pacific, hundreds were injured and thousands made homeless.

Worst tsunami to hit Pacific islands in a decade
While yesterday’s scenes were dramatic – villages flattened, cars sucked out to sea, a boat washed up by the side of the road – the disaster was nowhere near the scale of the 2004 Indian Ocean tsunami, which killed more than 230,000 people. But it was the worst to hit the Pacific since a tidal wave claimed 3,000 lives in Papua New Guinea in 1998. In Java, Indonesia, in 2006, more than 300 people died in a tsunami.

On Wednesday, a magnitude 7.6 earthquake struck near the Indonesian city of Padang, causing severe damage, but no tsunami.

“Every disaster is different and throws up different logistical problems,” he says. “The key thing is for people at the local level to be prepared. That’s more important than the international response.”