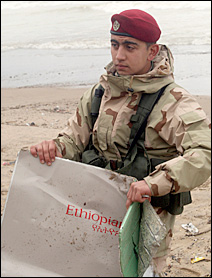 REUTERS/Sharif Karim
A Lebanese soldier carries a piece of wreckage at Khaldeh beach, south of Beirut.

BEIRUT, LEBANON — An Ethiopian Airlines plane carrying 90 people caught fire and crashed into the sea two minutes after taking off from Beirut early today. At least 34 bodies have been recovered.

The cause of the crash was not immediately known. Lebanon has seen stormy weather since Sunday night, with crackling thunder, lightning and rain, but experts say that weather alone is unlikely to be the cause.

Lebanese President Michel Suleiman said terrorism was not suspected in the crash of Flight 409, which was headed for the Ethiopian capital, Addis Ababa. “Sabotage is ruled out as of now,” he said.

The Boeing 737-800 took off around 2:30 a.m. (6:30 p.m. CST) and went down 2 miles (3.5 kilometers) off the coast, said Ghazi Aridi, the public works and transportation minister. The Lebanese army said in a statement the plane was on fire shortly after takeoff.

The wife of Denis Pietton, the French ambassador to Lebanon, was on the plane, according to the French embassy.

Helicopters and naval ships were scrambled for a rescue effort as huge waves slammed into the shore. Lebanese Prime Minister Saad Hariri announced a day of mourning and closed schools and government offices.

Ethiopian Airlines’ CEO Girma Wake told journalists in Addis Ababa that he had no information on the fate of those on board or about the cause of the crash. He said the aircraft had been serviced on Dec. 25 and passed inspection.

The Boeing 737 is considered one of the safest planes in airline service. The jet was first introduced in the 1960s, and today is the workhorse on many short- and medium-range routes.

Still, over the past 15 years it was involved in a series of incidents and crashes linked to a valve in the rudder assembly. This reportedly would malfunction and cause the rudder to turn independently of the pilot’s commands.

The problem was considered resolved after operators of older Boeing 737s were ordered to carry out inspections and upgrades of the critical rudder control systems.

Sidney Dekker, a professor of flight safety at the School of Aviation at Lund University in Sweden, said the rudder problem has been corrected by the manufacturer and that he’d be “hugely surprised” if it had anything to do with the crash.

Mr. Dekker, himself a 737 pilot, said that if reports of an engine fire proved to be correct, the accident could have possibly resulted from a loss of control at relatively low altitude.

He noted that the 737’s engines were overpowered in order to fulfill single-engine takeoff performance requirements. “This tends to produce a turning movement toward the dead engine in the case of the loss of a powerplant at takeoff,” he said.

Poor visibility in low cloud combined with high winds may have contributed to the problem faced by the pilots, he said.

Aviation safety analyst Chris Yates said it was far too early to say what caused the crash, but he noted that modern aircraft are built to withstand all but the foulest weather conditions.

“One wouldn’t have thought that a nasty squall in and of itself would be the prime cause of an accident like this,” said Yates, an analyst based in Manchester, England. He noted that reports of fire could suggest “some cataclysmic failure of one of the engines” or that something had been sucked into the engine, such as a bird or debris.

Ethiopian Airlines has long had a reputation for high-quality service compared to other African airlines, with two notable crashes in more than 20 years.

A hijacked Ethiopian Airlines jet crash-landed off the Comoros Islands in the Indian Ocean when it ran out of fuel in November 1996, killing 126 of the 175 people aboard. In September 1988, an Ethiopian Airlines jet crashed shortly after taking off when it ran into a flock of birds, killing 31 of the 104 people on board.
Boeing said it is coordinating with the U.S. National Transportation Safety Board to assist Lebanese authorities in the investigation.

By Elizabeth A. Kennedy