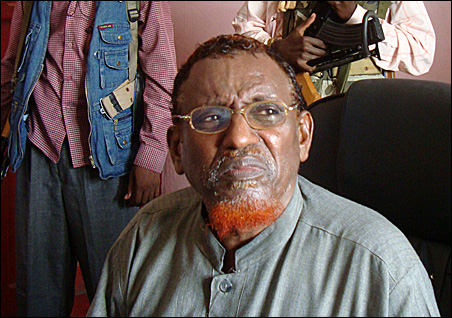 Somali pirates now ply their multimillion-dollar trade hundreds of miles out into the Indian Ocean.

Teams grab AK-47s and set out in skiffs and “mother ships” from all points on the war-torn country’s coastline.

Most come back exhausted and empty-handed, but those who capture a container ship, commercial fishing vessel, or even a supertanker usually bring the ship to one place: Haradhere.

In this main pirate hub – complete with its own piracy stock exchange – they wait for weeks, perhaps months, as negotiators hammer out a ransom payment for the ship, its goods, and the crew.

But business and life as residents know it in the laissez faire pirate haven may have just come to screeching halt.

Pirates fled the city in droves on Sunday as the hard-line Hizbul Islam group took over the port, raising pressing questions about what will happen to the piracy trade, whether strict and brutal sharia law will come crashing down on the city’s profiteers, and what will happen to the more than 300 foreign hostages currently held by pirates looking to cash in on ransom payments.

“We are in Haradhere now; we came here after we received a request from the local people to help them provide their security,” Hizbul Islam chief of operations Mohamed Abdi Aros told the BBC.

It’s unclear whether the militant Islamist group will allow pirates to operate while extorting a heavy “tax” or whether they will seek to gut the piracy trade in a bid to bring some semblance of law and order to the area.

When Islamists controlled Somalia in 2006, before US-backed troops from neighboring Ethiopia ousted them and occupied the country for nearly two years before the international community installed the weak transitional government that still ostensibly rules the country, they brought piracy and banditry to record lows.

“But I’m afraid this time around it might put the lives of the hostages in danger,” Andrew Mwangura, coordinator of the East African Seafarers’ Assistance Program in Mombasa, Kenya, told Reuters.