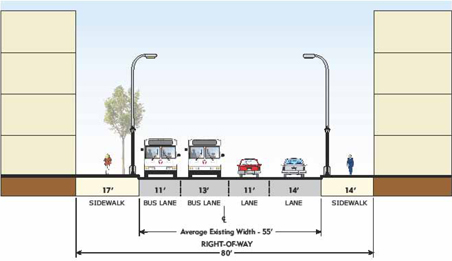 From an urban design standpoint it’s generally agreed that Minneapolis blew it when the Hiawatha light rail line was installed on Fifth Street through downtown. Landscaping and other street improvements were eliminated to save money, and all that was left was a nice train running down a barren street. To experience light rail downtown is a little like  eating a five-star dinner on paper plates.

The city vows not to make that mistake with its next big transit project, known as UPA. Most people don’t know it yet, but two of the city’s busiest streets — Marquette and Second avenues — will be totally torn up and closed for the next year and a half. Construction on the two-mile stretch of bus, auto and pedestrian improvements will start with baby steps next month, then accelerate big-time after the Republican National Convention ends in early September.

It will be a terrible mess.

But when it’s finished in December 2009, two dreary streets will have been transformed into places that are both functional and beautiful. At least that’s the city’s intent.

More than 200 trees will have been planted and dozens of flower beds added. Lower street lights will give sidewalks a cozier feel, and the walkways themselves will be wider and feature new bus waiting areas with electronic “scoreboards” that show real-time schedule information for all routes. The rutted asphalt pavement, mindful of some developing nations, will be replaced by smooth concrete. A new downtown-wide improvement district will be in place to ensure that streets and walkways are kept clean, trash cans emptied, plants actually watered and, in winter, snow removed from the curbs.

I know, I know. It sounds too good to be true. But that’s the plan.

Daunting challenge
From a construction-management standpoint, the project’s federally imposed deadlines, along with the complexity of rebuilding the streets to satisfy so many different users, imposes a challenge unlike anything the Public Works Department has faced.

But welcome to a new century. Increasingly, the city will be expected to transform its 1960s-era infrastructure, designed primarily for cars, into a multi-use model. Remaking downtown into a 24-hour city requires a new way of thinking that’s hard for many traffic engineers to grasp. This project, for example, isn’t primarily about repaving a busy street for cars. It’s also about accommodating buses, walking, waiting, shopping, the environment and natural beauty all in the space of 80 feet. It’s about building streets that people can live on, not just use during rush hour.

“There are many things in play,” Cerney said. One big item affecting the success of this project is passage of a downtown improvement district to ensure higher levels of maintenance and cleanliness on sidewalks. Adoption by businesses and the City Council is not yet certain.

The city has worked hard to distribute information about the project and solicit advice from citizens through a number of public meetings. Details are on its website. More details about national trends on retrofitting streets to multiple uses can be seen on the website of the National Complete Streets Coalition.

So, what is UPA?
Before going any further, we should explain UPA.

It’s the Urban Partnership Agreement grant awarded by the feds to five cities for the purpose of promoting transit, tolling, technology and telecommuting. The Twin Cities’ $133.3 million grant, augmented with state and local money, will be used primarily to add toll lanes for solo drivers on Interstate Highway 35W between Burnsville and downtown Minneapolis, and to install Bus Rapid Transit between the Dakota County suburbs and downtown, using both the 35W and Cedar Avenue corridors.

As part of the project, most downtown bus service will be concentrated on Marquette and Second avenues. Two exclusive bus lanes will replace the current single bus lane on each street. Buses will stop every other block to allow buses to pass one another. That process allows transit to move twice as many people three times faster.

Marquette and Second will be rebuilt totally, from wall to wall, although most underground utilities will not be moved. Construction of the streets will be done separately from construction on sidewalks so that landscaping and other sidewalk features can be carefully considered. And that’s where the hardest part comes.

The project provides for only minimal streetscape. How nice the sidewalks turn out will depend almost entirely on the assessments property owners are willing to pay. In other words, the property owners along the two streets will dictate the kind of pedestrian experience that downtown workers, residents and visitors will have. If the property owners believe that nice sidewalks will help their businesses and enhance their property values, then they will invest. If they decide otherwise, well, then Second and Marquette may more closely resemble the Fifth Street mistake made with Hiawatha.

Early indications are that hotels and condo buildings care a lot about having the kind of leafy, picturesque sidewalks that other cities have. Office towers, on the other hand, care much less, partly because of bottom-line corporate pressure, partly because high-level executives making the decisions park in underground ramps, walk in the skyways and seldom set foot on the city’s barren sidewalks.

It’s an unfortunate financial model. Highways are built for users. Sidewalks, as it turns out, are built for adjacent property owners.

Barbara McCann, director of the Complete Streets Coalition in Washington, D.C., said that giving property owners the authority to determine sidewalk design “has been seen as a barrier to true complete streets adoption” and that some communities have assumed more direct responsibility for their walking infrastructure, or even begun government-funded programs to retrofit sidewalks.

Even with the old model, however, Minneapolis seems optimistic that greener sidewalks can win out. “We can green it up pretty well,” said Bob Kost of Short Elliott Hendrickson Inc., the project’s landscape architect. He listed a number of prevailing themes that have emerged from meetings with residents and property owners, including: lighting, plantings, public art and street furniture that is high in quality and easy to maintain. Even with the problematic placement of underground utilities, there’s room for more than 200 trees, he said. But, he added, that if the sidewalks turn out badly, it will be because property owners didn’t want to pay.

“We’ll know more in September about the cost and how much we’ll be able to deliver,” Kost added. “We don’t want this to look like what happened on Fifth Street. They spent $700 million on light rail and left it on a blank street. That’s a sad story we don’t want to repeat.”