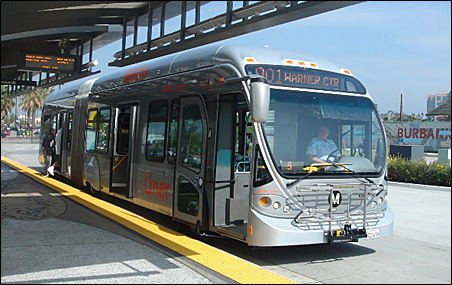 Train or bus? With federal and state governments facing fiscal meltdown and with transportation expecting some of the biggest hits, the question is frequently asked: Why not convert proposed LRT lines to BRT as a cost-saving measure?

The question is a good one, but the answer isn’t as clear as it seems.

First let’s define our terms. LRT is light rail transit, a mid-sized electrified rail technology that’s smaller than a subway but larger than a streetcar. The Hiawatha Line (opened in 2004) and the Central Line (under construction) are examples in Minneapolis-St. Paul.

BRT is bus rapid transit, a far more amorphous idea. At the high end, BRT is nearly identical to LRT except that its vehicles run on rubber tires on exclusive paved roadways and are powered by diesel fuel. Passenger amenities are similar: stations, ticket vending machines, raised platforms and 5- to 12-minute frequencies all day long. At the low end, BRT is just a glorified express bus system that runs mostly during rush hours. Locally, Metro Transit is developing BRT incrementally along Interstate Hwy. 35W between downtown Minneapolis and Lakeville, and along Cedar Avenue between Lakeville and the Mall of America.

Is BRT a bargain?
Now to the questions. Is BRT cheaper?

Generally, yes, but its cost advantage isn’t quite what it appears to be. Construction costs run one-third to one-half lower, depending on the sophistication of the BRT line. An upper-end BRT line costs $50 million per mile to build, for example, compared to $80 million per mile for a typical LRT line. But operating costs for BRT tend to run higher, especially on high-demand routes. That’s because it takes more drivers to haul the same number of passengers and because fuel costs for buses are higher and more volatile.

“The general consensus is that the more BRT tries to emulate LRT with higher levels of service and with better vehicles and stations, then you might as well have LRT, because the operating costs are less and because LRT tends to draw more riders,” said Nacho Diaz, a transportation consultant and former Met Council transportation director.

In other words, while initial costs are cheaper with BRT, you might get more bang for your buck with LRT, especially in a high-potential corridor and over longer periods of time.

Not only do trains draw more riders than buses (a new LRT line typically draws double the riders of a new BRT line), they lure more auto drivers to switch to transit. Transport analysts refer to the tendency as “rail bias” or the “coolness factor,” meaning that people simply prefer trains over buses.

LRT generates development
Another big LRT advantage is that it usually increases property values and it generates new jobs, new housing and new riders along its route. Results are, in some cases, dramatic. That gives LRT a big advantage in fairly dense corridors with high growth potential. BRT’s record in the United States is incomplete by comparison.

LRT may provide an environmental advantage as well, not only with its electric motors but with its ability to concentrate dense development in some areas while leaving others more pristine.

All in all, the LRT/BRT argument is something of a mismatch. In high-value corridors with lots of jobs and appealing opportunities for density and redevelopment, light rail makes sense. In less dense, more suburban-type corridors where there’s less all-day activity, BRT is probably a better choice.

“The main point here is that it’s the potential of the corridor that determines the mode,” said Hennepin County Commissioner Peter McLaughlin. “These are not five-year, short-term decisions to be made because of political expediency; they are decisions with time frames of 50 years or more.

Converting drivers to riders
“Another thing to remember is that we’re in the process of trying to rebuild transit’s reputation in this market,” McLaughlin continued. “It had devolved into a system that was just for ‘other people,’ you know, people who didn’t have other options. Now we’re expanding ridership to a broader audience and elevating the reputation.

“The other point is that we’re not neglecting BRT,” he said. “We’re building it, and we’re going to build more of it in corridors where it’s most appropriate.”

BRT’s advantages for secondary corridors are considerable. BRT provides more flexibility; buses can operate on exclusive lanes along major corridors, for example, then branch out to cover more territory as the destination approaches. That means a better chance at getting closer to where people live and work. BRT can also be phased in gradually, as with Metro Transit’s lines between downtown Minneapolis and the Dakota County suburbs. Politicians tend to like BRT because it allows them to spread transportation improvements more quickly to wider geographic areas at lower initial costs.

With cities clamoring for dwindling amounts of federal LRT money, some cities are giving BRT a closer look. The low-cost, high-use system in Curitiba, Brazil, [PDF] is often held up as a model. Los Angeles is investigating whether to give buses exclusive lanes along heavily-traveled Wilshire Boulevard, [PDF] thus copying the successful Orange Line BRT route running through the San Fernando Valley.

Ottawa considers rail conversion
BRT’s limitations are also on display, however. Ottawa, which launched its extensive system in 1986, is usually held up as the continent’s best BRT example. Busways there are credited with generating $1 billion (Canadian) of development over its first two decades of operation. But apparently the system has been victimized by its success. So many articulated buses crowd the downtown streets that the city is considering a conversion to higher-capacity light rail.

The capacity problem is one reason light rail was chosen for the Central Corridor. (Computer models showed buses bunching up at the University of Minnesota and failing to keep their schedules.)

“With ridership projected at more than 40,000 per day it wasn’t that hard a decision to choose light rail,” said McLaughlin, who chairs the Counties Transit Improvement Board. Light rail has also been selected for the Southwest Corridor (downtown Minneapolis to Eden Prairie) and may be the favored choice for the Bottineau Boulevard (downtown Minneapolis to Maple Grove) and Gateway (downtown St. Paul to Woodbury) corridors. Other corridors being studied (Rush, Red Rock, Robert Street) are likely to become busways, largely because their ridership projects don’t rise to LRT levels.

The fact that money is short right now changes the political dynamics for transit expansion. But it doesn’t change the 50-year potential for corridors in the MSP metro.

LRT or BRT? It depends on the potential of the corridor