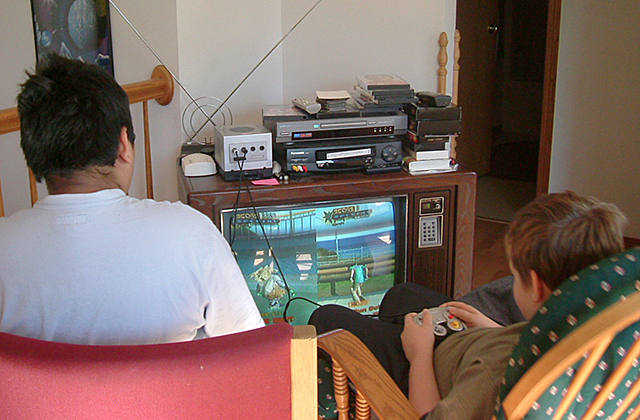 Creative Commons/Aine DA British survey out last week found that half of the adults polled had played outside at least seven times a week when growing up, while only 23 percent of their kids do that now.

Stroll down any residential street these summer days and you’ll find a curious absence — of children. Obviously, kids live in these places, but they no longer seem to play outdoors.

That’s a big switch from the ancient times when I grew up (by cracky). Back then, your mother practically locked you out of the house, so that she could mop and vacuum undisturbed. Even on the most brutal winter day, my mom dressed my sister and me in snowsuits and scarves and sent us out to savor the Arctic air and play with our similarly exiled friends.

And whatever the weather, we had fun. Across the street, one family had built a playhouse, and the neighborhood kids and I used it to fulfill our fantasies: one day it was the stage for a talent show; the next it became a grand hotel, the next a bunkhouse for cowboys and cowgirls. We formed rival “gangs” and built clubhouses out of planks and tin cans in empty lots. Every so often we conducted bicycle raids, stealing each other’s stashes of Malomar cookies. I assigned myself the job of spying on the Thomas Avenue gang for the Upton gang (and vice-versa), but in true journalistic fashion, I told every secret I heard to anybody who would listen. We also had non-parentally-approved adventures, going on “expeditions” to snoop on the hobo lady who lived down by the railroad tracks. We convinced each other that she was a witch because there was a broomstick sitting outside her door.

But there’s been a big change since then. A British survey out last week found that half of the adults polled had played outside at least seven times a week when growing up, while only 23 percent of their kids do that now. A study completed last year by the Seattle Children’s Research Institute appearing in the Archives of Pediatric & Adolescent Medicine found that nearly half of preschoolers in a sample representing four million U.S. children did not have even one parent-supervised outdoor play opportunity per day. A year earlier, the Alliance for Childhood, a nonprofit advocacy group, complained that,“Compared to the 1970s, children now spend 50 percent less time in unstructured outdoor activities. Children ages 10 to 16 now spend, on average, only 12.6 minutes per day in vigorous physical activity. Yet they spend an average of 10.4 waking hours each day relatively motionless.”

This is a sad turn of events, considering that every authoritative group — from the American Heart Association to the American Academy of Pediatrics — urges parents to send their kids outdoors to play — and to play freely, without adult-imposed structure.

Most of the benefits are pretty obvious: fresh air, more exercise (and a lower incidence of obesity), experiences playing and getting along with others and a sense of belonging to a community. And some studies have pinpointed less familiar pluses: According to an Australian group, children who spend more time in outdoor sports and less time watching TV have better retinal microvascular structure, which apparently indicates all kinds of things about one’s circulation in general. And Dutch researchers have found that kids with ADHD function better when in the woods than in a built environment. I don’t know whether the front yard is woodsy enough, but it’s certainly closer to nature than the basement rumpus room.

Beyond all that, it’s sad to think that kids no longer have the freedom we enjoyed — to catch butterflies, torture ants or pore over the grass looking for mythic four-leaf clovers.

So why have kids become homebodies?

It’s not as though they necessarily want to. Despite the lures of TV, video games and computers, 40 percent of the kids in the British study, which was commissioned by Playday, a group advocating outdoor activity, said they would like to play outside more often. Their parents simply didn’t allow it.

In fact, parents seem to be the problem. Fifty percent of them were concerned about traffic. Forty percent of the parents didn’t want their kids outside because of their fears about kidnapping by strangers. I know that as a parent, I was dogged by the same worries.

But just how nervous should parents be? A National Highway Traffic Safety Administration report  says that in 2011 (the latest year for which statistics are available) there were 61 million children aged 14 or under in the United States. Out of those multitudes, 230 lost their lives in pedestrian accidents that year. That’s about 0.00037 percent of the total. Another 11,000 children were merely injured — a rate of 0.01803 percent. I wouldn’t want to have put either of my children in danger, but those seem like pretty good odds.

The chances that a stranger will kidnap a child are pretty remote, too. The statistics — from 1999 — are woefully dated, but the general trend since then has been a drop in crime overall. Anyway, that year, according to the Crimes Against Children Research Center, there were an estimated 115 “stereotypical kidnappings.” They are the kind you see in TV dramas, but the official definitions is this: a stranger (or slight acquaintance) grabs a child, transports him more than 50 miles, detains him overnight and plans to keep or murder him.

Another 58,200 abductions were of lesser severity; they generally last for a few hours or overnight — though a child gone missing for even 10 minutes is a terrifying event. The greatest danger of kidnapping, however, comes from relatives; 203,900 children in 1999 were abducted by family members.

Sensational news stores about high-profile kidnappings by strangers may be what scares parents into keeping their kids close more than the actual facts. Allowing a child to play in his or in his friend’s back yard is probably much safer than sending him off for the weekend with his divorced (and possibly aggrieved) dad or mom.

In my childhood, parents and neighbors kept tabs on the kids when they were outdoors. (My grandfather’s bookkeeper — later turned embezzler —  who lived in our neighborhood, was the one who ratted me out for crossing a street in the middle of the block without looking both ways.) That’s no longer possible, however. These days, both parents are usually working full-time jobs, and so are their neighbors. There are very few eyes on the street during the day.

To be absolutely certain that the kids are safe, working parents confine kids to the house after school; or they enroll them in an endless series of supervised activities — team sports, dance classes, tuba lessons, drama and art classes, karate and swimming. For sure, some parents are hoping to produce trophy children. But I suspect that many ladle on the heavy scheduling to keep their kids supervised and out of harm’s way.

Suburban sprawl — if it’s sprawly enough — can also work against kids hanging out outside. When houses are spaced luxuriously far from each other, they have the effect of isolating children. Even when a mom or dad does say, “Go outside,” a kid in such neighborhoods looks around and sees no one.  Playing by yourself or with a brother or sister, even in the most magnificent backyard, isn’t a heck of a lot of fun.

I would have thought that the gated community, such as it is, might solve the problem. Kids would be free to wander within the presumed safety of its perimeter. But the Trayvon Martin-George Zimmerman case proves that such planned developments are far from secure.

Nostalgia, of course, has colored my perspective. For sure, back in the olden days of my youth, kids got run over by cars. They drowned. There were kidnappers and predators. And some neighbors had their eyes on the street too much — complaining  every time a child ran onto their lawns to catch a ball. But it seems as though we have lost something important for our kids. And it’s not clear how we can get it back.

Kids stay indoors: What happened to, ‘Go outside and play’?