When I moved back to the Twin Cities this summer I made a pilgrimage to the neighborhoods I frequented when I last lived here as a college student in the 1970s.

It was not a surprise to discover that many traces of the Minneapolis I knew then are gone.

The Mud Pie, the first vegetarian restaurant I ever encountered, is now The Bulldog. In the same block of Lyndale Avenue South, Treehouse Records now occupies the space where the iconic record store Oar Folkjokeopus opened in 1973.

Before Uptown was Uptown, South Lyndale and the residential streets surrounding it were the epicenter of our social lives. Most of my friends lived in big group houses along Bryant Avenue, Aldrich Avenue and Park Avenue.

I lived with my roommate on the second floor of a white house on 15th Avenue South, not far from Deaconess Hospital—which has since been erased from the landscape.

Larry Millett, an architectural critic and writer in St. Paul whose books chronicle the history and changing shape of the Twin Cities, says we all tend to idealize the places that were important in our lives.

“Cities are organic entities,” he says. “They grow and change inevitably.”

Many of the changes that have occurred during my absence have been positive, Millett says. Starting in the late 1970s in the Warehouse District, the historic preservation movement picked up steam and led to the rescue and reuse of beautiful old buildings.

More people moved to downtown Minneapolis and St. Paul, he says, and in the late 1970s and 1980s, both cities made big investments in improving their riverfronts.

Other changes are worrisome, Millett says. “Minneapolis has become a more divided landscape of rich and poor than it used to be,” he says. For example, the North Minneapolis area where he grew up has slipped into a troubling pattern of poverty and crime, he says.

“A neighborhood can tip quite quickly” from one personality into another because of disinvestment leading to declining property values, he says, while “some teeter on the edge for awhile.”

East Lake Street, where during college I worked the overnight shift at an Embers restaurant that’s no longer there, is showing signs of emerging from economic doldrums: A few restaurants and businesses have opened recently—a trend that can lead to more investment in the area.

I admit it’s partly nostalgia that makes me lament the changes in some of my college-era haunts. I remember Mama Rosa’s, a West Bank restaurant that served big plates of Italian food, as a destination for occasional splurges.

We rarely spent much time in downtown Minneapolis—shopping at Dayton’s was something this college student couldn’t afford—but when my parents came to visit I often suggested a visit to the Nankin Café, a grand place with balconies and more plentiful food. It closed in 1999 after 80 years in business.

I have fond memories of the Westgate Theater in Edina, too. The cult-favorite movie “Harold and Maude” played there nonstop for more than two years after the film’s debut in 1972. The theater, which was at 4500 France Ave. S., closed in 1977.

Some vestiges of my 1970s Minneapolis remain. The Electric Fetus is still around, though it moved from its original West Bank location to 4th Avenue and Franklin in 1972, and still has the same vaguely illicit scent of incense and vinyl that it did 40 years ago. The Black Forest Inn, which opened in 1965, is still around, too. 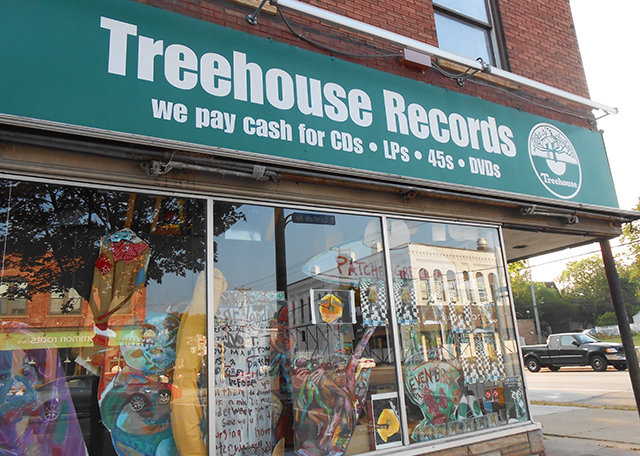 Some of the characteristics of Minneapolis that made me long for it when I lived in downtown Washington, D.C., and downtown Chicago are immutable.

The lakes are still sparkling surprises whenever I drive by one. From the air, the canopy of trees makes the city seem inviting and peaceful. There still are beautiful homes on big lots nestled next to retail and commercial neighborhoods.

The evolution of Minneapolis has given me new places to discover and explore. The arts district in Northeast Minneapolis is a place I’ll return to often. I don’t really know downtown well anymore, but I’m wandering its streets again.

When I returned, I was certain that my husband, Tom, and I would live in downtown Minneapolis. Although I had spent very little time in St. Paul, that’s where we ended up—on the edge of Lowertown and a couple blocks from the Mississippi River.

We moved to D.C.’s Penn Quarter just as it was blossoming into a center of dining and shopping in Washington and to Chicago’s South Michigan Avenue at the beginning of its transition from sleepy warehouse district to a hopping residential destination. We have the same urban pioneer feeling now in downtown St. Paul—the area feels like it’s on the cusp of exciting changes.

Whatever evolution lies ahead for the Twin Cities, I have a touchstone on the Minneapolis skyline that will never disappear: the Foshay Tower. My grandfather, Lisle Vickerman, was an ironworker who helped build the Art Deco masterpiece in 1929. Every time I glimpse it, I feel like I am home.

Rediscovering Minneapolis after decades away