Finally! Some good news about Block E, the half-block retail-and-entertainment complex on Hennepin Avenue. The project, built in 2001 to pep up downtown Minneapolis, has been languishing almost empty since the AMC movie theater shut down more than a year ago. So ostentatiously had this partly city-financed development flopped that some observers had advocated the nuclear option — and they weren’t talking about the Senate filibuster.

But Thanksgiving is almost upon us, and it looks as though we may have an extra blessing to count. On Monday morning, Camelot LLC, which purchased the troubled complex for an estimated $14 million in 2010, announced that it has inked a “tenant letter of intent” and begun lease discussions with the Minnesota Timberwolves and Lynx to transform the building into what the press release calls “a world-class training facility.” According to Phillip Jaffe, a Camelot partner (the other two are are Bob Alatus, a developer, and Irv Kessler, a hedge fund manager), two NBA basketball courts, locker rooms, players’ lounges and corporate offices will take up about a third of the complex, leaving the balance of the floor space available for restaurant, retail and office tenants.

The faux-charming 19th century-ish facade will also undergo a redo. RSP Architects, which has its offices at the Grain Belt Brew House in northeast Minneapolis, has been retained to renovate Block E’s innards and exterior. The style will be “Minnesota Modern.” I am not sure what that is, but supposedly it will be in keeping with other local architectural landmarks like the Guthrie and the renovation of the Millennium Hotel (which RSP did). Other projects in the firm’s portfolio: The Children’s Theatre and the Target Wing at the Minneapolis Institute of Arts. Given all that, I am expecting at least one endless bridge or flying buttress.

And better yet in this age of corporate handouts, the project will proceed without any public funds — just as private buildings are supposed to do. As you may recall, the city originally contributed a $39 million loan to the cost. Camelot says it still owes some $13 million to the public but plans to repay that by 2019, seven years ahead of schedule. To me that means that the company has been doing spectacularly well with the parking facility which was included with the Block E purchase.

The fact that anything is going into this building other than an abattoir or a used car dealership is a cause for some elation. “It’s exciting,” says Caren Dewar, executive director of Urban Land Institute Minnesota, a land-use and real-estate research organization. “I’m hopeful.” Last time I spoke to her about Block E, she had whispered over the phone, “Tear it down?”

Among the more prominent cheerleaders has to be Tom Hoch, president and chief executive officer of Hennepin Theatre Trust and the mover and shaker behind Plan-It Hennepin, a consortium of organizations hoping to transform Minneapolis’ main street into a “cultural district.” “It’s exciting to see something happen there,” he says. His office is across the street, he adds, and he’s looking forward to having a view of more than an empty building in the years before he retires. “But it’s all in the execution,” he adds.

Too true. Even with a possibly cushy lease from the Minnesota Timberwolves and Lynx, Block E has a ways to go before it becomes a raving success.

For starters, there’s the question of office space, about 100,000 to 120,000 square feet of it. Will there be takers in a neighborhood that hasn’t really ever been a home to corporate offices? Jaffe of Camelot concedes that there haven’t as yet been any nibbles because he and his partners have been working to finalize the deal with the basketball franchises. The floors will have to be turned into Class A or top-of-the-line business space; that will require installing more windows (because few corporate honchos want to preside over windowless cube farms) and possibly leveling out floors that sloped to accommodate movie seating. 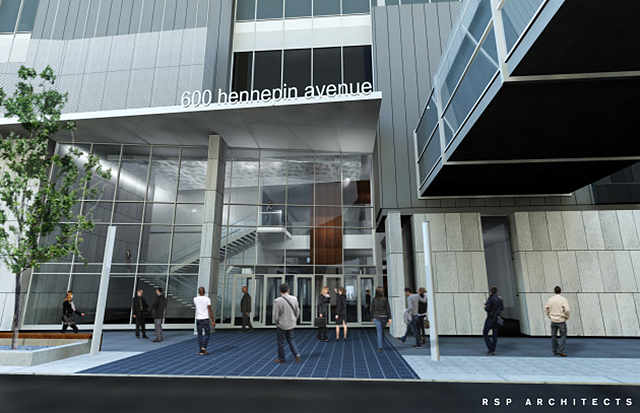 Second, the market for downtown office space is not currently hopping. According to a recent report on the Twin Cities from Collier International, “absorption” or usage of office space was relatively weak in the third quarter. Even though the economy was strong, employers were “densifying” —  i.e., allocating fewer square feet per staffer. What’s more, redevelopment of office space in older buildings, like 510 Marquette, the McGee Building (on Second Avenue South) and the Neiman Marcus store will compete with any new space developed at Block E.

Jaffe says that Camelot will also be on the hunt for restaurants — or maybe one restaurant. One reason Block E didn’t work in the past, he says, is that it offered pretty much what anybody could find in the suburbs. “What was the point of going downtown to Applebee’s when you could go to Applebee’s in Brooklyn Center?” he asks.

What Jaffe has in mind is “something unique that doesn’t yet exist in Minneapolis today” that will provide “an upscale family experience and add some vibrancy to the neighborhood.” The two main restaurants still thriving in Block E, Kieran’s and Shout! Piano Bar, both have shticks of a sort: the former Irish bands and weird sports (Minnesota Freeze Australian Rules Football) and the latter dueling rock pianists. There are no doubt plenty of possibilities, though the only one that came to mind was the Nyotaimori Restaurants in Japan, which allow diners to eat sushi off the bodies of nude servers. I’m pretty sure there’s nothing like that in Brooklyn Center.

Retail will be another tricky piece to handle. Jim McComb, a real estate and retail consultant, points out that “The building has some strange features.” There was no easy way for pedestrians (or shoppers) to get from Hennepin to First Avenue. They had to go up to the second level and then down to the first to exit. Designers, he adds, wanted to put an escalator on the west side of the building to allow people out to the street but the city vetoed that. “The circulation never worked well,” he says.

Jaffe promises that the architects’ plans will change all that. “Ten to twelve thousand people a day pass through the building and the skyways.” There are bound to be retail outlets that can sell something to them. The first floor, as I see it, is more problematic. Block E, which has only a couple of entrances, is far from inviting.

Sam Newberg, an urbanist and founder of Joe Urban, Inc., a market research company, says he hopes “more ground level windows and doors are added. If they aren’t, it will be hard to call it an improvement.” He advocates going small. “Jimmy Johns and Starbucks have been there all along, on the ground floor. A few more tenants like that – small stores like Jamba Juice or whatever, even continued use as art galleries, are most of the answer.”

Right now, the architects’ renderings make the building look pretty bland and corporate — if at least modern and clean. But Jaffe is hoping to add some pizzazz. Block E sits in what he calls “the billboard district” so he’s not averse to adding lights, advertising and creative signage to the building to give it a kind of Times Square feel. Tom Hoch says that the developer has already agreed to meet with his Cultural District Alliance, which includes representatives from the Walker Art Center, the Twins and Artspace, to talk about the design. Let’s hope that the outcome is at least a little rakish to capture some of the spirit of the bars and pool halls that once flourished on the block.

Of course, the building will only work if people use it. The best way to insure that  — in my not-so-humble opinion — is to make the Timberwolves/Lynx practice facility a destination. If, for example, the teams offer a small bleachers section where the public could watch team practices (for the price of a ticket), families would have a reason to visit. Maybe, when the teams aren’t practicing, local high school or college teams could use the courts for some of their games. Once people are in the building, well, they’ve got to eat, so they’ll patronize the restaurants with or without gimmicks. And maybe they’ll do a little shopping, say, buy a team T-shirt or a ball cap or a book about basketball.

Whatever they do, you’ve got to hope that Camelot’s partners succeed in retailizing what has become a void right in the middle of the city’s main drag. Says Jim McComb: “I wish them well with that very difficult building.”