It barely matters what the idea is — a new transit line, a baseball field, a hospital, an apartment complex, a widened road or expanded sewer system. Many of us, like terrible 2-year-olds, react with a petulant “no.”

But that resistance is often overwhelmed by the sweet yoo-hoo of the economic-impact study. Generally, one comes with each new proposal for civic improvement. Almost invariably, it predicts that the new project, whatever it is, will produce goodies beyond compare — jobs in the hundreds or thousands, spending in the millions, higher real-estate values and plushy tax revenues. Impressed, we say, “OK, let’s do it.”

Perhaps, however, we should, like Odysseus, who had sailors bind him to the mast of his ship to avoid being lured to doom by the Sirens, resist the “sweet enchantment” of those economic projections, take them with a pinch of salt or at least try to understand what they mean. (Sorry, I have been into the Homeric epic since viewing Charlie Bethel’s hilarious retelling of “The Odyssey” at the Open Eye Theatre over the weekend.)

If we don’t, maybe not doom, but disappointment will rise up to meet us.

Take, for example, a new report  from Donjek and Anton Economics, a St. Paul consulting firm, charged by Minneapolis with measuring the economic impact of a $50 million renovation of Nicollet Mall in downtown Minneapolis. The design, which was created by James Corner Field Operations, one of the architects of the acclaimed Highline park in New York, would, among other things, spruce up the pavement, the lighting and the landscaping, add stairways that would allow people in the skyways to descend to the sidewalks and create a “Mississippi Woods”-style park to the north. Private and public sources are supposed to split the cost — although Gov. Mark Dayton has called for only $20 million in bonding, which amounts to 40 percent.

No serious overhaul since it was built

Although the plan isn’t perfect in my opinion (buildings on Nicollet definitely need more doors, and maybe there could be elevators up to some of the skyways), renovating the mall makes sense. Minneapolis is the state’s leading city, and Nicollet is its major avenue. The mall hasn’t had a serious overhaul since it was built in 1968. Back then, Formica countertops and avocado green appliances graced the average kitchen. Without a fix-up our mall is in danger of becoming the style equivalent thereof.

Jon Commers, Donjek’s principal (he also represents District 14 in St. Paul on the Metropolitan Council), says that Minneapolis did not pressure the firm to produce any particular verdict. But the study’s economic outcomes look very sunny. A modernized Nicollet mall, says the 16-page report, would generate $105 million in new spending and 860 full-time-equivalent jobs downtown.

But when you take a closer look, the numbers aren’t quite as buoyant. Those 860 full-time equivalent jobs would mostly involve the folks charged with designing, building and installing the mall upgrades. Their jobs would pretty much disappear when the project is complete.

“We did not project the number of long-term jobs that might be created,” says Commers. The report mentions another 1,900 new jobs, but those are coming from other construction already under way in the area. 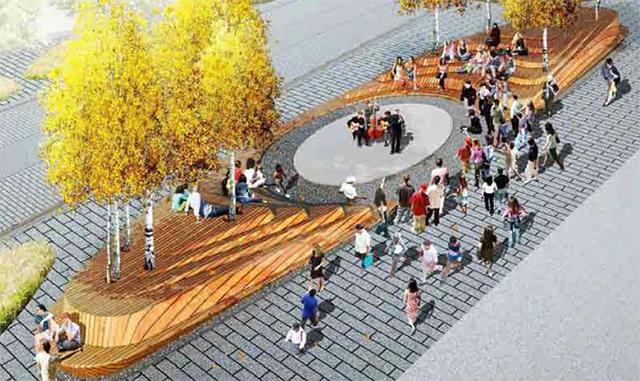 James Corner Field Operations Team
Rendering of proposed theater in the round area of Nicollet Mall.

Similarly, the $105 million is simply the multiplier effect of the $50 million in hard cash that is to be spent on the refurbishing. In case you’re a little rusty on the multiplier effect, it consists of three components: direct impact — that is the expenditure of the original $50 million; indirect effect — the amount of dollars recirculating as a result of the original expenditure; and induced impact — the spending that occurs when employees, business owners and others spend money they earned. Nobody should mistake that for sustained economic improvement. That would only occur if the renovated mall draws more visitors, shoppers and tourists — and there’s no real way to predict that.

The introduction of an amenity, like a park, or in this case, its renovation, usually boosts real-estate values. Using comparables, Donjek and Anton estimated that property values on the mall would rise by $57 million, generating an additional $10.9 million in revenues for local government and $2.1 million for the state — which is not a windfall and not long term but not nothing either. Commers adds that they assiduously avoided the overblown and thus hard-to-believe conclusions of the usual impact study on purpose.

“We wanted an emphatically conservative estimate,” he says. Fair enough.

Typically, however, impact studies suggest such grossly bloated numbers that John L. Compton, distinguished professor in the Department of Recreation, Park and Tourism Sciences as Texas A & M University, subtitled his paper about them “Instruments for Political Shenanigans?” He noted, “Because the motivation undergirding them usually is to prove the legitimacy of the sponsor’s economic case, the temptation to engage in mischievous practices is substantial.”

And so it goes with projections about the economic might of the Super Bowl, which Minnesota is now trying to win for 2018. According to Gov. Dayton, a booster of the project, the game should plump up local purses by some $500 million. Where he’s getting that number is anybody’s guess; his source could be the NFL, which does its own sunshiny estimates but keeps the studies behind the number-crunching secret.

Or he could be loosely basing that number on a post-game economic study [PDF] performed for Indianapolis after it hosted the Super Bowl in its brand-new stadium in 2012. That study concluded that the big game’s gross contribution to the local economy was $384 million.

I suppose if you add in some inflation and a little optimism, you can come up with the governor’s $500 million. Tax revenues going to local government came to about $40 million, which is the number that the more restrained Michele Kelm-Helgen, chair of the Minnesota Sports Facilities Authority, estimates that we would take in for hosting the game.

But there are offsets to these glowy figures. As Crompton points out, expenditures by people who already live here shouldn’t really count. Those dollars are already circulating within the Twin Cities, and if they aren’t spent on the Super Bowl, they’d likely be spent on something else. Second, there will be costs to hosting the event: increased policing, garbage pick-up, traffic congestion and disruption. Those offsets are never calculated by enthusiastic hosting committees — at least, I’ve never seen them added up. 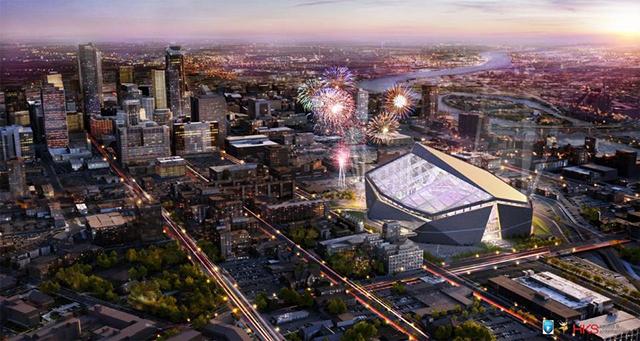 Minnesota Vikings
According to Gov. Dayton, a booster of the project, a Super Bowl should plump up local purses by some $500 million.

What’s more, to qualify as host city, the NFL requires the local area to provide a batch of tax exemptions — on game tickets, Super Bowl-related events and the game-day salaries of NFL players, officials and staff. New Orleans allowed the NFL tax freebies on hotel rooms and meals, costing it $800,000 in revenues when it hosted in 2013. (And, of course, there’s the cost of the billion-plus new stadium, which the NFL also seems to require these days for its host cities.)

More discouraging is the fact that much of the revenue generated by the Super Bowl does not stay local. As Victor Matheson, a professor of economics at College of the Holy Cross in Worcester, Mass., noted in a 2004 paper on so-called mega-events, “Expenditures in industries dominated by nationally-owned chains such as large hotels, rental car agencies, and airlines, and to a lesser extent motels, restaurants, and general retailers may rise significantly due to a mega-event, but local incomes will not increase substantially.” And the Vikings and the NFL will haul a good deal of the money from sales of tickets and jerseys, knick-knacks and bobble heads back to New York and New Jersey.

Minneapolis and the siren song of economic impact