The push-me-pull-you between Minneapolis and St. Louis Park over the simultaneous running of freight trains and the proposed light-rail line through the Kenilworth Corridor has sucked up so much time, money and attention that there’s almost none left over to go around to other places. Like Minnetonka.

To go forward, the Southwest LRT, which is slated to travel from downtown Minneapolis to Eden Prairie, must win the consent of all the municipalities along its right of way. So far, only St. Louis Park has held hearings, and citizens testified that the city should approve but with a proviso that there absolutely be no rerouting of a freight train, now in Minneapolis, through their community.

Meanwhile, Minneapolis Mayor Betsy Hodges claimed that the Met Council’s plan to keep the freight train in the scenic Kenilworth Corridor and dig a $160 million tunnel to accommodate the LRT was a “fundamental failure of fairness” and voted “no.” The city and the Metropolitan Council are now working with a mediator to resolve their differences.

To complicate matters further, the Minneapolis Park and Recreation Board passed a resolution saying that it would not approve the tunnel under the Kenilworth Corridor unless there was further study. Section 4(f) of the Federal Transportation Act forbids money being dispersed on any project that affects parks or historic sites unless there is “no feasible and prudent avoidance alternative.” The board urged the Met Council to undertake design and engineering studies right away “to determine the feasibility and prudence of a tunnel underneath the Kenilworth Chanel” (that’s their spello, not mine) — even though, by now, the piles of studies completed over the years have probably decimated enough trees to populate an entire new park.

Meanwhile, Minnetonka looks set to approve the line. But in a hearing before its City Council Monday night, it became clear that the route will create problems there, too. One issue: the train line will pass close by the Claremont Apartments, a five-building 318-unit “luxury” development on Smetana Road. According to Jerry Kavan, project manager for the complex, the route will run only 89 to 120 feet away from the bedrooms and living rooms of residents, depending on the unit. (That’s about a third of a football field.) A City of Minnetonka nature trail borders the property, but the train line will level out Opus Hill next to it and rip out trees that now mask an industrial building. A retaining wall will shore up the remains of the hill. The nature trail will remain, but there won’t be much nature left, at least not right there. 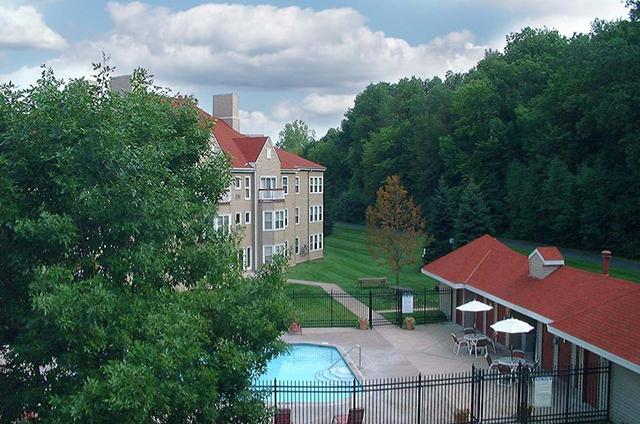 I explored the place Monday, and the setting was lovely. I don’t know exactly how luxurious the complex is; units rent for between about $860 and $1,700, which seems pretty reasonable, but Kavan says that the owner, Slosberg Co., a large development company based in Omaha (known locally as Richdale Management), bought the now 30-year-old property in 2005 and poured millions into updating the apartments, adding alarms, improving elevators, installing washers and dryers in all the units and building a fitness center for tenants. (The Minnetonka Assessing Division says that the company paid $26.4 million for the complex and has its current worth at $41.3 million.) 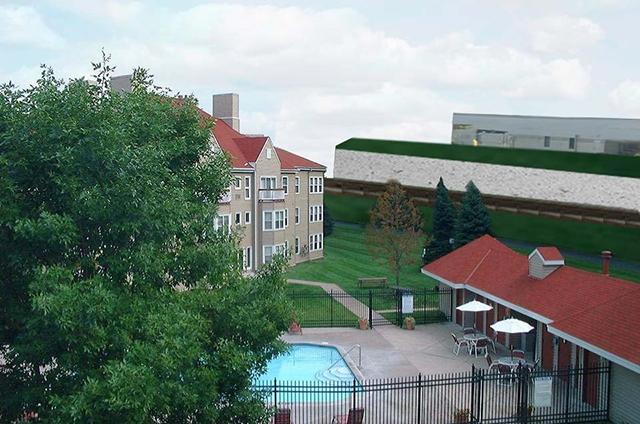 Slosberg, which owns and manages 12,000 apartment units nationwide, was aware of plans for the LRT from the get-go, but the route, taking the train right past its property, wasn’t settled until 2011. “Then our world fell apart,” testified Kavan.

The uglification of the immediate area has a hard dollar effect as well. Currently, says Kavan, renters on the scenic side of the buildings pay $25 a month more for their views. “We’ll probably have to rent those units at a discount to get people to take them,” said Kavan. And, acoustical engineers advised the company that to diminish the train’s noise, it would have to install triple-pane windows at a cost of about $800,000. “But they won’t do anything about the train’s vibration,” says Kavan.

Accordingly, like others before it Richdale hired its own engineering consultant to find another route. Vern Swing, traffic engineering manager for Westwood, a consulting company, told the City Council that — no surprise — he had indeed found one. A map shows it veering to the north of the Claremont Apartments. And although it would travel through a wetland, another sensitive environment, the train would ride on elevated piers so damage to the environment would be minimal, and commuters would be able to enjoy, at least momentarily, a stunning landscape.

That all sounded very sensible, and when I talked to Met Council engineer Jim Alexander, he said that the SWLRT project office would consider the change — although he said that in the way I tell phone callers asking for charitable donations that I might give next year. And Minnetonka Mayor Terry Schneider tossed some cold water on the idea. Rerouting the train would require consideration of all kinds of factors, including the safety of the route, travel time, covenants on the wetlands and about 30 other issues, all of which had been studied previously.

On top of all that, Lynn Miller, a resident of the nearby Opus condominium development, asked why, after attending years of meetings on the LRT, she was only hearing about this route now. She and her fellow condo owners at Opus would need time, presumably oodles of it, to study a route that might take the train near them.

Although Kavan said he would not ask the City Council to vote down the LRT, he did bring a lawyer to the hearing. William Griffith, at least in my opinion, laid out a case with a legal threat as subtext. Like the Minneapolis park board, he claimed that under Section 4(f), the Met Council would have to consider alternate routes before plowing its train through Opus Hill. And, after researching all the electronic files of the Met Council’s deliberations, he could find no evidence that it had looked at another route.

Will Slosberg sue? I don’t know if it has standing to do so, and a lawsuit might well cost more than installing $800,000 worth of windows and taking a hit on its rental income. And the company could agitate for Minnetonka or the Met Council to do something to mitigate the loss of its scenery.

OK, so that’s Issue One. The second, to me, is even more salient. The three Minnetonka stations, as designated, do not serve the most populous areas of the town. The amount of affordable housing within walking distance of the City West, Opus and Shady Oak stations is minimal. And if you look at the maps, you’ll see that while such housing is within a quarter or half-mile radius, the actual paths to walk to stations are pretty lengthy, more like a mile-and-a-half. The Met Council could maintain that the train takes people to employment centers, but the large campuses of suburban office buildings put many of them at quite a distance from the stations as well. Employees commuting by LRT will have to catch city buses or employers will have to provide shuttles.

These observations came from Stuart Nolan, CEO and founder of Stuart Company, a large housing developer and owner of three apartment complexes (comprised of 500 units) in the area. He asked the council to support construction of a pedestrian station near Smetana Road, in fact, almost in front of the Claremont apartments. Nearly 7,000 people live nearby. “It is the largest concentration of affordable housing in Minnetonka,” he told the City Council. “These people want to be included.”

And he’s right. Smetana appears to be the epicenter of a huge expanse of apartment developments, whose residents are probably more apt than owners of single-family houses to ride the rails.

Mayor Schneider remarked that time was late for the Met Council to consider an extra $20 million station — although what’s $20 million when the whole shebang is estimated to cost about $1.68 billion? In any case, he and council members talked about putting language into their consent that would ask the Met Council to build the line in a way that would allow for the addition of a Smetana station later.

If, however, the train is inconvenient to local passengers, it will lack riders. In that case, later might become never.