It’s a bit jarring to walk around University of Minnesota campus these days. Huge new apartment buildings are popping up like gophers out of their holes. For example, the Marshall is a new apartment building that can house almost 1,300 students in Dinkytown. (It even has a Target on the first floor.) Likewise, Washington Avenue in Stadium Village is now lined with five- and six-story buildings. Even Sally’s, the famous sports bar with an overly attractive rodent mascot, has had to move into a new building.

Many of these new apartment buildings offer amenities like granite countertops or community rooms that might seem odd to people who remember the spartan housing of their college years. But they’re part of a trend toward newer high-end “luxury” student housing that is indeed a far cry from the “Animal House” image of students living in squalor. For many students, the rise of these new apartments is a long-awaited sign of progress.

One of the premises surrounding the new construction is that student demand for housing near campus is increasing because, increasingly, students prefer living within walking distance to campus. For example, when justifying some of his project proposals, developer Kelly Doran was fond of saying that the number of noncommuting students attending the university has increased from 25 percent to 60 percent. Those kinds of trends, along with the new Green Line light-rail line, threaten to shift the housing dynamics for the large school, and might make the school’s many parking ramps less profitable.

Chris Iverson, who graduates from the University of Minnesota this semester, was one of the people curious about how these new five- and six-story buildings would impact neighborhoods around the U. For his senior urban studies project, which he recently posted to streets.mn, Iverson studied how the construction of the new buildings around campus affected the traditional student housing market, duplex and older, smaller apartment buildings concentrated in the neighborhoods surrounding the campus. Compared to private homes, it’s difficult to find data on rental properties, so Iverson combed through online rental listings and compared them over time. He found that the recent apartment construction might have lowered prices for students living in more traditional duplex-style homes.

“People against these kinds of projects claim that luxury housing units are only for rich students and their well-off parents, and removes affordable housing around university area,” Iverson told me. “But there’s an interesting supply and demand system, where sucking up students from older units into high-amenity living makes older housing options less desirable.”

According to Iverson, rental properties that have traditionally been seen as “cash cows” for university-area landlords might be less valuable, and forced to compete with the new buildings.

Meanwhile, just down the river in St. Paul, the University of St. Thomas and St. Paul are struggling to figure out the best way to build student housing. As St. Thomas has shifted its St. Paul campus to focus more on undergraduate students, neighbors in the area have become concerned about the increase in the density of student houses. Common complaints include late-night noise and occasional vandalism due to student parties.

“It’s been highly contested and contentious,” Josh Capristant told me. He serves on the West Summit Neighborhood Advisory Committee, a group intended to calm tensions around the school. “For years here there’s been no ground broken on any of that housing [along Grand Avenue]. I’m an architect and do some planning, and I’d like it to be denser. But the big problem is that the university only has 40 percent of its students living on campus.”

In hopes of spurring denser apartment development along Grand, St. Paul recently re-zoned the area to increase the potential for density around intersections.

Russ Stark is the City Council member in the area, and has been trying to balance the concerns of neighbors with the institutional needs of the school.

“There’s been a supply problem one way or the other,” Stark explained to me this week. “And the market’s been taking advantage of that. There’s this push and pull. Our interest in the city is to push more toward apartment buildings, as opposed to using the single family homes. But part of the solution is for UST to build more housing on campus as well.”

Neighbors are hopeful that apartments can be built somewhere, on- or off-campus, which would ease some of the tensions around the conversion of single-family homes into student living spaces. 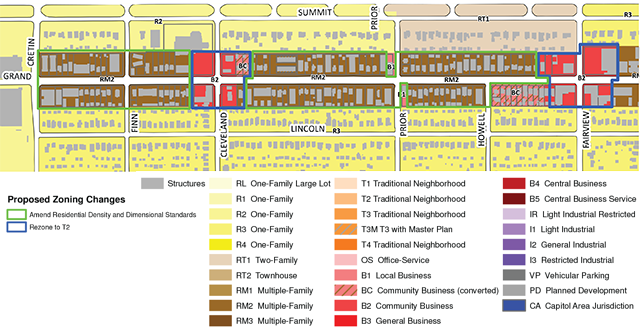 Maybe “luxury student housing” seems like a paradox whose time has come. Years ago, St. Paul instituted a zoning ordinance that limits the number of “student houses” that can be built on any given block, in an attempt to prevent the neighborhood from becoming a student ghetto. While one of the concerns was that the ordinance would limit supply and drive up prices for cash-strapped students, according to Stark that hasn’t happened.

In many ways, a university campus seems like an urbanist dream, filled with walking, density and street life. But because college students are different from many other people in the city — they’re often active late at night, are willing to live at higher densities, and are full of desire for new social experiences — these differences inevitably cause tension. Iverson’s research, which looked at four different Big-10 college towns, reveals that the Twin Cities’ student housing shifts are part of a much larger trend toward newer and nicer apartments.

At this point, it remains to be seen whether the housing trend is sustainable. Many of the new buildings around the University of Minnesota are having trouble filling up. One thing is for sure: Student neighborhoods aren’t like the rest of the city. Restrictions on rental housing and the boom in new construction means students will have more housing choices in the future. “Student ghetto” neighborhoods, full of dilapidated homes and couches placed on curbs, might just become a thing of the past.