You probably don’t notice them, but they’re all around you. Utility boxes sit on street corners and sidewalks, holding all the valuable equipment that keeps our city clicking along: traffic-light control mechanisms, cable and phone connections, streetlight equipment, heat equipment for bus shelters, flood-control pumps, light-rail switches, electric transformers, and some things that I’m sure I don’t know about. Some utility boxes are owned by the city, others by Metro Transit, Xcel Energy, or Comcast and CenturyLink; but no matter the owner, there are thousands of them scattered through the city, sitting like frozen droids, the ultimate mysterious infrastructure.

But in a few neighborhoods, these mundane boxes have flowered into some of the best showcases for public art, bringing community together in often surprising ways.

The dynamics of graffiti prevention

Apart from the nomadic maintenance crews, the only people paying much attention to utility boxes have long been the taggers. These boxes quickly attract gang graffiti that traces its cryptic circuits through the city. Because graffiti is attracted to flat, blank surfaces like garages or unbroken building walls, with their dark slate surfaces, utility boxes are perfect tag magnets. But it doesn’t have to be that way. 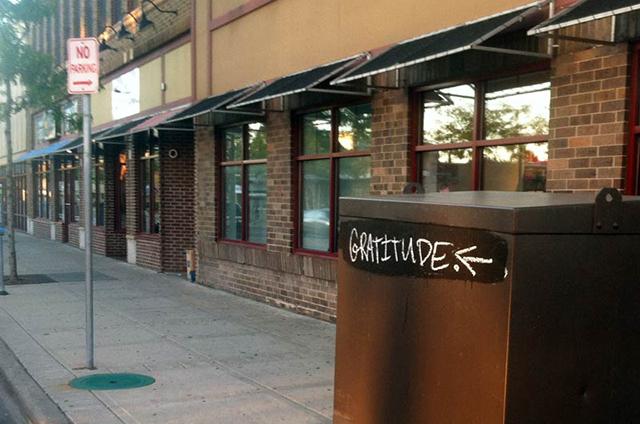 “Knock on wood, graffiti has really died away,” Eric Gustafson told me. Gustafson is the executive director of Minneapolis’ Corcoran Neighborhood. “We’re down a lot from five years ago, when graffiti was a very hot topic. Our response was to get a graffiti prevention grant from the Arts Council, and we spent a small portion of that on these utility boxes.”

Compared to other public art programs like murals or youth engagement aimed at reducing graffiti, Gustafson believes that utility box art is one of the most efficient ways to control vandalism. Plus, if well curated, the streetscape can come to life with new public art on an otherwise invisible canvas. 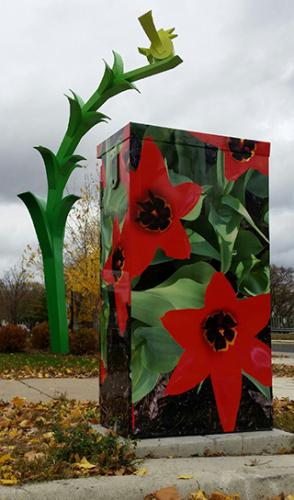 Courtesy of the City of Minneapolis
Nicollet Avenue, Thinking out of the Box, Kingfield
Neighborhood

“There’s something about the box form that makes people approach it in a very creative way,” Mary Altman, a public arts administrator in Minneapolis’ Community Planning and Economic Development department, told me. “Some of the first wrapped boxes were in the Kingfield neighborhood. The boxes that really caught people’s attention were close-ups of an orange flower and a purple onion. The colors just popped!”

According to Altman, magnified photos make some of the best art for this purpose; blown up and placed on boxes, they reveal details of things that you wouldn’t normally notice. For example, one of Kingfield Neighborhood Association Executive Director Sarah Linnes-Robinson’s favorite wraps is simply a giant close-up of tennis balls, an ode to a recently deceased neighborhood regular from the nearby Martin Luther King Jr. tennis courts.

The change in the utility-box art business came when what Mary Altman calls the “vinyl wrap boom” took place. Altman spends much of her day answering neighborhood calls about utility boxes, and the new vinyl technology — the same as is used on giant bus advertisements — has made her life easier.

“We now have the ability to ply an adhesive vinyl to just about anything out there in the world,” Altman told me. “We can and reproduce any electronic image, any fun and interesting artistic designs, onto the wrap itself. Now it can be not just painted, but many more artistic mediums can be transferred: photos, prints, collages.” 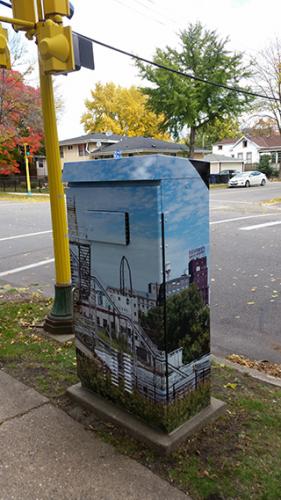 With the new technology, neighborhoods like Kingfield require box wraps to be site-specific, somehow related to the place where there located. For example, in the Lyndale neighborhood, artist Carly Schmitt took photos of people’s living room curio cabinets and transformed nearby utility boxes to connect domestic and public space.

One of the big questions about the technology is how long each art technology might last. In theory, vinyl wraps have a five-year lifespan, but as Altman explained, Minneapolis is just starting to find out how long they’ll endure through the harsh seasonal extremes. The Kingfield neighborhood, which has the earliest vinyl wrapped boxes in the city, has inspected their 5-year-old boxes and found that they’ve held up well.

“Of the 10 boxes, there were only two where the wrap was in bad shape,” Mary Altman told me. “Once the wrap starts to peel, the adhesive can fail when it gets really cold and it starts to chip off. We don’t know for sure how long it will really last.”

For the record, painted boxes seem to age well, too; the three boxes that were part of the initial public art project in the Corcoran neighborhood are all holding up just fine.

Like most things in a bureaucratic city, the process for getting official approval for a box wrap can be daunting. 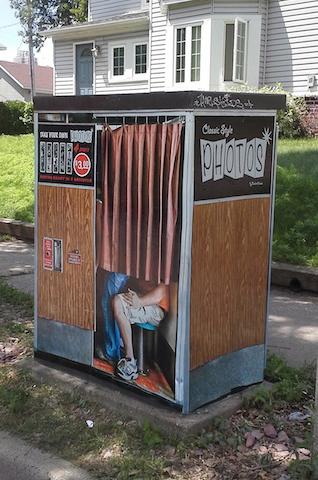 The first catch is finding funding. As Gustafson explained to me, the graffiti prevention grants that once funded Minneapolis’ first wave of utility-box art have gone away. Today, most of the funding comes from neighborhood improvement or public art dollars, which can be threatened during tight budget cycles. Then the utility-box project has to be OK’d with the city’s public works department (in case a box is scheduled for replacement), and taken through another round of approval with the city’s public arts board. Finally, neighborhoods need an encroachment permit for building a project on the sidewalk.

“The city process has become increasingly cumbersome,” Linnes-Robinson told me. “Why does the city make things so complicated? I had to completely rewrite our proposal to go to the Arts Commission, even though we were approved from our solid waste and recycling grant. Then I had to go back and get permission from adjoining property owners for permission even to wrap the box. The process is so intimidating.”

The Corcoran neighborhood, on the other hand, Gustafson has had more experience with public arts projects, and didn’t find the process to be overly difficult. And to help facilitate the public art learning curve, the city has made available a dozen pre-approved utility box images that streamline the approval process.

The public-space utility of utility boxes is an unexpected urban dynamic. What first appears to be the epitome of boring infrastructural blight, when given a little bit of artistic love, can become one of the small ways that people begin to make meaning in their neighborhood.

“Of course these images are to prevent graffiti,” Kingfield’s Linnes-Robinson told me. ”We’ve proven that they do that. But they’re also to get people to stop and look at things more closely. What else could they see that could be different?”

Once you see what they’ve done in neighborhoods like Lyndale, Corcoran, and Kingfield, the potential of utility boxes grows on you like wildflowers. I’ll bet that once you start noticing the utility boxes, you’ll start seeing them everywhere. 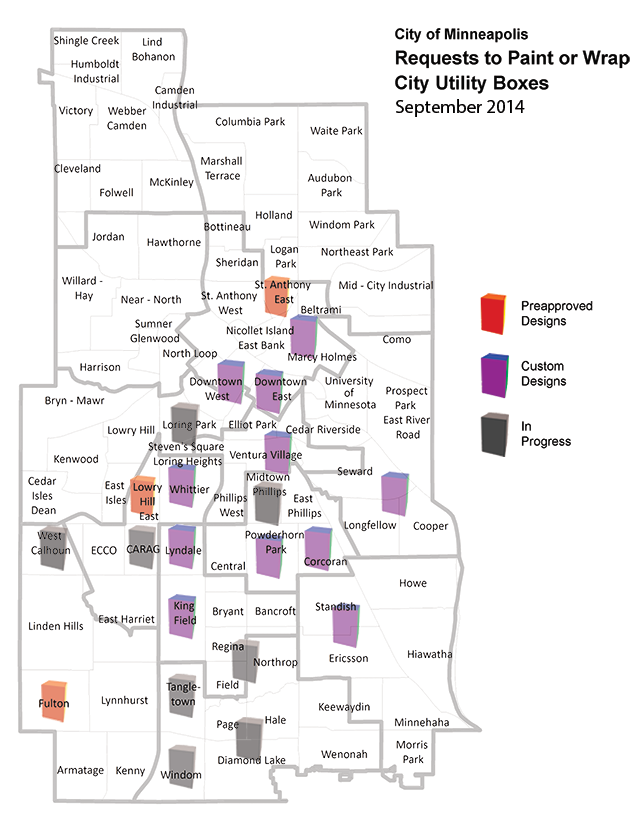