The story sounds straight out of Franz Kafka: After eight years, an obscure bureaucracy holds a lottery. Tens of thousands of people sign up for a chance to win a golden ticket that entitles them to rent an affordable place to live. But – and here’s the ironic twist – even if they win, the ticket is only good for a spot on a waiting list. It might take a decade to cash in, and even if you last that long, you only have 60 days to use the housing voucher. For some families, especially in a tight market, that might not be enough time to find a home before the voucher expires, along with the dream of a stable place to live.

This month, Americans everywhere are celebrating the 50th anniversary of the march on Selma, which launched the modern-day civil rights movement and led to legal protections in arenas like voting and employment. But segregated living and racial tensions are as alive as ever, suggesting that the ideals of the 1968 Fair Housing Act, which was spurred by a series of late ’60s riots, are still important.

At root, racial segregation remains a huge problem in the Twin Cities. A few years ago the Metropolitan Council released a thorough report detailing how “racially concentrated areas of poverty” have grown within the region. Unequal opportunities presented by our segregated educational and economic landscape make Minnesota a “miraculous” place for white families, but leaves people of color behind.

“There are so many layers of programming and funding, most people get lost in the jargon,” Jon Gutzmann, the executive director of the St. Paul Public Housing Agency told me this week.

Actual public housing, which is explicitly owned by the government, is something that dates back to the New Deal era and accelerated during the huge housing shortages that followed World War II. Nationwide, the majority of public housing is in big cities like New York City and Chicago; but within the Twin Cities, the only place you’ll find public housing is in Minneapolis and St. Paul proper, and even there, only in certain neighborhoods.

“Public housing was sited in St. Paul between 1965 and 1976,” Gutzmann told me. “If you look at the public housing map, its very un-concentrated. But there’s been no vehicle to add public housing since the 1980s. As far as any new public housing development goes, there’s no money.” 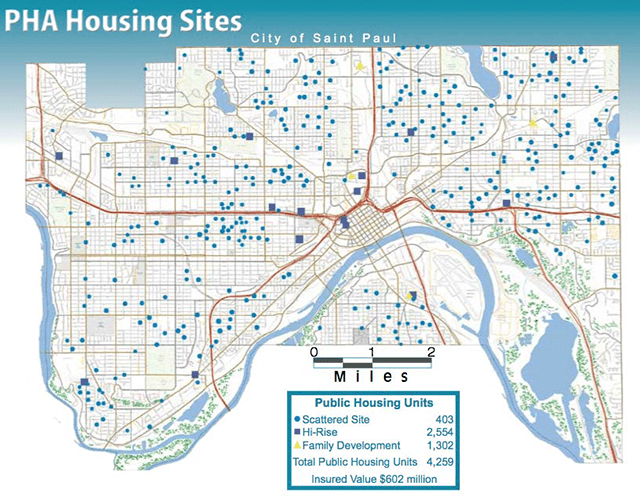 While the traditional “high rise” style of public housing in Minneapolis and St. Paul can only be found in a few places (like along the I-94 freeway corridor, or near downtown Minneapolis) these days, the “scattered site” housing program attempts to spread public housing throughout both core cities, into more high-opportunity neighborhoods like Linden Hills and Highland Park. Given the unequal landscape of our central cities, ensuring access to stable neighborhoods is a big benefit.

Once public housing became politically poisonous, Congress created the Section 8 voucher program to provide a more market-based solution to housing the poor. Compared to public housing, which is concentrated in relatively few areas of older core cities, the Section 8 housing is relatively disbursed around the region, particularly in places outside the traditional core cities and concentrated areas of poverty.

“As you can imagine, those Section 8 vouchers are like gold,” Lael Robertson, the supervising attorney for the Housing Discrimination Law Project, explained to me. “They allow you a lot more freedom because the subsidy moves with you, rather than staying with the building. The voucher allows people a chance to move into higher opportunity areas or to live in the neighborhood allegedly of their choice.” 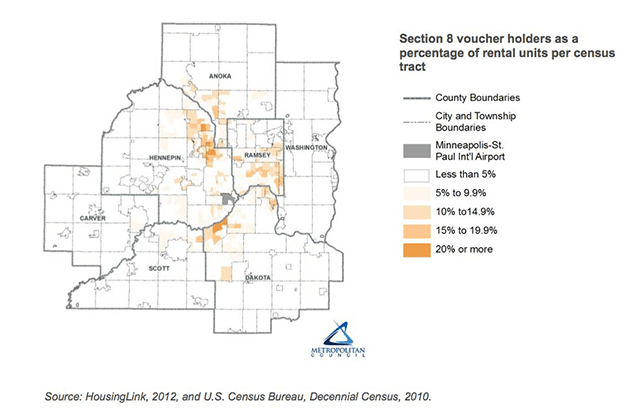 __description__
Compared to public housing, which is concentrated in relatively few areas of older core cities, the Section 8 housing is relatively disbursed around the region.

But the freedom to choose breaks down for many cites where qualifying apartments are few and far between. While some other states and cities forbid landlords from turning people away on the basis of “source of income,” Minnesota has been unable to require that landlords accept the vouchers since a 2010 state appeals court case. In actual practice, this means the supply of Section 8 housing is limited in many of the area’s nicer suburbs, exactly the places where affordable housing is needed the most.

“The reality is that it’s a federally voluntary program,” Robertson told me this week. “It’s designed to allow people choice in their housing. But that’s not really the way that it works out because, even if the rent is affordable, landlords across the region can decide not to participate. Really what we need are more landlords willing to work with the Section 8 program and accept vouchers, and for cities and the state to put in incentives for landlords to participate.”

Expanding the program to meet the huge amount of demand for affordable housing is crucial if the Kafkaesque wait list is to shrink any time soon. But with congressional partisanship gridlocking Congress, the only remaining areas where Section 8 vouchers have received new funding has been for veterans. For example, St. Paul recently received 19 new housing vouchers dedicated for veterans; that might not seem like much, but is a big deal for the agency.

The debate over affordable housing credits

The final evolution of the housing picture revolves around affordable housing tax credits, which are generally aimed at people who generally earn a bit more money — usually 50 percent to 60 percent of the area median income (as opposed to 30 percent of median income population, which is common with Public and Section 8 programs). By using tax credits, cities can make sure that working-class families, including many people of color, can afford to live in all parts of the Twin cities.

But as Peter Callaghan outlined last week in MinnPost, the key question for affordable housing developments is location: Where exactly are housing credits used? Will there be good schools, transit, and access to decent entry-level jobs?

“In the Twin Cities, we’re somewhat unique because we tend to try to solve these problems more earnestly than other regions,” Ed Goetz told me, pointing to our Metropolitan Council system, which allows for come regional control over planning and development patterns for the 7-counties that make up the core of the Twin Cities. Goetz directs the Center for Urban and Regional Affairs at the University of Minnesota, and has written extensively on how affordable housing operates in the Twin Cities. 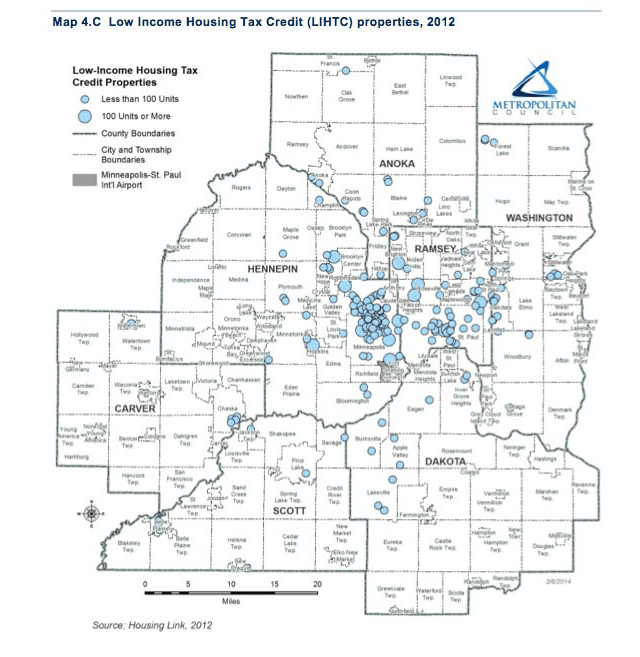 The key question for affordable housing developments is location: Where exactly are housing credits used?

Should housing be a right?

“It’s a shame we can’t get more affordable housing built to meet some of the needs,” Goetz told me. “We have suburbs that are diversifying economically and socially, and a lot of people living out there are living in really difficult situation from an economic standpoint.”

Those relying on subsidized housing for a decent place to live are going to spend years on a list, hoping for a chance at a golden ticket. Given the long wait times, and slow progress toward desegregating the metro area, the inequality conversation isn’t going away any time soon.

The ins and outs of public and otherwise affordable housing