There should probably be a warning on Amy Brendmoen’s car to expect sudden stops. Whenever she sees one of the bright yellow signs in her St. Paul neighborhood, she pulls over, gets out, and takes it down. For the last 10 years, the back seat of her SUV has been full of them.

“It’s one of these pet peeves of mine; I have no idea how many I’ve taken down,” Brendmoen told me this week. “From time to time certain businesses decide to advertise on the city utility poles or using wire stands on the boulevards. It’s anything from ‘We Buy Ugly Houses’ to job employment opportunities that are too good to be true. But you can’t advertise on poles or in the right-of-way, and that stands true for political campaigning as well.”

The No. 1 offender in St. Paul’s Ward 5, which Brendmoen represents on the City Council, has long been signs that advertising home loans. They often say: ‘We Buy Ugly Houses’ or “Sell Your House for Cash.” But for cities that depend on the stability of homeowners and home financing, these signs can undermine neighborhoods by promoting shady lending practices.

Today’s scourge of real-estate signs are not simply an eyesore, but represent the latest front in a long battle against predatory lending in Minneapolis and St. Paul. 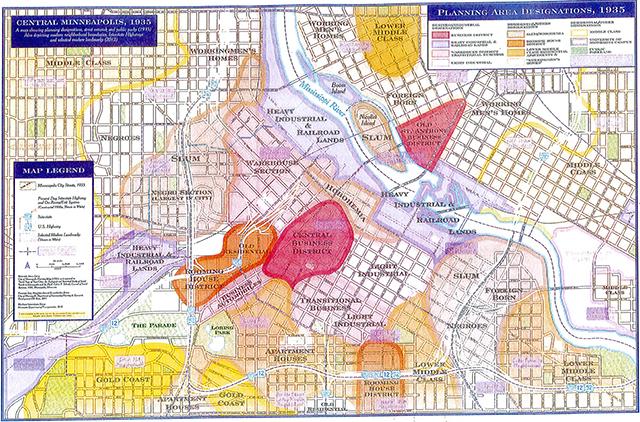 Minneapolis Council of Social Agencies
Thanks to racist federal “redlining” policies that began in the New Deal, predatory lending became a huge problem in the parts of cities that allowed ethnic and racial diversity in homeownership.

Thanks to racist federal “redlining” policies that began in the New Deal, predatory lending became a huge problem in the parts of cities that tolerated ethnic and racial diversity in homeownership. As Ta-Neshi Coates wrote in a wonderful essay in The Atlantic last year, nonwhite homebuyers abandoned by Federal FHA mortgage guarantees were often forced to negotiate with unscrupulous and unregulated lenders. Coates describes how predatory lenders systematically took advantage of African-American migrants from the South through the ’60s:

In Chicago and across the country, whites looking to achieve the American dream could rely on a legitimate credit system backed by the government. Blacks were herded into the sights of unscrupulous lenders who took them for money and for sport.

These practices, commonplace in Northern and Midwestern cities, meant that generating wealth through home ownership — the “American Dream” — has been missing for people of color for generations.

“These areas are on the edge,” City Council President Barb Johnson, who represents North Minneapolis, told me. “These neighborhoods are the ones that have been targeted over the years for flipping and mortgage fraud. We’ve been heavily impacted with foreclosures, so the predators get caught in one game, and they go on to the next game. They’ll change their stripes to try and scare people and push homeowners out of their houses.”

Even today, despite the protections of the Fair Housing Act, the struggle to build home equity has been a pernicious problem in places like St. Paul’s North End or Johnson’s North Minneapolis neighborhoods. While the ubiquitous yellow signs reveal the presence of DIY lenders on every corner, at the same time many cities in the metro area work with groups like Habitat for Humanity or the Minnesota Homeownership Center. Both organizations run hot lines for worried homeowners.

During the housing boom and bust of the 2000s big banks packaged subprime mortgages into dicey securities. Today, as the real-estate markets have continued to slowly struggle back to solvency, the marginal real estate schemes have evolved.

“The worst-case scenario with one of these sign lenders would be if they don’t actually assist the consumer in selling the property,” Nelson told me this week. “Time would have been wasted, so that real help, and options for real assistance, are lessened. They could also be taking possible equity from consumers in a situation where someone who really does own less than or has real equity built up in the property may not realize the actual worth of the home when these sign investors come in, and so they may be leaving money on the table.”

The vigilante war against predatory-lending signs

In North Minneapolis’ Jordan neighborhood, just south of Johnson’s ward, Jeff Skrenes is a long-time Northside activist and serves on his local neighborhood group. Like Amy Brendmoen, Skrenes has been collecting “ugly houses” signs for years. At this point, his garage is half full, and he’s not sure what to do with all of them.

“For quite a few years now I’ve gone around and taken them down,” Skrenes explained. When it started, it was less about housing and more about neighborhood blight. “You’re driving down the street and every other telephone pole is littered with these signs and it makes the neighborhood look and feel different. They’re not supposed to be there anyway, so I just started taking them down.” 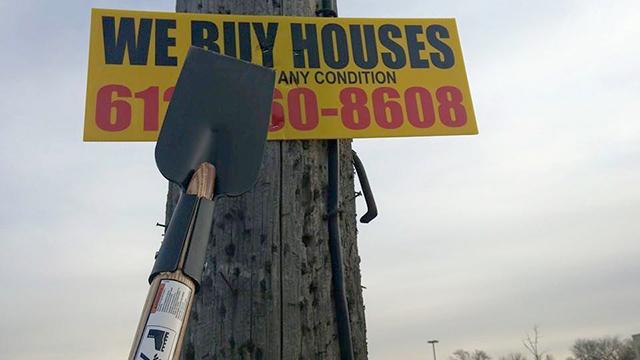 Courtesy of Jeff Skrenes
Jeff Skrenes removing a sign from a pole in North Minneapolis using a 10′ ice scraper.

On the other hand, Skrenes grew up in a small town where less formalized real-estate purchases were more common, and is active in home rehab and historic preservation community. He doesn’t want to say that all of the fringe lenders are necessarily bad for urban neighborhoods.

“I’m a little bit more of a libertarian when it comes to some of these lenders,” Skrenes told me. “There are places in the market place for this, if you don’t quality for traditional credit, on contract for deed, some of the practices. However, a lot of the abuse that happens in lending now is happening from lenders like these, because the terms of a contract-for-deed are far less regulated.”

Other than educating homeowners to the point where fly-by-night lenders no longer have an audience, the main thing cities can do is encourage more people to take the signs down on their own.

The signs themselves, cheap corrugated plastic, are difficult to recycle, though Brendmoen has a place she takes them. Skrenes is massing a collection for a future art project – a DIY “house of cards” sculpture made from the cheap but resilient signage.

To make matters worse, lenders have been increasingly placing signs higher up on poles, hoping to elude the long arm of neighborhood do-gooders. That just means that the sign vigilantes will have to get more creative. For the last few months, Skrenes has kept a 10-foot snow scraper with him to take down the high signs, just out of reach.