“Movable chairs come to Nicollet Mall!” the headline reads, touting a brand new idea from an urban design consultant. The effort is part of a redesign aimed at revitalizing Minneapolis’ main shopping street.

Only the headline is from 1988, when the Metrodome was still new, and the chairs quickly disappeared into the alleyways of history. But the idea has returned, almost 30 years later, as part of the flashy plans for a remade Nicollet Mall.

Even expensive consultants readily admit that most hot urbanist ideas are old news. The basic tenets of good street design — small active blocks, people-watching, comfortable sidewalks — were thoroughly laid out in 1961 by Jane Jacobs, and nobody has done a better job since. For 50 years, the problem with American cities has never been a lack of good ideas. Rather, our cities have failed to execute good street design, and it’s a mistake we seem to make repeatedly. 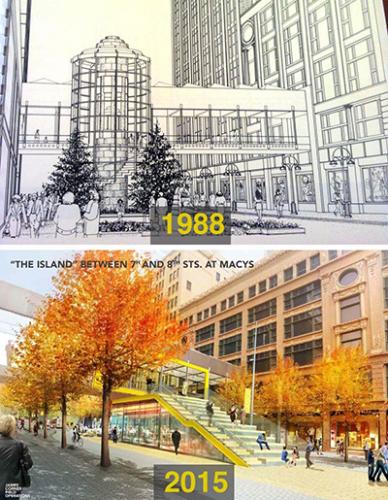 As the tale is told, Nicollet Mall emerged as part of a suite of reactions to suburbanization. As shoppers and office workers fled the center city for the ever-expanding ‘dales and office parks (and finally the Mall of America), downtown property owners grew desperate to do something to lure people back into the city.

Most of the key features of today’s downtown landscape trace back to this time. The first was the destructive urban renewal of the Gateway district, the area surrounding Washington, Nicollet and Hennepin Avenues. Next came Nicollet Mall, which disrupted the street grid for better and for worse. In 1961, downtown property owners were surveyed about what solutions they’d like to see on the city’s main shopping street, and given five choices that ranged from full-blown pedestrianization to underground tunnels. They opted for a “transit mall” centered on a bus system. Well-known architect Lawrence Halprin was hired, and a few years later Minneapolis had a main street that would become the background for a ’70s sitcom (shot in LA).

Finally, the skyway system was gradually built out, achieving critical mass with the 1972 completion of the IDS center, still the city’s signature building. The key components of downtown Minneapolis were in place. (Since then, the biggest changes to the downtown landscape have occurred around the edges of the core: the riverfront parks, the wide network of bike lanes, and the light rail along 5th Street.)

Flashback 1987: The case of the skyway towers

Yet this isn’t the first time Nicollet Mall has seen a makeover. During the 1980s, downtown Minneapolis was in the midst of another big construction boom aimed at revitalizing the office and retail core. At the center of the efforts was a redesign of the decades-old transit mall. Much like today, a famous consultant was hired (BRW), state and city money were earmarked, and downtown property owners were roped into a contentious political process around a remodel.

This week I did some digging in the wonderful James K. Hosmer city archives on the top floor of the Central Library, and pored through the old news clippings from 25+ years ago. Frankly, it’s surprising how similar the key ideas of both remodeling processes look.

Back in the ’80s, Nicollet Mall was seen as an aging street unable to compete with suburban shopping and office parks. Designers pointed out the lack of contiguity between the fairly successful center (near the IDS Tower and Dayton’s) and the north and south fringes of the mall. In particular, leaders at the time identified the lack of connectivity between the streets and skyways as a key problem, which made it very difficult to foster activity at the street level.

The initial design proposal planned to create a “retailing system [that would] challenge suburban centers” by “integrating retail and public space” from 5th to 11th streets.

In response, the design team proposed a series of four glass towers that would visibly link the second-level skyway system to the mall’s wide sidewalks, connecting the two levels of downtown pedestrians and clearly opening up the skyways to the public. 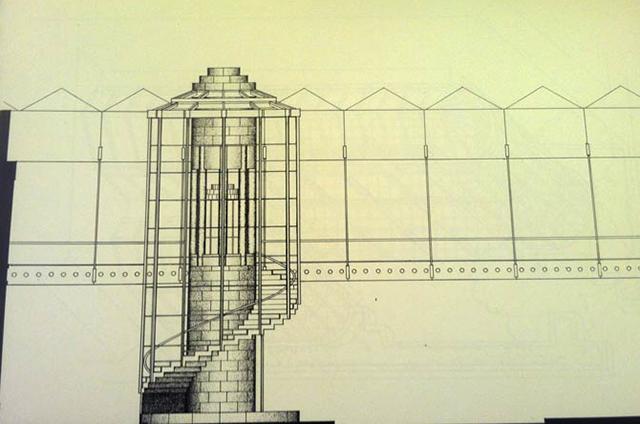 The design team proposed a series of four glass towers that would visibly link the second-level skyway system to the mall’s wide sidewalks.

The rest of the proposal also might sound familiar. The designers proposed a series of “pocket parks,” new materials and landscaping (granite and pine trees), and a bunch of ideas centered on activity programming. Architectural renderings featured black-and-white sketches showing streets filled with life.

But back in the ’80s, the political process didn’t proceed smoothly. Much like today, a rock star committee of downtown movers and shakers formed and began meeting to work out the financing and design details for the project. Then, as now, they lobbied the city and state for money, and the rest of the burden fell to a special downtown assessment district.

But things started to go sour when the money began disappearing. A group of downtown property owners and retailers formed in opposition to the project, and centered their arguments on cost. In particular, many people took issue with the proposed towers connecting the skyway to the street, fearing they would “attract vagrants” and “create drafts.”

The cutbacks began in 1988. First the plans for four towers were trimmed to two, as property owners began balking at the proposed $30 million price tag.  (That’s $62.5 million in today’s dollars, quite a bit more than the budget for this remake.) Eventually the committee decided they would trim the tower plans again, building only one tower as a “test.”

Here’s a representative quote from Dan Hauser’s ongoing coverage of the redesign in the Skyway News:

“The three items that were cut or reduced were sticking points for several property owners. Some said the stair towers would invite the wrong element into the Skyway system. Others said spending money on side street improvements was unnecessary. As for the pocket park [by then whittled down to one], the owners of the land where the board had hoped to build it were opposed to the idea.”

By August 1989, after the City Council again cut the budget, the skyway towers and pocket parks were abandoned altogether, along with other grandiose ideas like heated sidewalks and a free shuttle bus.

By the time the “new” mall was actually built, the changes were largely superficial. Crucially, the mall was reconstructed without any new straightforward connections between the confusing skyway system and the street below. Downtown Minneapolis has struggled with that problem ever since.

Though there are a great many newer and shinier elements to today’s mall makeover — see: sky-reflecting overhead mirror, akin to Chicago’s famous Millennium Park “bean” — at first glance it appears the same problems have resurfaced. As Marlys Harris reported earlier, today’s consultants identified a lack of connection between the skyway and the street as a central problem with revitalizing the street life on Nicollet Mall. And all through their initial proposals, the architects proposed “the island,” an open public staircase that would connect the mall to the skyway. The proposed connection was in exactly the same location as the scuttled glass towers from the 1980s.

But just like the last time, the idea has been rejected. This time around, the connection was seen as “invasive” and “challenging to operate.”

As in the ’80s, I’m sure that the redesign will be an improvement over the often-mediocre status quo. This time around, church kvetching aside, there’s a lot more agreement by the decision-makers about the value of diverse street life, transit and quality public space. And the problematic remarks about panhandlers and poverty seem to be less obvious.

Downtown pedestrian malls are a difficult thing to get right. Particularly given the skyway system looming overhead, Minneapolis has an uphill battle to build a shopping street with a consistently compelling street-level experience. Without unifying the city’s grade-separated throngs, a real downtown shopping street, like Madison Wisconsin’s State Street or hundreds of shopping streets in Europe, will likely remain a pipe dream.

Despite the flashy renderings and slick design, with the current plans the fundamental problem with the downtown street experience remains. Without including “the island” staircase connection, Minneapolis is again missing a chance to desegregate the skyways from the public realm. Maybe in another 30 years we can try again.

Nicollet Mall: As in the ’80s, redo saw a need for skyway-street connection but abandoned it