Technically speaking, a small patch of Runway Three at Minneapolis-St. Paul International Airport is part of the Minneapolis park system. But it’s land that, for obvious reasons, isn’t used for picnics or recreation.

For every big-name, landmark city park, there are a dozen small, marginal and overlooked spaces that are also part of a city’s park system. How these oddball parks function in real life can be quite intriguing.

Dickerman Park: a park in name only

Like most of the marginal parks around the Twin Cities, St. Paul’s Dickerman Park has a back story involving a dewy-eyed philanthropist: In this case, the Dickerman family in 1909. But for all practical purposes, a century after the Dickermans dedicated the land, the park remains more dream than reality. Currently the site simply looks like large front lawns for the adjacent buildings; at its far West end, the park is even being used as a parking lot for the cavernous Griggs-Midway building.

That may change, though, thanks to efforts by St. Paul to transform the (literally) marginal space into something resembling a city park.

“Virtually everyone said, ‘I didn’t know this was a park,’ ” Jenna Fletcher told me this week. Fletcher, program director for the Trust for Public Land, is one of the activists who has been organizing to resuscitate the overlooked park. She recently helped get a $2 million grant from the city’s “8-80 Vitality fund” for the park, to redesign and improve the neglected public space. 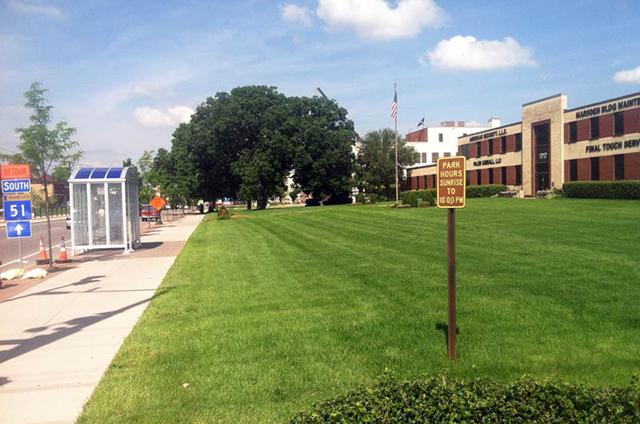 MinnPost photo by Bill Lindeke
If not for the small sign, nobody would know that St. Paul’s Dickerman Park is public land.

“Dickerman is unusual because of the uses there: a couple of parking lots, and other less-than-optimal uses,” Ellen Stewart explained. Stewart is the new open space planner for St. Paul, charged with incorporating green space, parks and environmental quality into new developments throughout the city.

“It is a little difficult to get people interested in planning it,” Stewart said, “but we want to make it as flexible as possible.”

According to Stewart, the park faces multiple challenges: It’s not bounded, it’s linear, and it sits very close to University Avenue. That means that improving the park will rely on cooperation with neighbors.

“The park looks like the front lawn of these businesses,” Jenna Fletcher explained. “But they’ve done yeoman’s work to work with those adjacent buildings. We’re hoping the city can turn that park space to a real park in through collaboration and cooperation.” 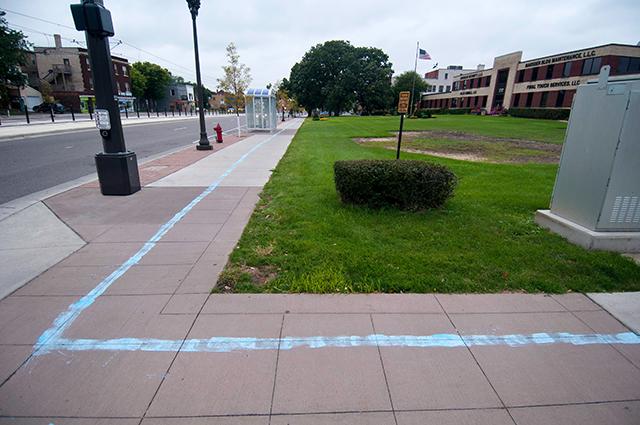 Courtesy of Jenna Fletcher
A blue chalk line demarcating the boundaries of Dickerman Park, part of an engagement effort by St. Paul.

Growing up near the West Side of St. Paul, I probably passed Albert Park at the corner of Smith, Dodd and Annapolis 10,000 times. It’s the kind of place you notice once, and then forget about: a tiny triangle of grass sitting between three streets, replete with obelisk, flag, and a couple of plaques. It looks like the kind of “green space” you find in architectural renderings, and to this day, I’ve never once seen anyone sitting there or using it for anything much.

“There’s a monument there that claims that Ripley’s Believe it or Not declared it the smallest park in the U.S.,” Dave Schettley told me, “though in our research we can’t find any record of it being registered with Ripley’s.”

Schettley is West St. Paul’s assistant parks and recreation director, and readily admits that the triangle is the city’s most unusual park.

“The park is named after a kid named Albert LeFevre,” Schettley explained. “His dad petitioned to get the park established, [after] his teenage son drowned swimming in the Mississippi. The dad petitioned the city to have strip of land created as a memorial to his son.” 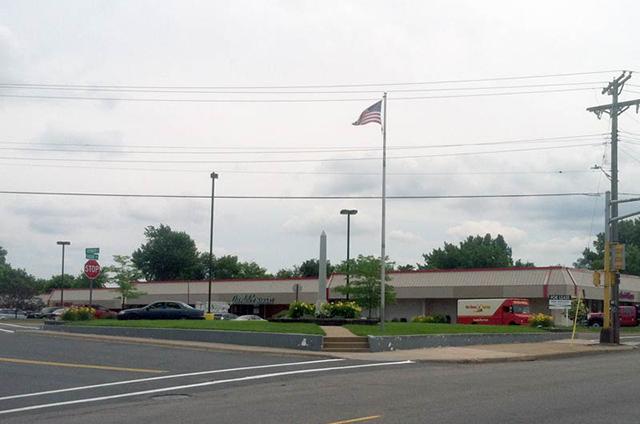 MinnPost photo by Bill Lindeke
“There’s a monument there that claims that Ripley’s Believe it or Not declared it the smallest park in the U.S.”

For years the park was a simple memorial on the grass, until the 1960s when local businesses got together to fund and install a wall, a light and a flagpole.

“There’s also a GPS cache hidden in the park, so that’s another oddity,” Schettley told me. “In the park itself, there’s irrigation, and electricity that lights up the flagpole. Oddly, it’s one of our higher-end parks to maintain.”

Much like front yards, some parks can serve as backdrops, symbols of idyllic notions of landscape. But it’s rare to see so much attention to detail placed on a small, rarely used park, sitting between three roadways.

The West St. Paul Smith triangle is a particularly noteworthy specimen, but its species is far more common. You can find these little “triangles” scattered throughout the city’s historically bourgeois neighborhoods, wherever two or three gently curving streets are gathered together in the name of tranquillity.

Yet these little scraps of land can pose challenges for cities, particularly when maintaining them requires lots of staff time for (geographically) minimal return.

“Now we just say ‘No, thank you,’ ” Jody Martinez, the design and construction manager for St. Paul’s Parks Department, told me. One hundred years ago, cities were pleased to accept donations of land for park dedication, but these days, maintenance costs are adding up.

“It’s really difficult to maintain those small parcels,” Martinez explained. “Some are utilized very well, and there are some cases where successful community groups have taken them on, and are using them for gardening or uses like that. [But] they can also just become an eyesore. ”

To help with the struggle for ongoing maintenance of these often tiny bits of parkland, cities typically turn to neighbors or volunteer groups for help. (In Minneapolis, these loose contracts are called “volunteer stewardship agreements.”)

“We just basically mow them and take care of street trees there in a pruning regimen,” Justin told me. Long is the assistant superintendent of environmental stewardship for the famously independent Minneapolis Park and Recreation Board.

“Some of them have gardens, and fall into our gardening program, and some have agreements with neighborhoods,” Long explained.

A similar trend is so-called “public/private partnership” park (see my earlier Cityscape columns about the Yard/Commons park, or the proposed Mill Ruins Park, both in downtown Minneapolis). As St. Paul’s Ellen Stewart explained to me, the benefits of private financing often outweigh the potential pitfall of lack of public access, and she is attempting to create more of these spaces along the Green Line corridor in Saint Paul.

In her urban opus, “Death and Life of Great American Cities,” Jane Jacobs devoted a chapter to debunking the still-common myth that “neighborhood parks” and “green space” are universally beneficial to cities. She writes:

“Too much is expected of city parks. Far from transforming any essential quality in their surroundings, far from automatically uplifting their neighborhoods, neighborhood parks themselves are directly and drastically affected by the way the neighborhood acts upon them.”

In other words, parks are people. The qualities of a good park depend on creating social spaces that reflect and catalyze the best of their surrounding neighborhoods.

Every city’s list of parkland includes oddball spaces like these, and figuring out what to do with them requires no little degree of creativity. With a little help from neighborhood friends, these small parks are beginning to bloom.

Exploring the Twin Cities’ weird, tiny and even paved-over parks