In a way, the fast-food drive-thru might be the peak of American civilization. The ability to stop, order anything you want and have it handed to you within minutes, without even having to put your car in park, is nothing short of a miraculous testament to modern technological privilege.

But drive-thrus also cause a lot of problems, particularly for people trying to live or walk near one. As cities like St. Paul try to become more walkable, people are looking more critically at the complexities of the ubiquitous drive-thru.

Families love them, bikes do not

These days, cities like St. Paul are doing their best to limit drive-thrus through mixed-use zoning, which explicitly discourages “auto-oriented uses” like drive-thrus, car repair shops, and large surface parking lots. (Currently, drive-thrus in mixed-use “traditional neighborhood” zones require conditional use permits from the city, which allow city staff to alleviate their impacts.)

Changing the drive-thru culture does not come without a fight. (See, for example, my earlier Cityscape column on strip malls, where drive-thrus were often a sticking point with mall developers.) The appeal of drive-thrus is probably greatest for parents driving with small children, when getting into and out of the car is a big chore.

“Starbucks’ drive-thru was a lifesaver when I was a mom with a very fussy baby,” Sarah Beilke Champe told me. “Sometimes it was the only interaction I had with an adult during the day.”

On the flip side, drive-thrus can be inaccessible to anyone not in a car. Many fast-food restaurants close their walk-in restaurants late at night, while keeping their drive-thrus open (sometimes 24 hours). This practice actually prompted a lawsuit against a local White Castle back in 2009, when a woman on an electric scooter argued that drive-thru-only service amounted to discrimination.

(I’ve heard lots of stories of people riding bikes or walking dogs going through drive-thrus, but this is mostly just for banks or pharmacies.)

The worst-case scenario for an urban drive-thru has to be the Snelling Avenue Taco Bell, which because of a historical accident is pushed up right next to a residential neighborhood.

Because its original permit dates back to 1973, when the company was called Zantigo, the city has almost no regulatory leverage over the restaurant. This was before the modern drive-thru existed, and well before the emphasis on late-night hours, so the restaurant’s “special use permit”  came with no strings attached — leaving the city and  neighborhood with few controls over things like hours, noise levels, or security concerns.

The Taco Bell drive-thru debate came to a head this summer as the company proposed to rebuild the decades-old building and redesign the drive-thru, which would require a “conditional use permit” from the city.

“The whole theater of the drive-thru experience is pretty fascinating,” Kristine Vesley, who lives directly behind the Taco Bell, told me. “People love that ritual of pushing the speaker button and hearing the tinny worker voice asking them what they’d like to order. They love inching along in the line bopping in their seats and drumming on the steering wheel. They love the disembodied hand giving them a bag of greasy food.”

But in their public comment to the city, the closest neighbors, the Vesleys, offered extended documentation of the noise, trash and passed-out people generated by the late-night drive-thru. Because late-night drive-thrus don’t offer bathrooms, many people simply urinate in the alley, and the Vesleys’ documentation of years of nuisance are neatly categorized according to type of loud car, or the politeness of the public urinator. The couple also included years of correspondence with city regulators and staff, trying in vain to rein in the hours and nuisance. 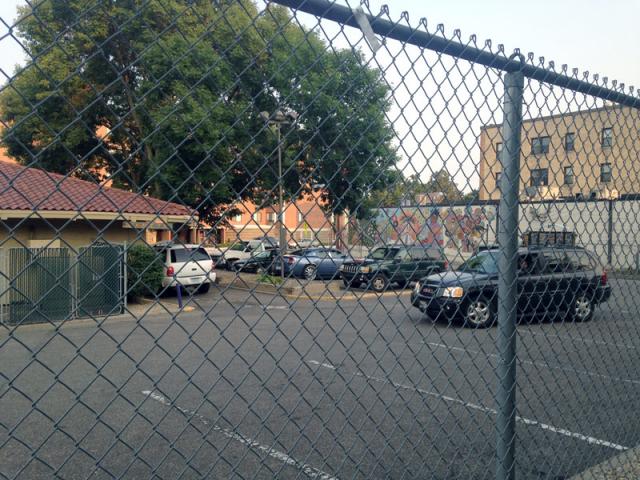 MinnPost photo by Bill Lindeke
Cars stack up in the Taco Bell drive-thru during the day.

After weeks of deliberation and back-and-forth between Taco Bell and the city’s Zoning Committee, the issue came down to a few details: The city wanted hours reduced to 1 a.m. on weekends, and a security guard on site, but the company balked at the proposal. In the end, profits outweighed politeness, and Border Foods withdrew their application.

“We’re really disappointed that Border Foods was such a sore loser,” Kristine Vesley told me after the final hearing. “A 2 a.m. closing was their line in the sand, even though other similarly situated Taco Bells close at midnight during the week and 1 a.m. on weekends. We objected to the intensity of this drive-thru use in this particular location, more like a wild after-party with nine cars idling, full of occupants yelling and radios blaring and horns honking — open 22 hours per day, and only because of a flukey old permit. Having this Taco Bell drive-thru operating for five to six hours per day without the building and rest rooms open is just stupid.”

Another dynamic is that drive-thrus damage walkability because they require so many curb cuts cut into the street. For example,  just past downtown along Saint Paul’s West 7th Street, hotels and apartments are quickly rising in long-empty parking lots.

The new development prompted questions when, last year, a drive-thru proposal emerged that would have transformed an old Dairy Queen into a drive-thru Brueggers/Caribou hybrid. It would have required two loops of car lanes surrounding a small, one-story restaurant.

“We had purposely rezoned that part of West 7th Street,” Adam Yust, who is on the board of the local neighborhood group, told me. “Across the street from the site, there are amazing historic buildings, and we wanted more of that on West 7th. The board was unanimous, and made a motion to deny approval because it was the complete opposite of our long-term plan and visions for the corridor.” 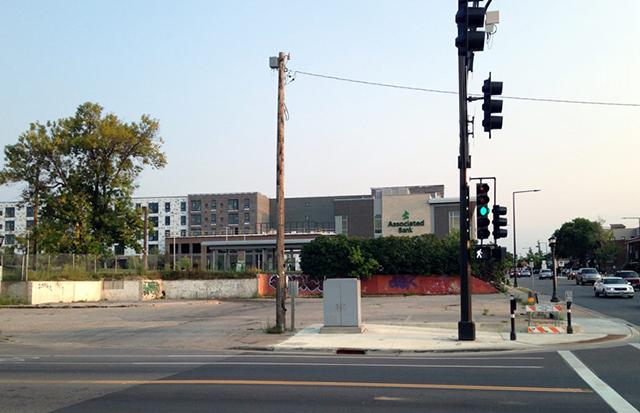 According to Yust, the more that driveways are built up and onto the sidewalk, and the more cars are driving over them, people will be less likely to walk around.

“The future of West 7th is not a car-oriented street,” Yust said. “If you’re walking down the street, you don’t want to walk through two cut-thrus within 30 feet of each other. Plus they were asking for more parking spaces than the minimum. They could have put a two-story building there, and that would have been fine. But, it was clear that they wanted to keep the neighborhood paved over.”

After meeting resistance from the local neighborhood group, the developer withdrew the application. To this day, the Dairy Queen remains empty, and the land is used mostly for Xcel Center event parking.

A fit for marginal spaces?

Not all drive-thrus are immediately shot down. The Southeast corner of Snelling and Marshall is an awkward space, where a drive-thru might be the only reasonable fit. For the last few decades, the site has housed a bike shop, a (long-shuttered) car-repair place, and a drive-thru coffee kiosk where a lonely employee sat in a tiny box distributing hot coffee to passing drivers.

But as the corner changes with the new Snelling Avenue bridge and new mixed-use developments just blocks away, plans for the oddly shaped parcel have prompted debate in the neighborhood. This summer, a developer approached the neighborhood with a proposal for a drive-thru Starbucks.

“Many of us [in the neighborhood] feel that a drive-thru does not belong there,” Anne White, who chairs the land use committee for her neighborhood group, told me. “This a place where we’re trying to get transit-oriented development, and to make it more walkable. This is just completely in the wrong direction. It’s a suburban model but apparently it increases their profit by 40 percent over not having a drive-thru.”

The primary concern for the neighborhood group is that the drive-thru proposal won’t do anything to improve the surrounding neighborhood, and that it might cause massive traffic headaches at the busy intersection. Indeed, the developer has gone through multiple revisions with MnDOT and the city, trying to figure out just how many left-turn lanes and how much “stacking” (i.e. spaces where cars can idle as they queue up) the spot will require.

“This site has been a mess for 20 years,” Anne White said. “Its not a beautiful location by any means, its east side and south side have great big retaining walls [and] essentially people voted in favor. They felt that Starbucks had done as much as they can do to make this more palatable, and that we should let them go ahead.”

In the end, the committee members held their noses and voted to approve the Starbucks’ plans, citing the awkwardness of the site for more walkable developments.  The plan will go to the city for consideration later this year.

The ins and outs of drive-thrus, and why they’re bad for cities