“The great Cupcake debacle,” people still murmur at City Hall. It was four years ago, and an up-and-coming cupcake shop wanted to open a Grand Avenue storefront. It was the kind of thing that the mayor’s office and the Chamber of Commerce dream about — St. Paul on the cutting edge of cultural tastes.

But it never happened. The proposed store fell two parking spaces short of the street’s zoning requirements, and granting an exception proved so contentious with the neighborhood that the City Council rejected Cupcake. After months of publicly fruitless negotiation with City Hall, the bakery opened at the Mall of America instead.

Grand Avenue parking rules are something of a bloodsport, with no quarter given. Regulations are fiercely contested between the dozens of apartment buildings, small businesses, restaurants and large retail chains that do business on the quaint street. And every few years the city tries to simplify matters by proposing parking meters or other changes. And time and again, plans for new rules meet their Sisyphean end, failing to find consensus.

And this year it’s happening again. The mayor’s proposed tax levy, which relies on new parking revenue on Grand and downtown, was adopted unanimously Wednesday by the City Council. Exact details will be worked out before the end of the year, but the Grand Avenue meters are sure to become a hot button.

If you go to Grand Avenue today, you’ll already see signs up in the doorways of businesses saying “Tell Mayor Coleman, NO PARKING METERS ON GRAND.”

“Our businesses are very very much against it,” Jon Perrone, head of the Grand Avenue Business Association, told me this week. “It’s another tax to their customers and inconvenient for the residents. It’s a headache for customers try to find parking podiums. A lot of our businesses are in-and-out businesses; you come in to buy ice cream and a cup of coffee. You might stay longer at businesses, you may stay an hour and have dessert and a drink.”

MinnPost photos by Bill Lindeke
If you go to Grand Avenue today, you’ll already see signs up in the doorways of businesses, saying “Tell Mayor Coleman, NO PARKING METERS ON GRAND.”

Grand Avenue is a civic success story and a stop on any St. Paul tour. It’s an old streetcar street, with great contiguous stretches of 1920s apartments next to a mix of single family homes and two-story shops. During the 1950s it evolved into an urban hub for auto dealerships, car-repair places and their accompanying parking lots — before evolving again during the ’80s and ’90s into an eclectic mix of shops, restaurants and apartments.

But the diverse legacy of Grand Avenue leaves a lot of questions, particularly about parking. Residents in old apartments need somewhere to keep their cars, while shoppers want to pop in and out through the front door. Meanwhile, restaurant-goers are looking for a spot for a few hours, while hundreds of the street’s employees need somewhere to store their cars while on the clock.

So what’s the best way to meet all these different demands?

At first glance, parking on Grand might seem simple, a tabula rasa free-for-all. You get lucky or you don’t, and you keep driving until you find your chosen spot. But if you walk or drive down the street today, you find just about every kind of parking sign there is. Depending on where you are, you might be allowed to park for 15 minutes from 8 a.m. to 9 p.m., or for one hour or two hours from 8 a.m. to 6 p.m. Or sometimes you can park for two hours any time of the day, unless you’re a resident with a permit, in which case you have two or three blocks where it’s OK to put your car.

Some of the side streets have resident parking districts, but most don’t. And many businesses have their own parking lots, which are often full. There’s one large ramp at Grand and Victoria that sits empty most of the time.

MinnPost photos by Bill Lindeke
Depending on where you are on Grand, you might be allowed to park for 15 minutes from 8 a.m. to 9 p.m., or for one hour or two hours from 8 a.m. to 6 p.m.

To an outsider, it seems confusing. But for the Business Association, meters are a solution in search of a problem.

“We’ve heard people who grumble that they can’t park in front of their business, but meters aren’t going to solve that problem,” Perrone told me. “We’ve never once been approached about what we’d like to see. Let’s do an active parking study in the entire city, and look at these mixed-use areas like Grand Avenue, Selby, Arcade. Let’s look at a good solution as opposed to a bad solution.”

The secret science of parking

The parking meter was invented in the 1930s in Oklahoma City to manage a huge demand for car storage in its congested downtown. In those days, downtowns were the big destination, with the majority of businesses, offices and shopping destinations crowding for space amongst the streetcars, trucks and ever more drivers. Parking meters, along with the rapid rise of pay-for-parking ramps, were a huge relief.

Today, for something that occupies so much civic attention, parking receives little scrutiny. The science of setting ubiquitous “off-street parking minimums” is very sloppy, and most cities simply copy what everyone else is doing without giving it much thought. This is one big reason the American landscape is dominated by parking lots.

But over the last decade, a quiet revolution has developed over how cities approach parking policies. As it turns out, parking in any popular area always involves a tradeoff between cost and convenience. (Parking in unpopular areas is a breeze.)

Here’s the Catch-22: if you make parking free, then it’ll be very difficult to find. Drivers will end up circling the block in search of a rare spot, and as anyone who’s ever done a tight three-point turn in a full lot, or a spontaneous U-turn to “grab” a just-opened spot knows, these experiences can be frustrating for drivers and dangerous for everyone else. You end up with situations where a high percentage of traffic is simply “cruising” for a spot, and chaos ensues.

On the other hand, the only way to make parking convenient, apart from paving the city, is to add a price tag to it. Parking meters, especially the new programmable ones used by both Minneapolis and St. Paul, end up sorting out the cheap from the needy.

At least, that’s the theory. 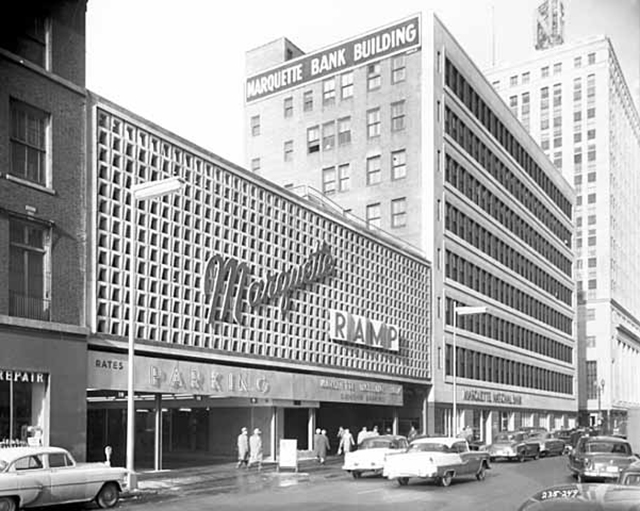 Courtesy of the Minnesota Historical Society
Parking ramps were a huge relief during the era when downtowns were the big destination.

The eternal return of the Grand Avenue meter

St. Paul has done eight major studies of Grand Avenue parking over the last 30 years. The last time was about 10 years ago, when a task force met for over a year and produced a host of suggestions for how to improve parking tensions on the street. In the end, nothing was done, and not much has changed.

“It’s sort of incredible the amount of time we have spent on this,” Kathy Lantry told me. “It’s been a conundrum that the city has been struggling with for decades.”

Lantry is the head of St. Paul’s Public Works Department, which manages parking policy. And because she used to be the City Council president, Lantry has had a front-row seat to the city’s parking debates through the years. (She and was one of the votes against the Cupcake proposal four years ago.)

If you page through at the City’s lengthy 2006 study, it explicitly cites the work of innovative parking planner Donald Shoup’s work (whose book, “The High Cost of Free Parking,” was new at the time) and suggests that the best solution would be to re-balance pricing between on- and off-street options. On-street meters for shoppers would be tweaked to ensure turnover and convenience, and free ramps farther away would beckon employees or skinflints.

“Many of these are small businesses, and any sort of uncertainty causes anxiety for them,” Lantry told me. “I get that, but there’s this overwhelming thought that this will be the ruination of their businesses. I don’t think that actually bears out. You just  have to cross the river, and Minneapolis has meters everywhere. Commercial districts have not been harmed, and I don’t know that Uptown would be considered lousy.”

The opening scene of the 1960s counterculture classic film “Cool Hand Luke” shows Paul Newman’s character drunk on a Southern small town main street, cutting the heads off of parking meters. What follows is an epic tale of stubborn defiance, with Newman’s character butting his head against the law time and again.

Judging by what the Grand Avenue Business Association has said so far, that “there is still time to roar” against meters, this time will be little different. Nobody wants to see change, particularly if it involves spare change.

Meanwhile Director Lantry says the matter is out of her hands. She believes parking meters are a good policy, and she’s going to put it on the table.

“My job is to make recommendations to the mayor about implementing changes we think will have a positive effect,” Lantry said. “It’s up to policymakers eventually to decide whether or not that makes sense. St. Paul isn’t on the cutting edge here, putting meters in our commercial districts. I suspect, in some ways, we’re far behind. We are an actual big city.”

Given the history of this issue, and the sheer number of times that St. Paul has butted heads against Grand Avenue curbs, it’s hard to predict change anytime soon. A local petition against the meters already has more than 1,000 signatures, and whether the city plows ahead or puts the plan on hold for another 10 years is up in the air.

As the lawman says to Cool Hand Luke after the latest escape attempt, “What we got here is failure to communicate.”

Will St. Paul finally end the acrimony over parking meters on Grand Avenue?