Almost one-tenth of Richfield’s population is moving out. One of the largest apartment complexes in the state was recently sold, and this month it’s being remodeled and upgraded. The most obvious sign of the changing times: The 700-unit apartment complex is changing its name from the utilitarian “Crossroads” to the uber-bourgeois “Concierge.” As a result, one of the metro’s largest refuges of affordable or section 8 voucher rental housing is being lost.

But the Richfield “Concierge” transformation reveals a lurking problem with a tight rental market and slow construction of new housing. If the trend continues, finding housing in the Twin Cities could be even more difficult for people on a limited budget.

The unequal landscape of suburban housing

First-ring suburbs like Richfield, Brooklyn Center, Oakdale, West St. Paul and others are often overlooked in the affordable housing landscape, which tends to focus on the core cities. But because they’re filled with unglamorous ’60s and ’70s apartments, many of these suburban neighborhoods offer refuge to thousands of lower-income Twin Cities residents, while retaining more “urban” qualities like transit service and walkability.

That might be changing, at least for those on the bottom of the income ladder. 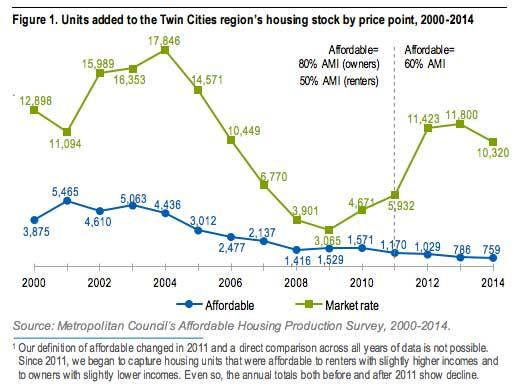 Courtesy of the Met Council
New construction of affordable housing as been trending downwards.

“The region has lost units that are affordable to people below 50 percent of the area median income,” Ed Goetz, the director of the Center for Urban and Regional Affairs, told me. “It’s part of a larger trend in the region where the overall landscape is very tough. Fewer and fewer units meet these income guidelines, and it’s a very difficult proposition for people at that income level to find decent housing.”

In general, the suburban housing landscape is deeply unequal. Affordable rental housing is concentrated in just a few cities. And even there, it is typically found only in a small number of areas, often along freeways. For example, most of the affordable rental housing in Brooklyn Park can be found south of 85th Avenue. The most affordable housing in West St. Paul lies between Robert Street and Highway 52, and in Richfield, the bulk of these homes are close to the northern edge of Interstate 494. 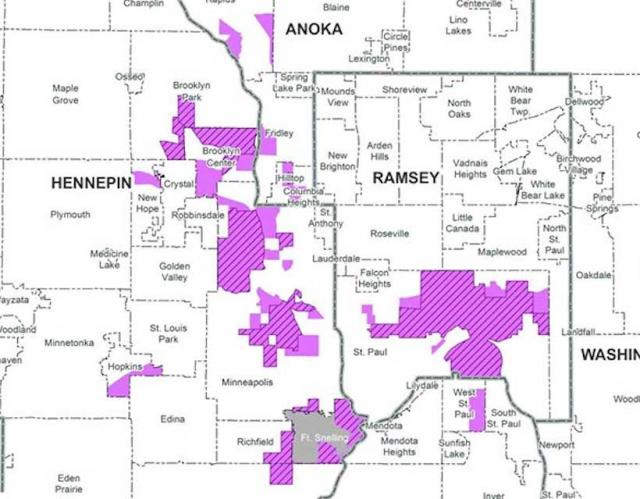 Courtesy of the Met Council
Racially Concentrated Areas of Poverty are highlighted in purple.

In metro areas with less thriving economies, housing like the Richfield apartments are in little danger of being remodeled and displacing their residents. But in the Twin Cities area, where rental vacancy rates hover around a very low 2 percent, market forces come with stark consequences.

It’s one thing to say that we need more affordable housing in the Twin Cities. It’s a completely different problem to actually build it, especially in suburban communities where the single-family home has become a powerful symbol of place and identity.

“In the closer-in suburban rings, there’s only so much land available,” Andriana Abariotes told me. She is the executive director of Twin Cities LISC, which helps affordable housing developers work on projects throughout the metro, in addition to other kinds of community development.

“We’re thinking about development patterns, and how to use commercial or transit corridors for higher density, as opposed to the middle of a single-family home community. Places like Hopkins, Richfield and some of the first- and second-ring suburbs where there’s a little bit higher density tend to be places where there’s more appetite for multifamily affordable housing, or mixed-income,” Abariotes told me.

According to Abariotes, much of the suburban affordable housing landscape is a legacy of the ’60s, an era when the federal government offered more incentives for building affordable housing. And now much of that housing is aging at the same time, especially in the older suburbs.

“Communities are dynamic, constantly changing demographically,” Abariotes explained. “So how we think about our transportation, our housing markets, and our job markets are tied together. I think we’re starting to see more communities think about how to make all those markets operate within their community, and we’re seeing more and more attention paid to affordable housing needs. And not, hopefully, dismantling too much of it.”

Diversity and representation in the suburbs

When that change happens, suburban renters are rarely at the table. Earlier last year, there was a huge political fight over the removal of 18 single-family homes for the widening of 66th Street. The displacement of poor tenants for the Concierge, though it impacted many times more people, has been met with far less resistance.

“Somebody’s able to come in buy up those properties, and in less than a year you’re going to have almost complete turnover of the residents there,” Owen Duckworth, a community organizer for the Alliance for Metropolitan Stability (AMS), told me. “They’re no longer accepting section 8 vouchers or GRH, a county program that helps find housing for people with disabilities.”

That’s a big deal for the AMS, which has launched an effort called the “Equity in Place Coalition” [PDF]  focused on tackling poverty without displacing residents. Duckworth would like cities like Richfield or other government agencies to be more aggressive about preserving and sustaining precarious affordable housing.

“There’s an underrepresentation of renters in elected and appointed positions; as far as I know, there are only one or two on appointed commissions, and none of the elected council members is a renter,” Sean Hayford Oleary, who serves as a Richfield Planning Commissioner, told me. “There’s a balance of interests between the human rights issue of housing, and the desire to be inoffensive and compatible with middle-class, homeowning residents. I think there is genuinely excitement about the fact that this “blighted” property is being “cleaned up” — a lot of that cleaning up is happening by reducing the density and excluding lower-income occupants. It’s even more dramatic in other projects, where a lot of attention goes to impact on homeowners, but very little to impact on renters.”

But what’s the solution? What happens if affordable housing begins to disappear?

“The bottom line is that, if we’re going to depend on the private sector to a large extent, we’re always going to be subject to market transactions that pull units off the rolls. I don’t think we can rely entirely on the private sector. It’s going to take some aggressive work, frankly, but unfortunately there’s not a great political will.”

Displacement of suburban renters is a sign of a larger problem