What’s the difference between a boulevard, an avenue and a parkway?

No, this is not a bad joke. For many people, street labels are mere semantics. But the “parkway,” in particular, has a unique history in the Twin Cities. These days, things are changing again as St. Paul takes a page out of the Minneapolis playbook and looks to resurrect its 19th century “parkway” system. If designed well, the plans will follow through on a century-old vision of trails and tranquil roads that connect the city’s parks.

A brief history of the parkway

When most people think of a Twin Cities parkway, they imagine little roads around Minneapolis’ lakes, or the “river roads” that line both sides of the Mississippi gorge. The Twin Cities legacy of parks and parkways is one of its greatest assets, and continues to define how waterfronts and parkland intertwine with the core urban fabric. 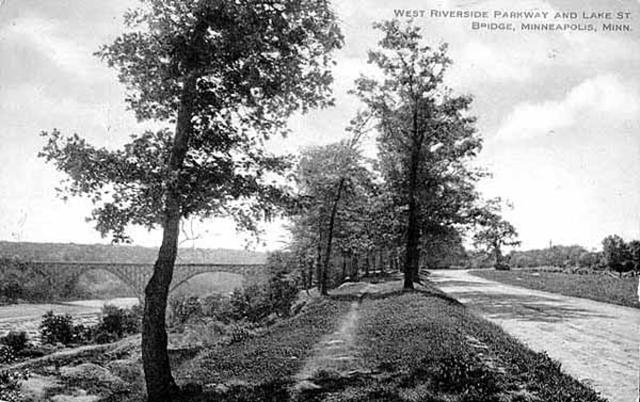 Courtesy of the Minnesota Historical Society
River Road by the Lake Street Bridge, 1910: While the road design hasn’t changed very much, there were far fewer trees and homes.

“The idea was to connect all the major parks with parkways,” Dave Smith, a freelance writer and historian who wrote the book on Twin Cities’ parks, told me. “[19th century park designer] Horace Cleveland wanted to use parkways as linear parks to connect parts of the city and provide green space throughout the city. They were the ‘lungs of the city,’ routes for fresh air.”

In the 1950s, parkways began to change. For example, the initial vision of the parkways — grass-lined roads that literally functioned as parks — began to wilt under the avalanche of post-war cars.

“It was really difficult for the Minneapolis Park Board when traffic exploded,” Smith explained. “Keeping traffic off the parkways was hard. Until the crosstown freeway [aka Highway 62] was built, Minnehaha Parkway along the creek was the major east-west route in South Minneapolis.“

Some of the earliest freeways in the country, like the New York City parkway system designed and built by Robert Moses, were originally intended for picnics and Sunday drives. But early parkways quickly clogged with cars, and the “parks” became little more than freeway medians, green space in name only. (And in the early days, when littering along parkways was quite normal, these green spaces were often full of trash.)

Today, most of the Twin Cities parkways are a delicate balance of needs, slow to change. For example, think about the recent debate over one-way or two-way bike paths around Lakes Harriet and Calhoun, or the new St. Paul restrictions on marathons and other events that have become annoyances to residents along the river road.

Minneapolis’ “Grand Rounds” system of parkways demonstrates the full range of design possibilities, everything from the lake loops to the unusual Victory Memorial Drive, a wide street lined with trees and World War I-era monuments. These streets offer a mix of two- and one-way roads, and all variety of bicycle, walking and jogging trails. But for the most part, they form a unified system tying together the city’s key parks. 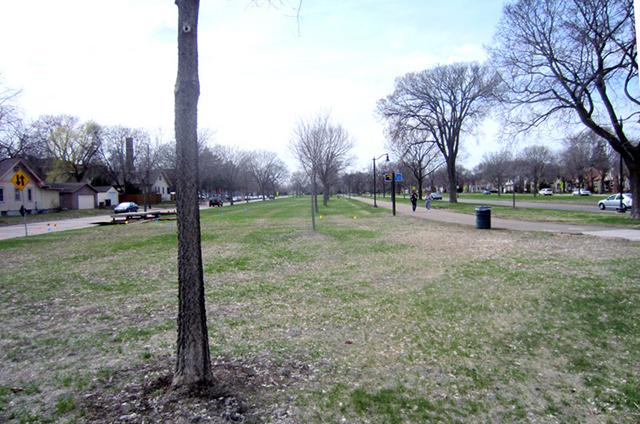 “Wirth laid out that parkway,” Dave Smith told me. “He laid it out along the contours of the land until it got into Northwest Minneapolis, and then it’s just a straight flat shot. He and [Charles] Loring decided to plant elm trees as a war memorial.”

(I learned this fun fact from Smith: The term “grand rounds” comes from the military term for a general inspecting his camp. One of the early parkway advocates, Walter Heller, had been in the Army and named the system as a way to solidify support.)

The parkway that runs through the massive Wirth Park, on the southern edge of North Minneapolis, is another fascinating example of parkway design. The road has a distinctive red pavement, and the lack of lane demarcation functions beautifully as a traffic-calmed roadway that provides balance between automobile transportation and park use.

If you look down Wheelock Parkway today, the “parkway” just seems like an oddly wide road, with ’50s ranch houses with extra-long driveways, and completely lacking sidewalks. But looks are deceiving. The wide lawns are actually a 120’ publicly owned right-of-way, a latent parkway in waiting.

The city recently allocated a large chunk of money from its “8-80 vitality fund” to add sidewalks and a protected bike trail along the route, something that comes as a bit of a surprise to the homeowners used to a car-only street.

“We try to think of what creates a perfect parkway, while listening to the community as well,” Kathleen Anglo, who works in St. Paul’s Parks and Recreation Department, told me. Anglo is one of the key staff designing the city’s soon-to-be-completed trail connections along Wheelock and Johnson Parkways.

“To us the parkway is more about having a park-like feeling to it, not about having a really wide street. So we decided to narrow the street to 24 feet and provide an off-road bike trail and also provide separate pedestrian facilities,” Anglo explained.

The design details include a wider 12” (B6-12) curb, sidewalks on both sides of the 24-foot road, and an off-street two-way bicycle path, quite a change from the relatively empty status quo.

Courtesy of the City of St. Paul
Wayfinding markers for the St. Paul Grand Round will be based on a 19th-century design from the St. Paul Cyclepath Association.

The other big choke-point for completing the “Grand Round” is over on the East Side, where building a protected bike trail will involve eliminating a series of intersections on the east side of the road, to build something that looks a lot like the Victory Memorial Drive in Minneapolis (though no street could possibly be as wide as Victory).This summer, the city will offer a “trial closure” for the trail connection and study how it affects traffic patterns.

“We’re looking at where the off-road path crosses lower volume intersections that are only controlled at one side,” Anglo explained. “We’re planning on tabled crossings there, so it gives more visual cues for the trail and having pedestrian access that maintains the same elevation.”

The changes coming to St. Paul’s parkways shed light on the delicate balance of our city’s streets. In these cases, a century of foresight is finally coming to fruition, and if executed well, will form a network of green parks and trails weave the core cities together like a figure eight.

“Parkways are meant for the broad general public to enjoy,” Anglo told me. “They’re not to be these privatized spaces, which has been challenging. But by creating this recreational and transportation network, we’re coming full circle, back to where we started.”

St. Paul looks to up its parkway game