Over the last 50 years, skateboarding has gotten a bad rep. I can easily conjure the cliché: grumpy building managers or weary parking-lot attendants shaking their fists at hoodie-wearing teenagers on skateboards disappearing into the alley, the eternal struggle for vacant space. And for much of Minneapolis, that’s how skateboarding has remained, a DIY practice thriving at the margins or in large, privately owned suburban complexes.

But skateboarding is changing fast. Over the last few years, cities like Denver, Portland, Philadelphia and Calgary, Alberta, have invested in iconic skate parks that have filled underused public places with life and creativity. Starting this year, the Minneapolis Park Board, with help from a nonprofit called City of Skate and input from the city’s skating community, is rethinking the role that skate parks play in its award-winning park system.

The good news is that there’s a lot of room for improvement. Ten years ago, Minneapolis constructed six small skate parks, one in each park district of the city. For many skaters, the existing system remains underwhelming.

“They put resources towards it, but didn’t build them in a way that’s usable and good,” Witt Siasoco, an artist and skateboard advocate, told me. “In a way it’s like designing a golf course. It has to be intertwined with the land and has to be built by somebody that actually does the activity.”

But despite the lackluster design, Minneapolis’ existing skate parks are still heavily used. Along with basketball courts and fish restaurants, they are some of the most peopled elements of the park system.

That’s one of the huge reasons skate parks have become a key component for city park systems elsewhere. Existing park amenities like playgrounds or ball fields tend to attract younger children or more organized activities. But that leaves a lot of less formalized park activities out in the cold, especially for the all-important teenage demographic. Skate parks are ideal for providing places for creativity and play for precisely this group.

“The bottom line is that a skate park has to be great for skateboarders,” Paul Forsline, one of the founders of City of Skate, told me. “We want to make sure that the city invests in good skate parks that put the skateboarders first, but also invests in great spaces that are good for the city at large.”

One example: I was living in St. Paul’s North End when they installed a new skate park on an underused patch of parkland in a rundown light industrial area off Front Avenue.

According to the skaters I talked to, the Front skate park isn’t that great for skating — but that didn’t seem to matter to the neighborhood kids. While waiting for the bus on the corner, with the city’s asphalt pothole plant looming in the background, I was amazed at the skate park’s consistent buzz. From the very first days of spring until the last days of late summer, skaters were hanging out and doing tricks. Compared to any other public space in the neighborhood, this little patch of asphalt was the most heavily used at all times of the day.

(For video evidence, see here or here: as Andy Sturdevant described in a MinnPost column, skate videos have a rich and ongoing tradition.)

“Good parks need to be able to flow and to handle good crowds,” Phil Schwartz told me this week. Today Schwartz works as a housing inspector, but he grew up exploring downtown Minneapolis on a skateboard. “Flow would be like that things go in a direction. You do a trick on one obstacle and do a trick on the next and to be able to go in circles and do tricks without running into a wall or another skateboarder.”

Another skate park “pro tip”: Chain link fences aren’t necessary. Skateboarding isn’t tennis. When Minneapolis relocated its 10-year-old skate park in Elliot Park, they removed the fence after prompting from the skating community. Today it’s the first and only fenceless skate park in the city.) 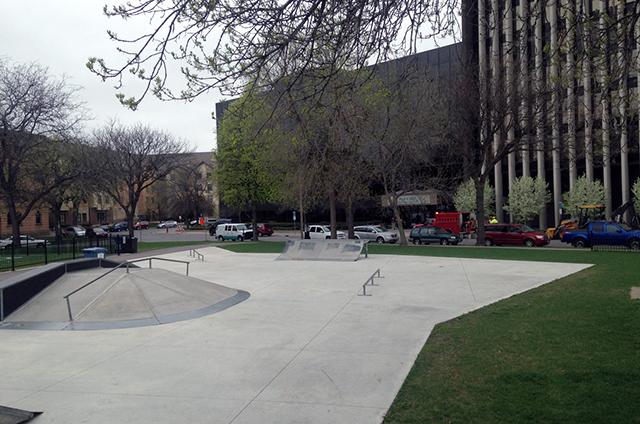 The vision: Minneapolis as the ‘City of Skate’

The City of Skate group popped up three years ago in an attempt to help Minneapolis and Park Board planners improve their skate parks. The idea is that currently the city could use some assistance from the skating community to help with design and advocacy.

For example, not all skateboarding is equal, and an ideal skate-park system will cater to many different kinds of skating. A rough taxonomy: stair skating, bowl skating, transition skating and rail skating. (Note: I cannot skateboard, so I am relying on others for this list.)

“There are different needs and wants,” Paul Forsline told me. “When you’re trying to build a park there’s that push and pull, but we’re not talking about just one park; every park is varied and different and has certain elements.”

Forsline got involved in skateboard advocacy because of his kids, who began lobbying for a skate park in their neighboring Lynnhurst Park as teenagers back in 2008. Since then he’s been advocating for better skate parks in Minneapolis, and helped found City of Skate as a nonprofit to formalize the lobbying efforts. 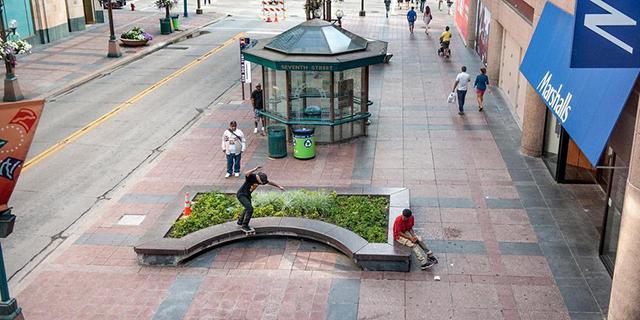 Courtesy of City of Skate

According to Forsline, the holy grail for Minneapolis skate parks would be a centrally located iconic park that could match the ambitious plans from other cities, something like Philadelphia’s 3-year-old Paine’s skate park or Calgary’s plans for a citywide system. Even more than for most architecture, the devil is in the design details. The subtleties of skateboarding are not immediately apparent to someone who doesn’t practice the sport.

“If it’s not implemented well, the first person that’s going to notice that is a skateboarder,” Forsline said. “We’re trying to create these environments where it feels great to be there, interesting whether you’re a skateboarder or not. It should be integrated into the landscape — maybe there’s a stage to have music on the weekends, skate videos, have a screen, even maybe a spot for food trucks to pull up.”

Next week, City of Skate is set to formalize its working partnership with the Park Board with an official memo of understanding. Though the recently released priority list might lead to a few changes, the first two items on the to-do list are new skate parks in Nokomis-Hiawatha Regional Park and in Northeast Athletic Field Park, on opposite ends of the city.

When talking about skateboarding, it’s hard not to slip into cliché. For example, one such trope is that cities look a lot different from atop of a skateboard. A structure that seems to others’ eyes like a forgotten bench or a concrete eyesore comes to life when skaters arrive.

For a great example of this kind of creative placemaking (yes, I used that word), check out this video of a New Zealand skater named Richie Jackson, who finds the most amazing uses for the most obscure pieces of infrastructure.

Most people who grew up skateboarding have stories of exploring their cities in this dynamic way, of testing material and social boundaries.

“It’s almost cliché to talk about it, but skating helps you look at the city in distinctive ways,” Phil Schwartz explained. “Being able to go downtown when I started skating at 14 or 15, being downtown at night, seeing all the people, some of the crazy people. It gives you a point of view on streets; anything flat ground is fair game. Again, it’s a cliché, but the city is kind of like a canvas,” Schwartz told me.

Given its origins, like street art or mountain bicycling, skateboarding grew up with a creative DIY culture. Skateboarders reveal the potential of many of the city’s marginal or underused places, from public plazas to vacant lots to parking lots. As Jane Jacobs once described, one trick of good park planning is to balance the desire to create green space with cultivating existing activity. 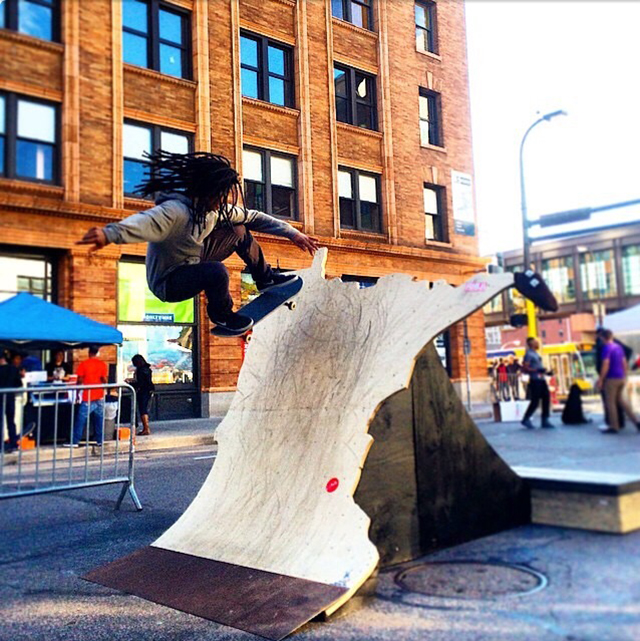 Courtesy of City of Skate

“I’m a little pessimistic that by the time the city gets a quality skate park I’ll be 40 years old,” Phil Schwartz told me. “Hopefully I’ll still be skating. And hopefully something happens in the next few years — but without the funding nothing can be done.”

The one thing that I’m convinced about is that, whenever Minneapolis actually begins completion of its first 21-century skate park system, the parks will be amazingly popular.

“City of Skate is like 3 years old,” Witt Siasoco told me.  “I’m an old skater and lot of guys affiliated with City of Skate are older, but we needed to start a nonprofit to raise funds and talk about it at a government level. It’s about getting more skaters involved in in park planning and city planning. We know it’s a longer road, but I’m really looking forward to having some really good skate parks in the city.”

Minneapolis taking first steps into the future of skateboard parks