“It’s too big! Why can’t you do something smaller, something normal, something that fits with the character of the neighborhood?”

You go to enough urban-development discussions in Minneapolis and you hear that refrain a lot. People in older neighborhoods often recoil at the scale of proposed new development, casting shade on the height, scale, or massing (technical term) of building renderings.

These days, development in Minneapolis and St. Paul is typically limited to either (ever-growing) single-family homes or large apartment buildings. Those extremes leave a hole in the urban fabric where it’s almost impossible to build the kind of medium-scale buildings commonplace in the pre-war era. It’s a problem called “the missing middle,” and a small group of Minneapolis residents, developers and potential developers are in the early stages of tackling it.

The history of ‘the missing middle’

The term “missing middle” comes out of the new urbanist movement, and generally refers to any building type larger than a duplex but smaller than a midrise apartment building. (Generally a half-block four-story building is the cut-off.) The idea is important because one of new urbanism’s key principles is the “urban spectrum,” which calls for a gradual increase in density from a city’s edge to its center.

“Right now we’re building — all cross the country — a lot of single-family houses, and a lot of large apartment buildings,” Peter Bajurny, a South Minneapolis resident and amateur urban geographer, told me. “If you look at the older neighborhoods, there’s a lot of stuff in between. But we’re not building that stuff any more.”

In Minneapolis and St. Paul’s urban neighborhoods, you can see all sorts of “missing middle” type buildings, but they generally come from one of two eras. The older date to the first decades of the 20th century, when many of the city’s three-story eight-unit brick apartments were constructed in places like Grand or Lyndale Avenues. The depression put an end to those types of buildings.

(I live in exactly one of these buildings, a six-unit three-story apartment building on St. Paul’s west side that is about a century old.)

The second wave of “missing middle” apartments date from the 1960s, and you can find these all through Uptown and the Wedge, unglamorous beige two- or three-story apartments — often with strange, historically inaccurate mansard-style roofs. (A friend of mine called these “mushroom buildings” after he lived in one for a year.) These utilitarian buildings often offer some of the most affordable rents in any neighborhood.

But since the 1970s, the vast majority of new construction has been either single-family homes or large projects of over 50 units. The lack of new “middle-scale” development is a bit baffling given how popular and affordable these types of buildings have proven to be.

The challenge of Minneapolis zoning

One of the key reasons for the lack of missing middle developments in Minneapolis is the city’s strict zoning code, dominated by R1 and R2 zoning that makes midscale building exceptional. Courtesy of Peter Bajurny
R1 and R2 zoning is indicated in yellow on the map.

“When you have 70 percent of the land only doing one thing, and that one thing is a single-family house, it doesn’t leave a lot of options to do anything else,” Jim Kumon explained. “Minneapolis needs zoning classifications that help us with better levels of precision, that might allow for something beyond single-family houses to be built. It doesn’t have to be a huge building, but right now we have small and large, with nothing in between.”

“People say they want smaller things that are more in context with the neighborhood, at a smaller scale,” Nick Magrino told me.

Magrino is one of Minneapolis’ 10 planning commissioners, and agrees that there’s a mismatch between the historic urban fabric and much of the city’s current zoning. He points to recent developments by developers Perkins Levin, of HGTV and Turkey 2 Go fame, as the exceptions that prove the rule.

“They’re pretty much the only people who are doing that small infill on any kind of scale,” Magrino told me. “They have several projects going on where they’re building four- or 10-unit buildings, and not a lot of people do that.” 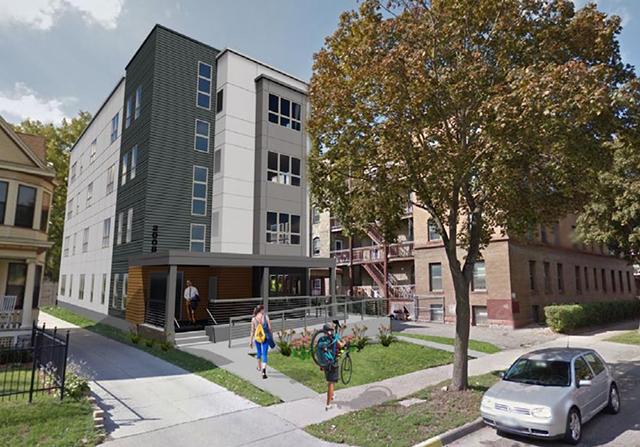 Catalyzing midrange development is one of reasons Magrino supported Minneapolis’ recent reduction of the city’s “minimum parking requirements,” which tries to address how underground garages have driven expenses for new constructions. The new rules get rid of these requirements for properties near the city’s main transit corridors.

“Now that we’ve passed parking reform we are probably going to see more small projects like this,” Magrino told me. “A 10-unit building with only two parking spots would not have been possible before, but in a high-frequency transit area we can do that. When you don’t have to build a basement for parking, it makes it easier financially.”

The other difficulty lies in the financing and the community process. Many lenders aren’t used to small-scale or mixed-use projects, and financing is often difficult through traditional channels. And on top of that, neighborhood opposition can be intense.

“There aren’t many good examples in Minneapolis, because no sane person would go through the brain damage of doing this,” Kumon told me, referring to the protracted community battles that have often emerged over development projects in South Minneapolis.

“If it doesn’t pan out financially, the risk you have to take to do a handful of units are the same risks to do a large building,” Kumon said. “But you don’t have the overhead to spread that risk out over time. In many cases you have to do a zoning change, and every one I’ve seen is difficult. It draws a lot of the ire, that has very little to do with the actual housing, and more to do with ideas about the neighborhood or developers. So I’m trying to change the nature of the conversation, with small developers who are rooted in their own neighborhoods.” 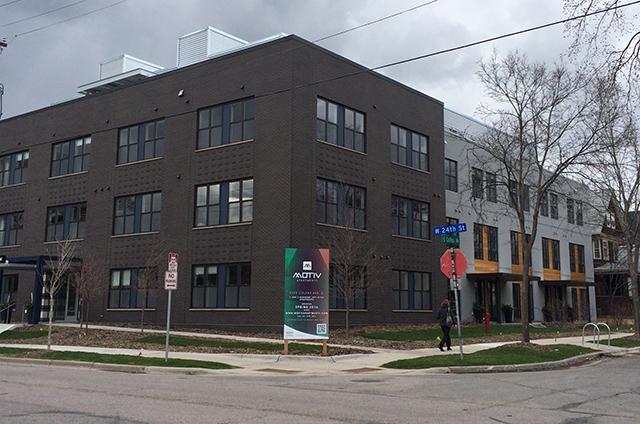 Photo by Julia Curran
The Motiv apartments on Colfax Ave., at the larger end of a “missing middle” development.

When she was elected in 2014, one of Mayor Hodges’ big goals was to increase Minneapolis’ population to 500,000 people, past its 1950 peak, and subsequent decades of decline. There are a lot of sound environmental and fiscal reasons for the ambition, but achieving the development goals remains a challenge.

“It’s important to do small infill, where you don’t have to tear up half a block to build something,” Magrino told me. “It leaves more diversity of housing types. On a given block you’re maybe going to have a 1930s apartment building, and then a six-unit newer building, and a couple of single-family homes and duplexes. It encourages natural affordability on the blocks, instead of tearing up half a block.”

The ironic thing about Magrino’s vision that it’s not fantasy. Blocks like this already exist in places like Kumon’s South Minneapolis neighborhood, which he describes as being full of diversity, even if many of the buildings don’t conform with the existing zoning code.

“I live at 36th Street, and right to my north there are many multifamily buildings,” Kumon told me. “On my own block there’s a duplex and quadplex, and SFHs. There’s a place for this kind of development in the city, and it used to naturally allow us to stay in the same neighborhood through different stages of life.”

Kumon’s first official Minneapolis IDA seminar, to be held this summer, has already sold out. If Minneapolis is going to actually reach its ambitious growth goals, he’d better get to work on planning more of them.