At first glance, the term “intentional community” seems odd. It seems to me that most communities are somehow unintentional, that unless you map out your social structures ahead of time you’re dropping some kind of ball.

But in a way, that’s exactly right. Most families and neighborhoods don’t involve much forethought; as most teenagers would attest, you can’t choose your parents. Intentional communities — a form of housing co-operative where residents form a household organized around an idea — have a long history in cities like Minneapolis. But thanks to the city’s longstanding “unrelated adult” ordinances, these unique households have often been forced to remain off the books, technically illegal but overlooked by trusting neighbors.

“I originally got into them through things like couch surfing,” Lisa told me this week, describing her discovery of intentional communities. “I briefly lived in one when working in a Grand Forks grocery co-op and community garden. [It’s just] a house where people could live together all these different ways.”

Today Lisa lives in one of Minneapolis’ many intentional communities. (Note: I’ve omitted Lisa’s last name in order to protect the whereabouts of her intentional community household, which technically exceeds the city’s “unrelated adult” restrictions.)

The legal status of intentional communities in Minneapolis depends on the context. Some, like the Students’ Co-operative on the University of Minnesota campus’ “frat row,” persist under antiquated zoning which allows for more residents. But most intentional communities in Minneapolis operate under the bureaucratic radar. It’s a tacit concept that doesn’t sit well with people like Lisa.

“My understanding of the law is that more than five unrelated folk can’t live together legally,” she said. “[Intentional communities] function because we don’t cause too much trouble, and people who live there know their City Council member or something. It has to function through people’s privilege, which is pretty messed up.”

Victorian morality and the nuclear family

“In our first zoning code in the 1920s, what they said about density was that dwelling units should be occupied by one family,” Robin Garwood, who is the council aide for Ward 2’s Cam Gordon, explained. “It didn’t really say anything more than that. It didn’t say what constituted a family, and didn’t have numerical limits. Later on, they adopted more stringent definitions.”

(According to Garwood, domestic servants remain an exception to the “unrelated adult” rule.)

As zoning developed in the early 20th century, evolving from limiting industrial activities into focusing on single-family living, limits on unrelated adults became part of a package. These rules worked together to foster early suburban single-family neighborhoods centered on home ownership and the nuclear family.

For cities, the historical focus on the family has had unintended consequences. As demographic trends have changed, there’s a mismatch today between housing, age, and family types. Twenty-first-century families are far more likely to be smaller (often much smaller!) than those of past generations. More and more people are eschewing families altogether, living alone or not having children. Meanwhile, the average home size grows ever larger.

“People don’t stay with their families until they’re married anymore,” said Rebecca Orrison, who lives in the Students’ Co-op at the university, and has been working with the Minneapolis Coalition for Intentional Communities. “They uproot and go off to college and live with their friends. It isn’t as much of a family environment. Part of what our culture gives us is this void of human connection. If you just live with two other people, maybe in a low-zoned area, you come home to an empty house. I’d much rather live with people around me to support me. It’s not just a young person thing.”

There are many types of intentional communities in Minneapolis, including Lisa’s example, which grows out of the co-op movements. There are vegan houses, grad student houses, international houses, houses focused on gardening, thrifting, or agriculture.

“Co-ops have been a big part of my life, very important to me for few reasons,” Devin Case-Ruchala told me. Case-Ruchala is on the board of a housing co-op and works managing loans for Shared Capital Co-Operative, a national co-op financing group.

“Just personally, they have been functional,” Case-Ruchala said. “They’re a good way to meet people, to get exposed to new ideas and connected with a community by the nature of where you live. They’re also more economical when living with people sharing all the expenses and sharing the chores of cooking and cleaning and all that stuff.”

(Given that intentional communities are often governed by consensus, I can only imagine how carefully and thoughtfully these meetings must have proceeded. As with Quakers, listening skills are highly valued within the intentional community social landscape.)

The proposed ordinance would allow intentional communities to register with the city, and allow them to bypass the unrelated-adults rules. 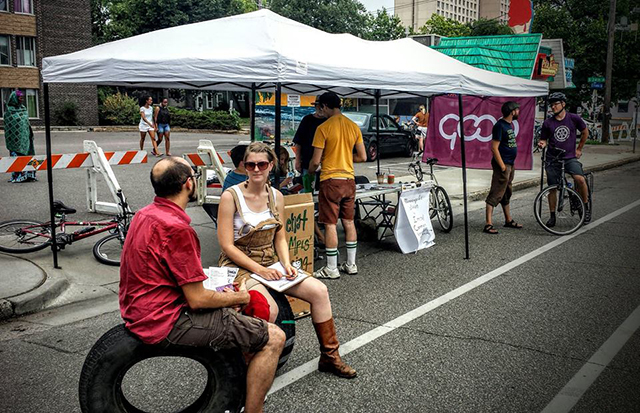 “We define intentional community in a fair amount of detail,” Robin Garwood, the City Council aide, explained. “They would register with the city. The zoning code max occupancy would not apply to the unit. Instead the building and housing code occupancy based on the size of the structure and fire safety would apply. If you have a house that would safely accommodate five people, you could live in that house, rather than the three people under the existing code.”

Other provisions involve limiting intentional community registration to one per landlord (or property owner), and making the certificate revocable depending on noise or nuisance complaints. According to Garwood, the coalition has received pushback from both sides. Pro-density urbanists argue that maximum-occupancy requirements should be dispensed with altogether, while people who value low-density neighborhood remain worried about things like increased noise, traffic and parking. There is a meeting tonight (Tuesday, May 31)  at the Minneapolis Central Library (7:30 – 8:30) to discuss the issue publicly for the first time.

When I moved back to St. Paul from New York, just a few years out of college, I found myself working as a temp and living in my mom’s basement. Needless to say, it wasn’t ideal, but given my very limited means, it was the best I could do. That is, until a friend of mine offered me a room in her “student house” in the Grand Avenue neighborhood. The very small room was $250 a month, and I’d be living with five other people in a lovely house in the heart of St. Paul. It was the perfect situation for me at the time, and I still fondly look back on those years filled with collegiality and an improvisatory social life. The memories make me wonder: Why shouldn’t more people be able share homes, and live cheaply among friends?

“Right now intentional communities are not able to talk or promote themselves,” Devin Case-Ruchala said. “If they’re able to become legal by changing the ordinance to allow more than three unrelated people to live together, and call themselves an intentional community … . Once we’re able to do that, I will be able to find them, and for my own personal purposes, and from a policy standpoint, that’s meeting a need that’s already out there.”

Given how influential Minneapolis’ environmental and social justice cultures have been, many of which were formed in intentional communities, it would be nice if they could find their way out of the bureaucratic shadows.