Walking through St. Anthony’s Lowry Grove RV Park offers an odd feeling. Dozens of children run around in tight groups, with occasional cars crawling in and out, and a wide variety of small homes sitting pressed closely together. There’s a palpable sense of intimacy, as a lot of the park’s activity occurs outside on porches or patios or in gardens. Located along transit lines, the park offers a rare mix of affordability, good education and quality of life.

Yet even as the small city of St. Anthony becomes a poster child for racial tension, a lawsuit is pending that will decide whether the park and its hundreds of residents, most people of color, will be displaced from their homes. If that happens, it will be a step backward for redressing residential segregation and racial equity in the Twin Cities.

The geography of mobile homes

The Lowry Grove community is a 15-acre manufactured home community in the southern tip of the suburban city of St. Anthony, just across busy Stinson Parkway from northeast Minneapolis. Wedged between a busy street and a leafy parkway, the park’s slapdash streets are lined with mobile homes of every variety.

“We have probably 95 families in Lowry Grove,” Antonia Alvarez told me in a recent interview with KFAI radio. “We have children. Everybody are not rich people; it’s poor people.”

Compared to other types of affordable housing, such as the Crossroads apartments in Richfield that I wrote about back in February, manufactured homes have important differences. While individual residents own the homes themselves, they do not own the land below. And while the homes are theoretically “mobile,” the rule of thumb is that they plant themselves permanently after about 20 years. Many homes in Lowry Grove, like Alvarez’s, are over 40 years old. 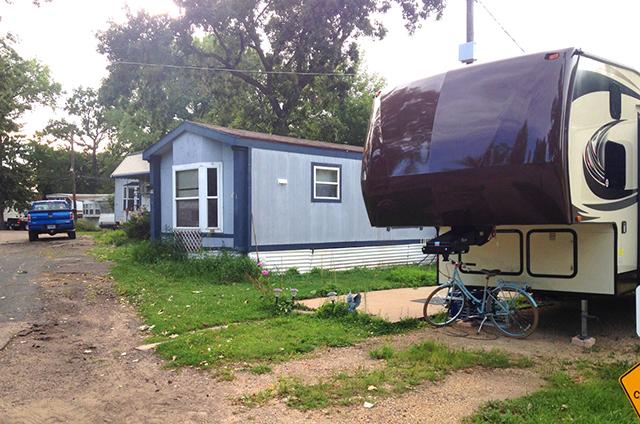 MinnPost photo by Bill Lindeke
While the homes are theoretically “mobile,” the rule of thumb is that they plant themselves permanently after about 20 years.

“The history of manufactured home parks goes back to World War II, when we were looking to build housing for veterans,” Ned Moore, a program director at the University of Minnesota’s Center for Urban and Regional Affairs, told me. Moore has spent years advocating for manufactured home communities across the Twin Cities and throughout the state. For the record, there are about 13,500 manufactured homes in the metro, and 50,000 in Greater Minnesota.

“At the time people were looking for places where land was cheap, and this was before a lot of suburban expansion,” Moore explained. “So they were located along major highways on the outskirts of cities, which are of course now fully developed suburbs.”

Lowry Grove offers a textbook example, sitting on the Minneapolis border in what was then a greenfield area, half industrial and half small single-family homes. But as urban growth in the core city has intensified, as in Richfield, these properties have become more valuable, offering appealing sites for redevelopment.

“A lot of parklords simply see these neighborhoods as investments to purchase and hold on to as long as they can,” Moore said, “raising rents, putting nothing back into the infrastructure, with the goal of eventually selling it and cashing it on displacement of hundreds or thousands of people.”

The lawsuit and debate

About a year ago, the long-time owner of Lowry Grove decided to sell the park to a Wayzata-based developer. The selling price was $6 million, and if the sale goes through, within a year or two the park will look like the higher-income multistory apartment buildings that sit right across the street. But there’s a catch.

A pair of laws that date back to the late 1980s grant manufactured home communities in Minnesota social protections intended to offer an alternative from displacement. In theory, residents are allowed to match the selling price and purchase the land for themselves.

The problem of disinvestment is another story. Particularly in a tight rental market, property owners in many parks have little incentive to spend money. The only long-term solution for manufactured homes is to gain some measure of local control, such as forming a separate municipality or having a stake in ownership. The Twin Cities’ small municipalities of Hilltop and Landfall, both entirely made up of manufactured housing, offer the best-case scenarios. But there are many other ways for manufactured home residents to gain their rights, such as through co-ops or land trusts. 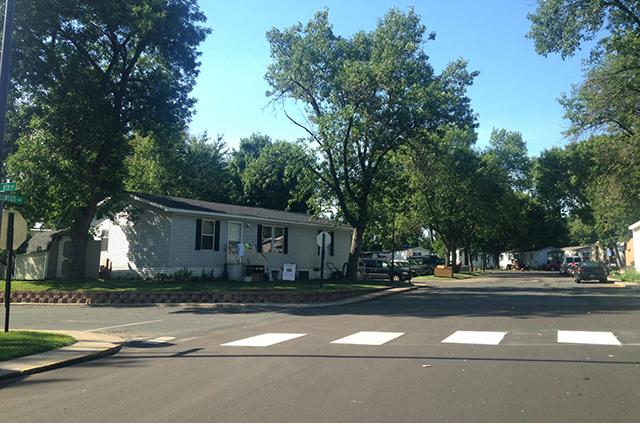 MinnPost photo by Bill Lindeke
The Twin Cities’ small municipality of Landfall, entirely made up of manufactured housing, offers a best-case scenario.

“Manufactured home parks own their homes but rent the land,” Ned Moore explained. “It presents a unique opportunity as it relates to affordability, but due to the underlying dynamic, homeowner and renter at the same time, it’s also a situation where there’s a fundamental power imbalance ripe for abuse.”

The fate of Lowry Grove has special resonance because the past year has been one of cognitive dissonance between two contrasting narratives of the Twin Cities: One story describes a “miracle” of affordability and opportunity, the other, a bastion of structural racism. To me, the irreconcilability of these two stories points to the region’s fragmented geography, where some areas offer high-quality jobs and schools while others are left behind.

“If the residents of Lowry Grove were to be pushed out, St. Anthony would lose about one-third of its Latino population,” Owen Duckworth, a coalition organizer for the Alliance for Metropolitan Stability, told me. “Lowry Grove is around 70 percent Latino at this point, and it’s a significant loss of affordable housing and people of color in that community. Certainly that shouldn’t be viewed in the city as a good look, at this moment in time.”

Institute on Metropolitan Opportunity
The maps above show the concentration of people of color as a percentage of the overall population.

To me St. Anthony (also known as St. Anthony Village) offers a case study of the Twin Cities disconnect. It’s a typical 1950s edge city, cemeteries and golf courses in equal measure, small aging middle-class homes laid out along grids of residential streets, leafy parkways, or wide concrete roads pouring cars from the city. First-ring suburbs like St. Anthony sit on the front lines of the region’s racial gap between the increasingly diverse core-city neighborhoods and the overwhelmingly white and wealthy second-ring suburbs.

Neighboring cities like Shoreview, New Brighton, Roseville, and Fridley offer similar challenges, where postwar affordable housing, most of it privately owned, is rapidly aging. Moore points to other examples of manufactured home parks closing in suburban cities, like Shady Lane in Bloomington and Saint Paul Cabins in Maplewood. 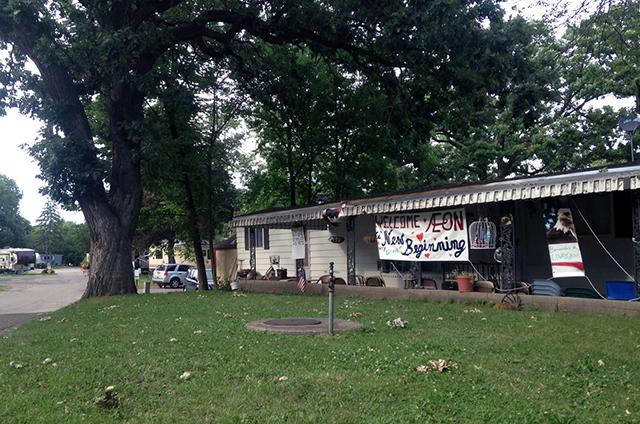 MinnPost photo by Bill Lindeke
According to Aeon’s Alan Arthur, a successful lawsuit is the only way to save the park.

“When you look at who’s being displaced by development projects, well over half are people of color,” he said. “When looking at justice and what it means for folks in manufactured home parks trying to protect their rights, we need to employ a racial-equity lens to ensure that people’s rights are protected.”

According to Aeon’s Alan Arthur, a successful lawsuit is the only way to save the park. If the legal challenge fails, park residents will have to move their homes within nine months or they will be demolished.

“This is my home and we want to stay in this land because we won’t have choices,” Antonia Alvarez said. “We want to protect the manufactured home park because in Minneapolis, there’s a lot of difficulty for residents in apartments. I am praying and we continue to fight for the community and continue to fight to save Lowry Grove.”

A lawsuit in St. Anthony: The fight to save Lowry Grove