Walking around this summer, I’ve been trying to notice fountains. Not drinking fountains, mind you, but sculptural public fountains — the kind that pump and toss water into the air to gravitate downward in a thousand never-repeating ways. Watching people enjoy and relate to fountains (or not), patterns emerge, and the historical stories behind some fountains are surprising. It’s safe to say that fountains have played different roles in our public life over time, though the basic theory of falling water seems to have run uninterrupted for centuries. Here are some Twin Cities highlights.

Comparing the cities, St. Paul generally has more working downtown fountains, or at the very least, ones that I find more interesting. The small plazas of downtown Minneapolis seem empty by comparison; there most fountains can be found in the parks.

Perhaps the strangest story of all the Minneapolis fountains belongs to Loring Park’s Berger Fountain (aka the “dandelion fountain.”) It was created and donated by a parks commissioner named Benjamin Berger, and today, this is the fountain most likely to be given the “people’s choice” award for fountain popularity. As Minneapolis parks historian Dave Smith explained, Berger owned a chain of movie theaters and was president of the then-local Minneapolis Lakers basketball team. 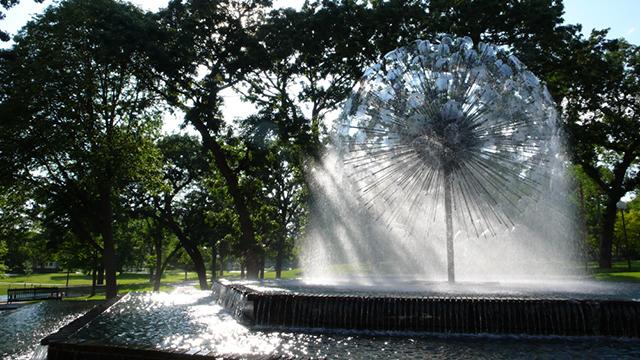 “Berger saw a dandelion-style fountain in Melbourne, Australia, and wanted to have it duplicated for Minneapolis,” Smith told me this week. Smith goes into detail on the fountain’s provenance in his book on Minneapolis park history, but the most interesting tidbit concerns the source of the fountain’s nest egg.

“Recreating the fountain turned out to be much more expensive than Berger had planned,” Smith said. “But he had a windfall at his movie theaters. He got stuck with screening ‘The Exorcist’ [in 1973]. No one else wanted the movie, and he got stuck with it. But it ended up being wildly successful, and Berger did well off it. He said he sold enough popcorn for that movie that he had enough money to pay for the fountain.”

Next time you’re walking through Loring Park, try squinting to see if you can identify ghosts of Linda Blair and “The Exorcist” (one of my favorite films!) inside the fountain mist.

The other anecdote about the water flower is that Berger originally intended the fountain to have a home in the then-nascent Walker Art Center sculpture garden. But the Walker rejected the proposal because it was a copy, and not an original artwork.

The one that moved: the turtle fountain

Lake Harriet is home to a pair of fascinating fountains. The most famous is probably the “turtle fountain,” located by the Lyndale Park Rose Garden and site of countless wedding photos. The fountain is one of the last remnants of downtown’s old Gateway Park, demolished for urban renewal in the late 1950s and early ’60s.

“The turtle fountain used to be in the Gateway,” Smith explained. “It was completed there in 1915, the gift of park Commissioner Edmund Phelps. It remained there when the Gateway Park building was demolished in the ’50s — until the ’60s, when the neighborhood was destroyed.”

The story of the Gateway District is well known, but people don’t often realize that the remnants of the park — the fountain and the flagpole — date to an earlier renewal period, where the park was redesigned and remade along City Beautiful-era aesthetic lines. The fountain was dismantled and moved to Lake Harriet after that.

The oldest: the Heffelfinger fountain

The other famous Harriet fountain is called the Heffelfinger fountain, named after a different parks commissioner (much earlier than Berger). Today it’s technically the oldest fountain in the park system because it was moved to Minneapolis from Italy.

“It’s an ornate Italian fountain which Heffelfinger saw when he was touring Italy in the 1920s,” Dave Smith said. “He liked it so much he bought it. But he didn’t know what to do with it, so it stayed in storage until after World War II, then it was reassembled at Lyndale.”

Today the fountain is in need of some restoration, and Smith told me that there’s an ad hoc group working on raising funds. 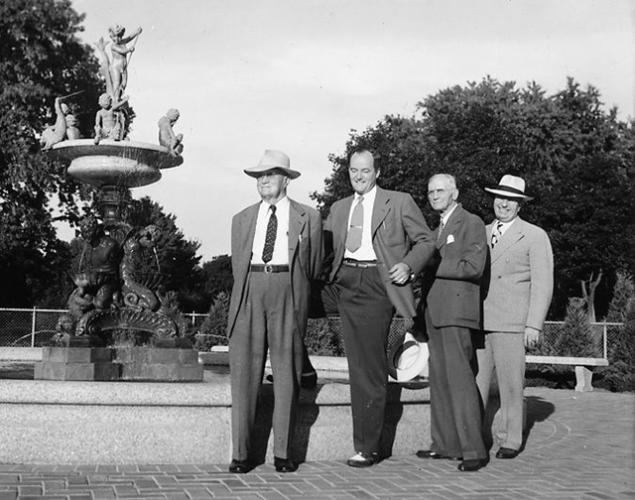 Courtesy of Dave Smith
The dedication of the Heffelfinger fountain off Lake Harriet in 1947.

St. Paul has its own fountain-centric wedding photography hot spot, just west of downtown in the middle of the last remaining proper Victorian park in the Twin Cities. Back in the late 19th century, a handful of similar parks existed outside the downtowns of both Minneapolis and St. Paul, most with large Victorian fountains. For example, a Twin Cities flaneur would have discovered ornate fountains in Elliot Park and Logan Parks in Minneapolis, or Central and Lafayette Parks in St. Paul. All of those fountains, and both St. Paul parks, have been lost to history.

The Lafayette Park fountain, in particular, has an odd story to tell. The park itself dated back to the 1886, the brainchild of historical luminaries like Henry Sibley and Amherst Wilder. But as railroad frequency and intensity grew during the late 19th-century boom days, Lafayette Park lost its luster, and the old mansions began to fall victim to entropy. Eventually the park itself was fragmented for industrial land uses, and the fountain disappeared sometime around World War I. The last remnant of the fountain is an old maintenance tunnel beneath the parking lot outside what is now State of Minnesota government offices. 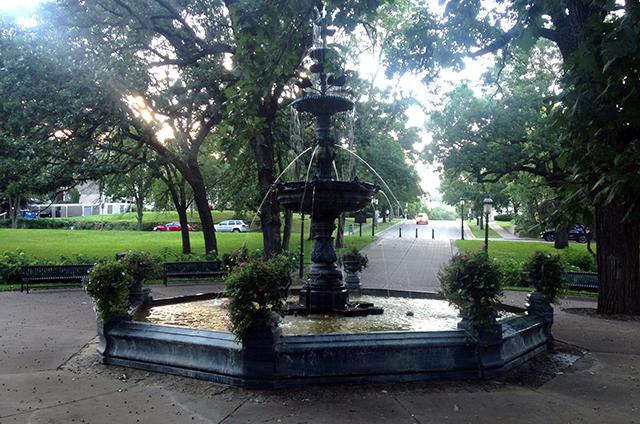 Thanks to early St. Paul preservationists, Irvine Park was spared Lafeyette’s fate. The park itself was restored, and a reproduction fountain was installed back into the center of the square in the 1970s. Today, the fountain creates a striking focal point, rising 20 feet up in the air and filling the small park with passive activity. Fountains change the atmosphere of their urban environments, providing movement and a feeling of vitality. The soothing sounds of falling water create a relaxing bubble of sound that drowns out the car noise that has become ubiquitous in our cities. With all the ornate porches and reproduced history, the large square park-proximate neighborhood is a highlight of any Twin Cities history and architecture tour.

The art of fountain maintenance

Fountains become neglected because of their complexity, and today parks crews have to keep an almost daily eye on fountain operation.

“Almost 90 percent of the fountains, we check on daily basis,” Tom Hagel, parks maintenance supervisor for St. Paul Parks, told me. “We’re checking pumps and motors to make sure everything’s on.”

The fountain maintenance beat also involves some seasonal care, making sure the fountains survive freeze-thaw cycles and long winters. Hagel’s favorite fountains in the system include the Shiffman fountain (an often ignored fountain in Como Park) and the Cochran fountain (featuring a sculpture of a boy and his dog). 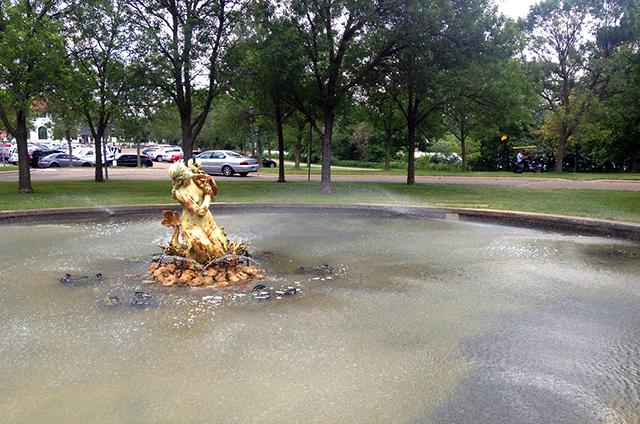 “Depending on the location, the work involves getting the pieces in place, the seasonal pieces removed from the fall,” Hagel explained. “Some have antifreeze-type material in the piping, and get drained down and covered for the year so they don’t get vandalized and stolen. There’s trade staff: carpenters removing the covers, plumbers putting the features back together, and electricians checking pumps and motors for power. Then our staff cleans the fountains from debris accumulated from the season.”

The missing matter of fountain play

One final note involves interactivity. Many fountains are meant be enjoyed in a strictly passive way, as a visual and acoustic marvel. But when you talk to people about fountains, the issue of playing and splashing quickly arises. Understandably, kids love walking the thin line between wet and dry, and invariable scamper around fountains in the summertime. With older fountains that kind of play is usually prohibited, but some more modern fountains seem to welcome curious kids. 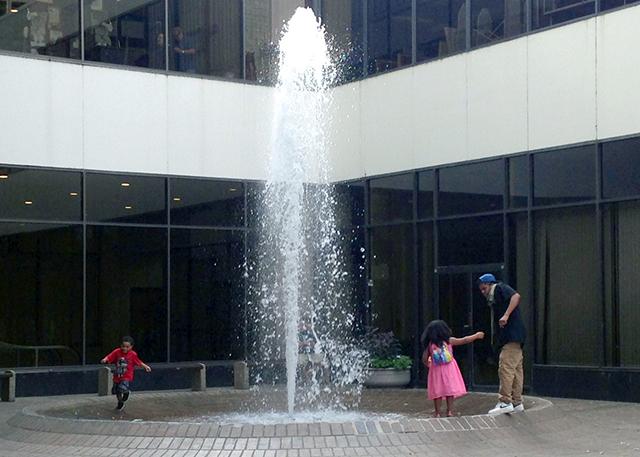 The new “fountains” in the Commons, the brand new public/private park next to the Vikings stadium, points to one possible future of the fountain. They’re a hybrid fountain and splash pad, with a little foot-pedal that activates the ground-level sprinklers for proper thigh-high lubrication.

Of course, fountains always look nice when they’re brand new. It remains to be seen what today’s sparkling gushers will look like when the maintenance bill arrives.

Distinctive Twin Cities fountains and the art of fountain maintenance