Sometimes zoning is like a puzzle, a game that buildings seem to play by fitting together detailed pieces. For example, a little tool called the “floor area ratio” (FAR) can often be a great shorthand measure for urban design.

“If you have an acre site and the max FAR is 1,” said Nick Magrino, explaining the basic concept, “you could have a one-story building that took up the whole site, or you could have one that takes up half the site but is 2 stories, or ¼ the site and 4 stories tall.”

The floor area ratio is one of those little tools that get put into the zoning code mix, generally employing a mix of maximums and minimums to ensure a proper “goldilocks size” and to shape building design. And as two recent examples from St. Paul and Minneapolis show, FAR might be becoming a more useful tool in the future as cities look to double down on old-school urban density.

Calculating a FAR is pretty simple. Technically, it’s the ratio of total building square footage to the the surface area of the lot; but another way of thinking about it is the number of stories divided by the amount of surface parking. For the most part, older multistory buildings have higher FARs, simply because in the pre-automobile age, space was at a premium. Meanwhile, postwar auto-oriented developments, like strip malls or big-box stores, almost always have ratios much less than 1.0. Parking lots, grassy setbacks, and drive-thru lanes take up a lot of space when you sum it up.

St. Paul’s University Avenue is a great modern-day testing ground for different approaches to building design, and examining the FARs along the street brings out a chiaroscuro contrast. (For example, Midway Books, the bookstore on the northeast corner of Snelling and University, has a FAR of 2.86, while the Target down the street has a FAR of only 0.37.) For many in the neighborhood, the light rail line has made the old low-FAR approach obsolete. 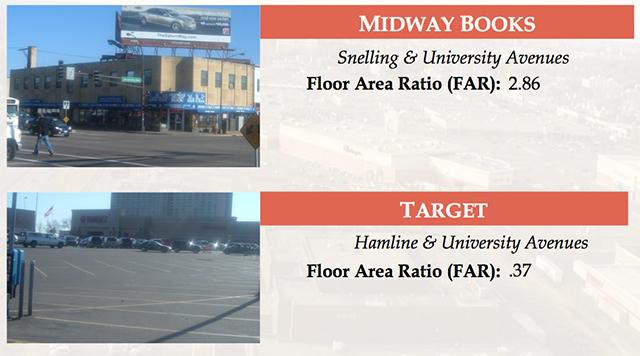 Courtesy of the City of St. Paul
FAR comparisons along Univeristy Ave.

“We let them put in a drive-thru knowing the train was coming,” said Renee Spillum, a Midway resident and commercial development planner, describing the University Avenue Culver’s, now a few years old. “It’s not going to go away because it’s super profitable. What can we do to stop expediency from keeping us from doing the right thing when it comes along?”

One answer might be a greater focus on regulating the FAR for new buildings. As a member of the Community Advisory Committee that helped plan the Snelling-University soccer stadium site, Spillum pushed to raise the FAR bar for the area. At stake is the density and shape of the surrounding development, the land along Snelling and University Avenues that will someday surround the stadium.

“FAR is a tool the city could be using to ensure we have high density on the site, Spillum said. “With the transit amenities nearby, FAR minimums are a tool we should be looking at for master planning the stadium site. Each individual parcel should have to meet a higher standard than 1.0. A one-story building with a surface parking lot on one half of the parcel is terrible for that site.” 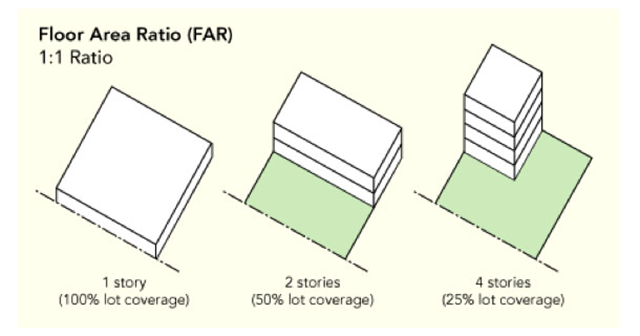 Courtesy of the City of St. Paul
How FAR is calculated.

During its deliberation, the committee debated higher FARs around the edges of the site, with one suggestion to up the minimums to around 4.0. But after some pushback from the current property owner, staff and the City Council settled at a FAR of 2.0 (i.e. an average of a two-story building).

St. Paul’s addiction to drive-thru fast food isn’t the only thing that has prompted planners to take a closer look at ratio requirements. A string of low-density (<1.0 FAR) buildings in Minneapolis has been on Planning Commissioner Nick Magrino’s mind lately. He wants to see the city make more use of FAR minimums to shape developments like the recently approved Holiday gas station on Northeast Central Avenue.

“We’ve seen a lot of lackluster proposals,” Magrino said. “We keep talking about it the White Castle, the Holiday, the Walgreens, the Wells Fargo bank. … There’s nothing we can do about this because it’s all allowed by zoning. If we had a FAR minimums, we could be demanding better development.”

Minimums are one thing; FAR maximums are another. Despite being a fan of urban density, Magrino recently voted against granting a variance for a proposed 40-story apartment tower on the site of a northeast Minneapolis funeral home, just across the river from downtown. For Magrino, even though he supported the project, the idea that such a large variance was even required in the first place didn’t sit well.

“The 600 percent increase is kind of a lot,” Magrino said during the Commission meeting earlier this month. “It really calls into question the whole point of having a zoning code. If people want these kinds of projects to get built, we should work on reforming our zoning code.”

(The variance passed the Planning Commission anyway, and the building is currently on track to proceed.)

For her part, Spillum, who has a background in urban policy, feels that maximums are a good way for cities to give large projects a bit of extra attention.

“When you want to push something really big, it’s worth having some scrutiny, as long as they are on a path to allowing variances,” Spillum said. “Anything you allow by right, nobody has to ask permission to build. That to me is the point of zoning: Anything within these parameters is acceptable, but anything outside of them, we’re not saying ‘absolutely not,’ only that they have to come in and talk to us about it.”

The difference in perspective stems from the relationship between variances and regulations.

“Some really good service journalism would be explaining that a required ‘conditional use permit’ for height is not a height limit,” Magrino said.

In other words, the “limits” in the code aren’t really limits, but thresholds that trigger different levels of attention from cities and planners. But as the northeast tower project reveals, the relationship between guidelines and exceptions around FAR can sometimes become dramatically imbalanced.

“We’re working on the comp plan right now,” Magrino said. ”I’m optimistic we’ll get slightly more progressive regulations, but at the moment our hands are tied. Sitting up there, people can look at a project and say ‘this is ridiculous,’ but we don’t have a way to deny them legally.”

St. Paul, too, is putting its comprehensive plan together, and looking for ways to ensure urban density. FAR might offer a useful tool for better shaping development along University Avenue and other transit corridors. If it works, the future might look more like the past, chock full of two-story buildings.