Next year, St. Paul’s three Carnegie libraries will be 100 years old. I used to think they were all identical, which only points to how unobservant I can sometimes be, but in fact, each of the three buildings had subtle architectural differences, contrasting cornices or particular pediments. And for 100 years, each of the three libraries served neighborhoods on the far corners of the city, welcoming generations of curiosity seekers.

But that was then, and today, each building has diverged from its original footprint in surprising ways. As library needs have changed over the years, the three Carnegie buildings now have unique fates that reflect the diversity of the city around them.

The Riverview Library on the west side bluffs

Of the three buildings, the Riverview Library on the west side (its poetic address: 1 East George Street) is the least changed. When it first opened in 1917, the west side was famous for the large working-class immigrant community down on the river flats. Back then, as city planning documents point out, like many of the west side’s social institutions, the library was explicitly designed to serve and educate these immigrant groups. And 100 years later, the building is largely unchanged. If you walk through the doors today, you’ll still see a wide cross-section of the neighborhood browsing books and movies, charging phones, and using the computers in the main room.

“The thing that’s interesting about this library in particular is that lots of folks that come in grew up on the west side,” Kali Freeman, the library manager for the Riverview branch, told me. “Coming back with their kids, it all looks exactly the same. The kids’ section is still in the same place. Storytime happens in the same place. There’s a lot of familiarity, and it’s been quite comforting to them.” 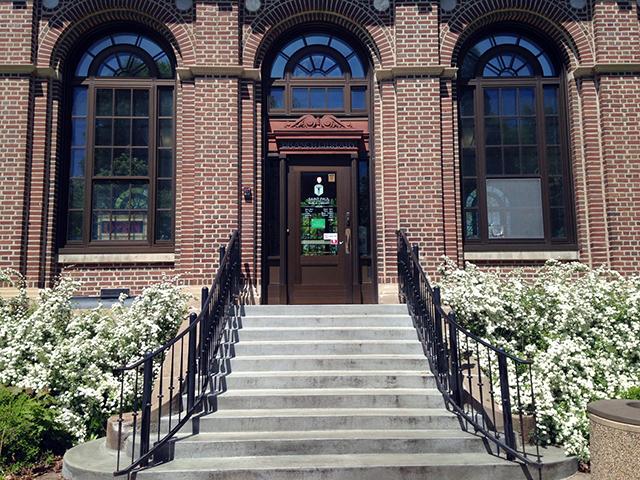 Though not identical, each of the Carnegie library buildings began with the same cozy footprint: one large rectangular room with tall ceilings and massive arched windows. The front library desk was placed directly in the center of the building, and on either side a wing surrounded by books hosted a few tables and chairs. Below the foyer, a staircase descended to the bathrooms, some offices, and an auditorium used for events.

With the exception of an elevator, added to comply with the Americans With Disabilities Act, the Riverview building is mostly unchanged. But, as with any piece of architecture, the building’s tight footprint comes with both pros and cons.

“The coolest thing about the building is that certain something about the one-room library concept where everything is within reach,” Freeman said. “Everything is visible; it just seems accessible to all. But the drawback is that there is always a need for more space. We want more space for our community to meet, more space for our kids to be a little bit louder so that they’re not bothering folks on the computers.”

(Indeed, the Riverview Library is only two blocks from my house, and I sometimes go there to work on my MinnPost columns. But there’s only one table with an electrical outlet, and I often find myself sharing it with bored teenagers, while a local octogenarian reads the paper in a chair behind me and a row of middle school kids play Minecraft on the computers 10 feet in the other direction. The scene is a microcosm of the neighborhood.)

From the beginning, the St. Anthony Park branch, on Como Avenue in the northwest corner of the city, was very different from its west side twin. The neighborhood around it, originally a 19th-century bourgeois suburb, had long been wealthier than other parts of the city, and from the beginning the St. Anthony Park building was designed to be fancier, more elaborate. For example, check out the elaborate crown molding along the interior ceiling, or the capitals on the exterior pillars; both are rich in detail and symbolic craft.

“The windows are amazing; when it’s sunny, it’s light-filled and just a wonderful building,” Tracy Baumann, the St. Anthony library manager, told me. Baumann is one of the rare city librarians who has worked in all three of the St. Paul Carnegie buildings, and has a keen eye for the differences among them. For example, she pointed out differences between the ceilings, and the different locations of the front desks. 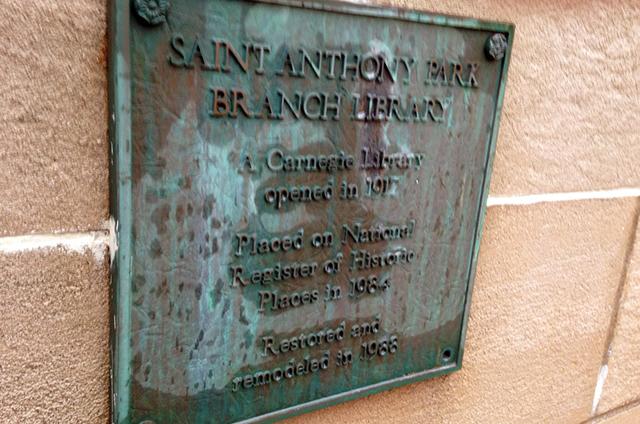 “That’s how I felt at both of the other libraries too,” Baumann continued. “Especially in the winter when it’s cold outside — that sun coming through these huge windows. But the St. Anthony Park building is very different. When they started out, the interiors were almost the same, while the exteriors were similar, though this building is a lot fancier.”

Trying to fix the small footprint and architecture limitations is a common problem for each of the over 1,600 original Carnegie libraries around the country, but the St. Anthony building has been luckier than most. For well over 50 years, a local group named the St. Anthony Park Library Association has been raising money to improve the building, a testament to the tight-knit neighborhood.

Over the years, the building has been remodeled multiple times, and when the elevator was installed in the late 1980s, the city, with help from the association, built a large expansion that doubled the amount of usable space in the building. Much of the new room was intended for kids.

“Since the 30s, the association has been the active force behind all of this,” Baumann said. “Recently they’ve had a focus of adding the children’s area. It used to be a very small section, and we were always looking to think about where we could put children’s materials.”

At first glance, though today’s version of the library might look similar to the other two in St. Paul, the layout is very different. The main desk is off to the side, and during the thrice-weekly children’s story time, over 60 kids typically crowd into the auditorium to hear tales told in multiple languages.

Creative re-use on the east side

Peter Rachleff first learned about the possibility of using the old Carnegie building at the dog park when his state legislator, Tim Mahoney, mentioned the possibility while watching their dogs, Orso and Luke, run around together. A year or so ago, facing the same spatial limitations as the other Carnegie buildings, the city decided to build a brand new library on Payne Avenue, abandoning the old building a block away on Greenbrier. That meant that the building would be vacant, and perfect for Rachleff’s lifelong dream of creating a library and community center devoted to labor history.

Today the building is filled with Rachleff’s old books and countless other things. (You should read my MinnPost colleague Andy Sturdevant’s column about the library and the old building.) 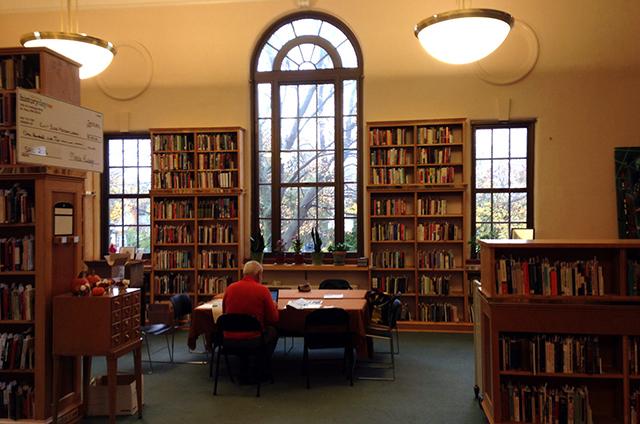 MinnPost photo by Bill Lindeke
Inside the East Side Freedom Library

“We see history and culture as a way to build bridges between the silos that most of the people here live in,” Peter Rachleff told me the other day as we sat beneath the library’s large windows. On the surface, the building looks a lot like the Riverview, except that the books are all about unions, immigrants, and the history of class struggle in Minnesota. In the far corner, past the painted cutouts of working people, sits the world’s largest archive of Hmong history, including a big collection of “story cloths.”

Rachleff’s organization, The East Side Freedom Library, is a nonprofit currently supported by grants. It has signed a 15-year lease from the city, and is responsible for maintaining the century-old building. They have already replaced the roof, and he is thinking about what to do about the loud HVAC system. But quirks aside, Rachleff believes the building’s antiquated architecture complements the Library’s unusual mission. 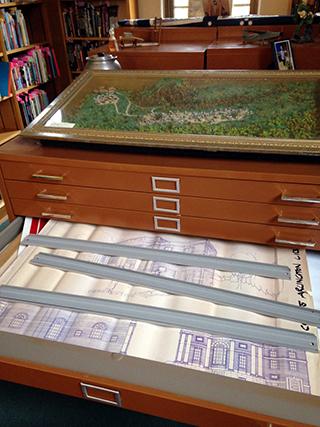 MinnPost photo by Bill Lindeke
East Side even has a copy of its own plans.

“We want to claim the legacy of this building in the neighborhood and then reinvent its use,” Rachleff told me. “The natural light is fabulous, and it really exudes a kind of openness. We have been amazed at the willingness of people to have difficult conversations here, conversations about the ethnic cleansing of the Dakota people, conversations about Jamar Clark and Philando Castile and racism, discussions about the pope’s encyclical about climate change. People don’t necessarily walk out on the same page, but given the veneer of Minnesota nice it’s been pretty interesting to us that people are willing to come here and be uncomfortable, and I think the architecture is connected to that.”

To me, the unusual fate of the east side building reveals how deeply ideas about information, community, and architecture have shifted in the century since Carnegie originally built the buildings. Originally, libraries had a rarified air that reflected a kind of purity, and they were often intended to be used by adults. Today, libraries have become much more democratized, multifaceted, and younger. And the divergent fates of St. Paul’s original three buildings show how complex and rich the idea of a library can become.