I won’t be able to write this article without including my favorite bicycle pun, so I might as well get it over with.

OK, so there’s a new bikeway in downtown St. Paul! Keen observers of the downtown landscape will have noticed summertime construction on Jackson Street, one block East of Robert.

On Thursday the city released the plans, name, and logo for newly christened Capital City Bikeway, and now you can ride a bicycle on the newly paved asphalt to your heart’s content. (Note that is capital with an ‘A’.)

Though it doesn’t get you very far right now, the bikeway lays out an ambitious vision for downtown streets, where if you use your rose-colored imagination, it’s possible to glimpse a streetscape revolution. The new bikeway’s innovative features make it the first Dutch-style urban trail in the state, or maybe the country — and reveal a future where downtown St. Paul might transform from an unbikeable barrier into a hub of trails from all corners of the city.

Not your usual bike lane

One frustration for beginning bicyclists is that bike infrastructure comes in all shapes and sizes. As bicycling has evolved in U.S. cities, there has been a lack of consensus about what kinds of designs meet the needs of the most people. Should you build bike lanes, side paths, bike boulevards, separated lanes, or all of the above? (There’s even a school of bicycling that has long advocated for building nothing at all; all you need is training and the right attitude.)

The Jackson segment of the Capital City Bikeway, which will be completed next year, puts a new option on the table. More than anything it looks most like the kind of curb-separated side path you might see in Copenhagen, which would be a new idea for an American city. (Minneapolis’ upcoming Washington Avenue project might resemble this treatment, or the extensive downtown bike trail in Indianapolis.)

Full disclosure: I served on the Citizens Advisory Committee that helped to shape the plans, designs, and route of the bikeway. (I also wrote my doctoral dissertation on bike planning … so you’re probably lucky this article is as short as it is!)

“The planning tries to do two things: to create better spaces in downtown, and to overcome some barriers that keep people from getting into and out of downtown on a bike,” explained Reuben Collins, an engineer in the city’s Public Works Department.

The sticky wicket for bike planning has always been figuring out a way to build separated lanes in urban areas. Preference surveys suggest most riders prefer  “sidepath” style bike trails like the ones you might see along both sides of the Mississippi River. But separated trails are difficult in complex urban places, and most planners reserve these more expensive designs for routes with few intersections, such as next to parks or water.

But bringing a bike-trail-like design into a downtown puts St. Paul on the cutting edge of bike planning for once.

“The biggest difference that people will see is that this is essentially a trail in a downtown setting,” said Reuben Collins. “There aren’t really any examples of that in the metro or even nationwide. Typically in downtowns you’re more likely to see on-street bike lanes or protected lanes with flexible bollards. But this is one of the first elevated two-way protected trails through a downtown.”

In bike planning, the devil is in the details. And the Capital City Bikeway takes the time to focus on things like way-finding and intersection treatment.

Formerly, Jackson Street had two lanes of one-way through traffic with two lanes of on-street parking. The new design takes half of the parking and turns it into a curb-protected bike lane, adding in landscaping, signage, a new logo, and bicycle-specific signals at intersections. Planners are careful to emphasize that the bikeway isn’t just about bicycles, but is aimed at improving the sidewalk for everyone.

“The entire design of Jackson is more of a placemaking effort than an effort to simply move bikes,” Collins explained. “A lot of effort went into the aesthetics of the corridor and to capture a different crowd of bicyclists than you might find in bike lanes.”

First part of a yet unfunded plan

First, the bad news. This week’s opening ceremony celebration is only for a small part of the future bikeway, the stretch from the Mississippi River and the Sam Morgan Trail up to 7th Place. (The rest of the North-South Jackson connection will be built next construction season, reaching University Avenue and the start of the regional Gateway Trail that runs all the way to Stillwater.) 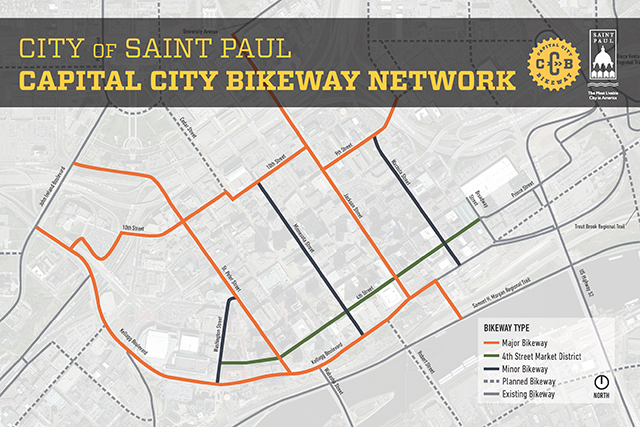 Courtesy of the City of St. Paul
Planned bike routes

The city was able to accomplish this dramatic reconfiguration because Jackson Street was slated for an already-expensive reconstruction, where even the curbs and sidewalks were being rebuilt. (During the construction a lot of other work took place as well, such as replacing century-old sewers and other below-ground utilities.)

“The idea for the bikeway came up in a couple of different places,”  Mayor Chris Coleman told me this week. “There was our work around street vitality, the 8-80 plan that put $27 million into a fund to create more walkable, bikeable spaces on our streets. And we did a lot of work putting together the St. Paul bicycle plan that has been long time coming, looking at a holistic citywide bike network that navigates through downtown.”

The Jackson Street project was expensive, eating up a huge part of the dedicated 8-80 funding. But it’s a mistake to think that the bikeway was the big driver of costs; according to the city, the street had to be reconstructed anyway, and designing the pavement and concrete with a different audience in mind was relatively easy to do once the street was already torn up.

In the meantime, the rest of the plan is in search of funding.

“This segment will be completed in next year, in 2017,” Coleman explained. “And then obviously these plans require identifying resources and building the system out as quickly as we can.”

Part of the plan released this week includes some interim treatments that might make some bike connections while St. Paul searches for street reconstruction money. These might include swapping parking for bollard-protected lanes, or restriping a few street connections, urban bike hacks that are a priority for the city’s bicycling advocates.

“I’m looking forward to the bikeway,” said Mike Sonn, co-chair of the St. Paul bicycle Coalition, who worked hard to push for the adoption of the citywide bike plan last year. “Once completed, I foresee a lot of demand for the extension and completion of the full loop. I hope the city is ready to expedite a temporary protected loop as it gathers funding to permanently complete it.”

(Personally, I’m enthusiastic about the potential to double the size of the bikeway with the proposal to turn Fourth Street into an east-west bike/ped street, as early as next year. Similarly, the interim treatment proposal for 10th Street would offer an invaluable connection to get bicyclists safely to and from Summit Avenue.)

Compared to mostly flat Minneapolis, bicycling in St. Paul poses some obvious topographical challenges. It doesn’t really matter which direction you are coming from — east, west, north and south — bicyclists have to negotiate some kind of hill, and some of them can be quite hefty! 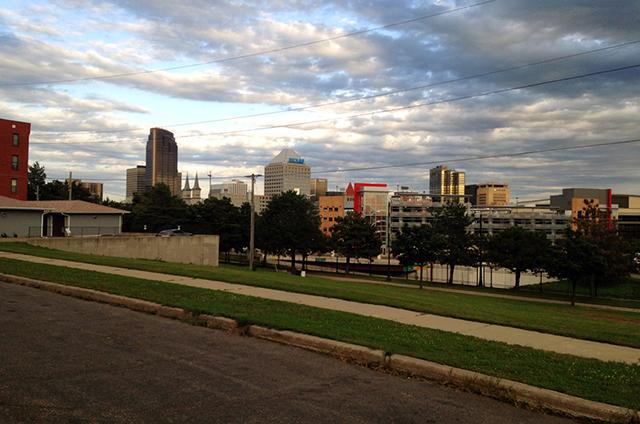 “Downtown is one of the biggest challenges,” Reuben Collins said. “When we created the bike plan, we heard over and over from people that they don’t feel comfortable riding bikes in downtown.”

Eventually the bikeway seeks to reverse that dynamic, connecting downtown to bike lanes and trails up the hills in all directions. And even the first Jackson Street let might provide some relief and prove popular for St. Paul cyclists of all stripes.

“I’m most excited about the idea that Jackson Street, on its own, makes this critical connection between the Sam Morgan and Gateway trails,” Collins said. “For many years, the Gateway trail ended in this area underneath a freeway. After this project, that trail will be continuous all the way to the river.”

St. Paul has long lagged Minneapolis when it comes to bicycling. Topography aside, the downtown dead zone, where bike lanes disappear, has been one big reason why.

Along with the much-needed connection, the even bigger promise of today’s announcement was that the future of downtown St. Paul might tie the city’s fragmented bike network together for the first time. For many of the city’s long-struggling bicyclists, and for downtown street life, it would make a world of difference.