With the Winter Carnival in full frolic, thousands of people will be passing through downtown St. Paul’s “Central Station” the 2-year-old public space at the center of the city. When the Green Line light rail was completed, one design triumph was the erection of the brand new skyway over the platform, recreating a central link in the downtown network. In place of the demolished Bremer Bank building, a shiny new public tower enclosed an elevator and staircase in colored glass. The tower was funded through a federal grant and some wayward transit funding.

The shine quickly faded. In just months, Metro Transit Police began locking the doors at 9 p.m., concerned about security and loitering. After receiving complaints from downtown residents, the tower reopened. But since then, and especially in winter, the skyway has become a site of contention in downtown St. Paul as residents and workers cross paths with a wide cross-section of the city, especially people waiting for the bus. Meanwhile, building owners have a mixed record of maintaining the skyway’s labyrinthine public spaces. At a public meeting last week, the age-old conversation of who belongs in the skyways ignited anew, as downtown residents raised questions about how to maintain the modernist quasi-streets.

Public versus private space in the skyway

There are many pros and cons to skyways. Relief from the wind is often nice, for example, while the division of potential customers into irredeemably separate populations is a stark economic challenge. But the fundamental issue in both downtowns remains the lack of clarity over their status as public space. By combining public and private space in often haphazard ways, the skyways create nearly impossible obstacles for the delicate dance of a modern downtown.

“Security, safety, litter, access, comments about things like employees having to walk through the skyway when there are people sleeping in there,” replied Jon Fure, the director of the downtown Capital River Council neighborhood group, when I asked him what the main issues were that arose during last week’s skyway public meeting. The meeting was well attended, almost a hundred people meeting to air concerns about the downtown skyway environment.

The issues are nothing new. Since its inception in the mid-1960s, the skyway has sat at the crossroads of downtown livability debates. For example, in a Pioneer Press column from 1996, Larry Millett described an outcry over public safety downtown. He wrote then that “the short-term fix” for downtown’s “unsavory reputation … is aggressive policing designed to create a reasonably hassle-free street and skyway environment. If that means adding a few more cops to the downtown beat, so be it.” 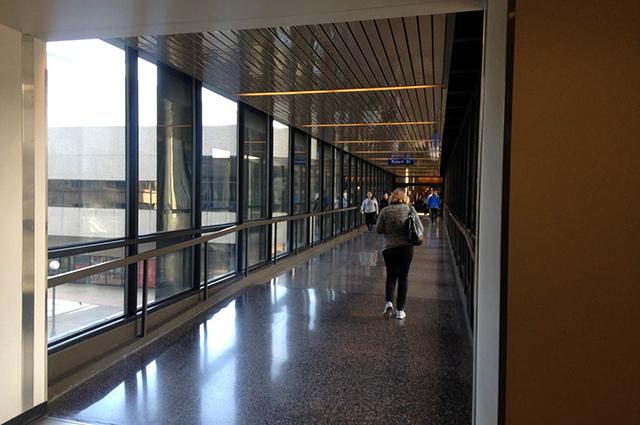 Particularly for people of color who rely on the nexus of transportation and retail in the downtown core, the idea of more policing is cold comfort. In 2014 an African-American man named Chris Lollie was waiting to pick up his kid from school, occupying a chair alongside the designated skyway right-of-way. According to reports, building security guards called in city police, who confronted Lollie. The situation escalated, and eventually a video of the incident, in which Lollie was tased, went viral. He later sued the city, settling for $100,000 in damages.

Since then, the skyways have become more carefully demarcated. Signs appeared in areas outside the 12-foot public right-of-way reasserting areas like the one in First Bank as private space, “for tenants only.” And at a meeting last week, downtown residents packed a community meeting room in the US Bank tower to seek answers for persistent problems like perceptions of safety, cleanliness, and more consistent access from the skyway to the street.

Especially with a cluster of vacant or underutilized buildings in the downtown, like the vacated Pioneer Press building next to the Central Station, the sense of disorder and dilapidation seems to have increased.

“The issue is that there is a perception of, and reality of, a lack of safety and cleanliness in the skyway,” explained Rebecca Noecker, the City Council member who represents downtown. “There’s this feeling that the skyway is going to become a no man’s land with no expectations for how they’ll look and feel.”

Comparing the Twin Cities’ two downtown skyway systems, St. Paul’s has always been more compact. The core network consists of about 40 bridges that link most of the buildings along Kellogg Boulevard with the midcentury office core. Like the skyway system, St. Paul’s downtown is much smaller than Minneapolis’, and overall the skyways are easier to navigate.

Apart from size, the biggest difference between the two networks is that St. Paul’s skyways were partially funded with public dollars. Along with the initial money came policy strings shaping things like strict rules about building hours and access [PDF]. Technically, the skyways are supposed to be open and accessible to the public, including 12-foot rights-of-way through every attached building, from 6 a.m. to 2 a.m. Minneapolis’ system is far less controlled, and individual segments vary widely about when they close and how they link to the street.

Another problem is that in St. Paul, without a well-staffed organization like Minneapolis’ Downtown Council, there is a vacuum of leadership on how best to improve the skyway environment.

“There’s this feeling on the part of a lot of people, business owners and residents, that there’s nobody taking ownership of the issue downtown,” said Noecker. “Its complicated, and the response is complicated. It’s a matter of having someone or somebody responsible for adopting the standards, and holding the various property owners to them.”

Other differences are subtle but important. The St. Paul skyways have a uniform design, an elegant but utilitarian rectangle with modernist leanings. Originally the edges of the skyways’ Vierendeel trusses were edged with gold paint, though in many cases this detail has worn away. (One remnant example is the skyway over Fourth Street linking the Ramsey County Courthouse with the City Hall Annex.) Many of Minneapolis’ skyways, by contrast, are designed by individual architects to match the buildings on either end.

“It’s kind of like a street above ground, but is actually going through private property and is privately run,” Noecker explained. “The only place that is public is the vertical connection itself. That’s maybe why the lack of ownership is more salient, because so many people come into contact with the skyway.”

While the paradox of the skyway will not be easily remedied, according to Noecker, the existing problem has solutions. A lot of the work will fall on the shoulders of building owners, who will be expected to install cameras and have security guards make more regular rounds. For properties like the former Pioneer Press building on Fourth and Cedar, which has been empty for a year, this will be an extra burden.

“How to address real and perceived safety issues, cleanliness, access …” Fure said. “How to do security when its an office building with no business conducted after 6 p.m., but you have to keep it open until 2 a.m.: It sounds good for people to say that they should do it, but we have to take the building owners’ concerns into consideration too.”

Noecker also wants to reboot a committee of building owners, police, and downtown community that is supposed to be more active in managing skyway policies.

“Ultimately the solution is to have downtown be a vibrant place 24 hours a day, seven days a week, with crowds of people at all hours of the day,” Noecker said. “There is safety in numbers.”

With the Winter Carnival bonanza and the Crashed Ice festival in downtown St. Paul this weekend, Noecker’s vision will come true for at least a few days. Enjoy it while it lasts.