Biden earned the nickname “Amtrak Joe” by commuting by train regularly from Wilmington, Del. to Washington during his 40 years in Congress. A highlight of his recent “Build Back Better” campaign was a half-day train ride from Cleveland to Pittsburgh, streamed on Twitch as it stopped in Alliance and Greensburg in Ohio, and Latrobe and Johnstown in Pennsylvania. One pool report quoted Biden as saying: “I love being on the train, [my] favorite means of transportation.”

It’s fun to dream of what a well-funded funded Amtrak system might look like for the Upper Midwest. A recent Amtrak map shared with the Rail Passengers Association showed one possible vision, including a line from Minneapolis to Duluth alongside better service to points east. On the other hand, without cooperation in Congress, particularly in the Senate, even the least ambitious Biden policy is likely to be stymied. After all, rail projects became a political weapon following President Obama’s politically fraught stimulus bill in 2009, prompting backlash in states like Wisconsin and Ohio.

One thing is for sure: Because of the COVID-19 pandemic, Minnesota’s passenger rail is in the worst shape it’s been for 150 years. Since October, only three trains a week have run between Seattle, the Twin Cities and Chicago. It’s a big blow to everyone who relies on and seeks out train travel.

“If you have little kids, they like being on the Amtrak — there’s so much more space to run around, and play card games with your friends or whatever,” said Toya Lopez, an environmental professional who prefers the reduced carbon emissions of train travel. “Traveling on the train with a group is so much better than going in a plane or in a car.”

Minnesota’s golden age of passenger rail saw 150 trains a day leaving Saint Paul for Chicago, Kansas City, Duluth, Sioux Falls, and every town in between. These days, the thin schedule makes rail travel all but futile.

“I take Amtrak to Chicago fairly frequently [and] usually have to take a day off of work so that I spend a week there with my niece and my nephew,” explained Lopez. “There have been times when I’ve had to take care of some business in Chicago, and it’s a hassle not to be able to take something overnight. You arrive back home in the middle of the night, at 10 pm.”

Yet the possibility of rail improvements is on the horizon. Earlier this year, the Federal Railroad Administration delivered a pair of grants to Minnesota, Wisconsin, and Illinois to double daily rail service from Saint Paul to Chicago. The $12 million and $31 million in funding would go to startup costs, additional track, and bridge improvements that are needed for the extra service. 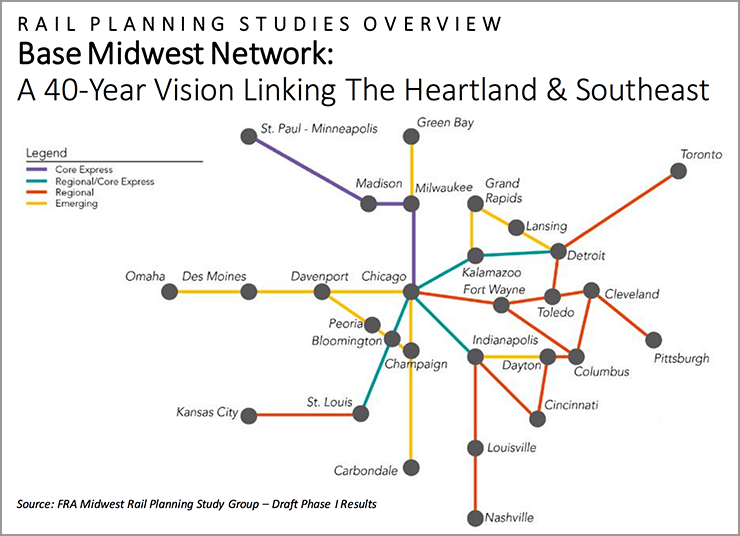 They require a match from states, and so far, only Minnesota has been unable to provide its $10 million share. The state’s looming budget deficit might make that money hard to come by, according to Kevin Roggenbuck, a transportation planner for Ramsey County who has been heading the lobbying effort to get money for the second train.

A second train is important not just to the Twin Cities, Milwaukee and Chicago, but to cities in between, he said. “They might have intercity bus travel, and they might have a little municipal airport, but it’s very expensive to fly out of those cities like Madison or Tomah,”  said Roggenbuck.

The regional benefits are one reason why Roggenbuck and his team have spent months handing out flyers about train funding in places like Saint Paul, Red Wing, and Wabasha, trying to build support for increased service.

“It’s a real mobility option for people,” said Roggenbuck. “They can work on the train. They can relax and enjoy themselves. They don’t have to drive in winter or at night. It’s a great travel alternative.”

A fiscal benefit for Minnesota

Andrew Pearson, a long-time Amtrak rider and environmental advocate, said that if he had to choose, he would prioritize frequency over increased speed. Pearson’s views suggest one reason why doubling Amtrak service would be a game changer for rail system reliability. The new train, like most out of Chicago, would almost always leave on time, adding more flexibility for travelers.

In addition, there might be economic benefits. A recent study by the Rail Passengers Association found that a second train would bring annual benefits of around $25 million to Minnesota, mostly through decreased highway maintenance, the avoidance of road accident costs, and a boost to tourism.

“The added trains are a net gain when you think about costs the state has to bear,” said Abe Zumwalt, the consultant who tallied up the external costs of different transportation modes. “Trains are 18 times safer than driving, [and if] passengers on trains would have had accidents, every one of those costs money to clean up. Driving is so very societally expensive that you see indirect savings. Trains are far cleaner than short-haul flights from Milwaukee or Chicago, which also eat up valuable capacity at the [Minneapolis-Saint Paul] airport. Then there are the efficiency costs.”

Zumwalt’s admittedly conservative estimate suggests that the second train actually would save money for the state. He argues that the discrepancy is symptomatic of a transportation system that often subsidizes the most carbon-intensive choices.

While Gov. Tim Walz’s initial bonding request included the matching sum for the second train, the money disappeared during the final, prolonged bonding bill negotiations. Zumwalt worries that, without swift action in the next year, the lack of investment might jeopardize the federal grants.

Even with the pandemic, there’s some reason to hope for Minnesota’s first passenger rail improvements in generations. Under a Biden administration, a federal fiscal stimulus package could make a huge difference. In June, the U.S. House passed the TRAIN ACT, the largest  investment in years into federal passenger rail. It died in the Senate this summer.

Zumwalt said that if even a fraction of the bill becomes law, it will be a game-changer. The proposal included an increase in funding for Amtrak and creation of a $300 million revolving trust fund to help states develop new corridors. “States won’t have to bear the brunt of getting new service,” he said.

States currently fund a large portion of intercity rail improvements themselves. This puts rail at a disadvantage when compared to, say, air traffic or highway investments, where local money is matched at a very high ratio.

“There is an 80% or 90% match for road funding, while passenger rail is forced to absorb almost all the costs,” Zumwalt said. “That’s the reason we haven’t seen rail proliferate.”

If the feds were to expand support for intercity rail to anything like their funding for highways or airports, the Amtrak system could see widespread expansion. Particularly given the high CO2 emissions caused by short-haul flights, an expanded passenger rail network could dramatically reduce carbon emissions.

Andrew Pearson, who takes the train a few times every year, would like to see Amtrak electrify someday and get new rolling stock. “The transportation network is always so much more than the sum of its parts. Frequency makes it easier for people who want to take the train to fit it into the schedule of their lives,” he said.

Pearson also appreciates the more subtle political effects rail travel could have. Unlike air travel, in which flights link big cities and relegate the rest of the country to “flyover” status, passenger rail almost always stops at the smaller places in between. Minnesota cities that can seem disconnected from the metro economy — Rochester, St. Cloud, Red Wing, Fargo-Moorhead, Hinkley, and more — could see increased travel to and from the region’s biggest cities. Done at scale across the Midwest, passenger rail could theoretically knit together the fractured political landscape.

Zumwalt cautions that it’s not something that can be done on the cheap. “If you fund it halfway, investing an inefficient amount, it’s not enough to take off and provide value,” he said. “If you invest a healthier sum, something routine and regular like every other actual mode of transportation, the return on investment improves.”

At the beginning of a Biden administration, it’s worth dreaming of what “Amtrak Joe” could do to improve America’s long-neglected passenger rail system. There’s nowhere to go but up.