A month ago in this column, I described how the sale of a manufactured home community in Blaine to a Utah-based investment firm might be an ill omen. The main takeaway was that the Twin Cities’ most affordable housing is increasingly becoming a financial commodity, controlled by national investors. I wrote that “if left unchecked, institutionalized housing threatens to become a modern-day feudalism.”

Since then, a new 48-page report has foregrounded the problem posed by investor-owned single-family rental properties in Minneapolis and St. Paul. Despite the overall wealth of the metro area, there’s no starker sign of its metropolitan segregation of opportunity than the wide gulf between Black and white homeownership rates, the largest in the nation.

“Who Owns the Twin Cities?” was released this month by the Urban Institute policy nonprofit. It analyzed the impacts of the COVID-19 pandemic on the Twin Cities’ longstanding racial gap in home ownership rates. The authors, Yonah Freemark, Eleanor Noble and Yipeng Su, were interested in how the events of 2020 affected that key inequality.

“Looking at the census, the overall trend with the homeownership gap is really negative, going from 30% to 20% for Black home ownership even as the white rate stayed steady,” said Freemark, a senior research associate. “One surprising fact: We did see a large decrease in black home ownership in highly white communities areas outside of the core cities of Minneapolis-St. Paul.”

No other U.S. metro area features such stark inequality around who owns property, with a large gulf between Black and white people. Because owning a home is central to economic and political power, that gap is a key part of regional landscape of structural racism, and explains that lack of the stability and wealth for the majority of Black residents.

According to the study, the last few years before and since the COVID pandemic have seen this problem worsening. Looking at the last five years of data, one key trend is a marked decrease in Black home ownership rates in both majority-white suburban areas and core city neighborhoods experiencing displacement.

The authors use a four-part classification created by the University of Minnesota’s Institute for Metropolitan Opportunity that simplifies analyses of gentrification. Tellingly, the Urban Institute researchers updated an earlier study to include the last few years, finding an increase of concentration of poverty and disinvestment coexisting alongside displacement in other parts of the Twin Cities. 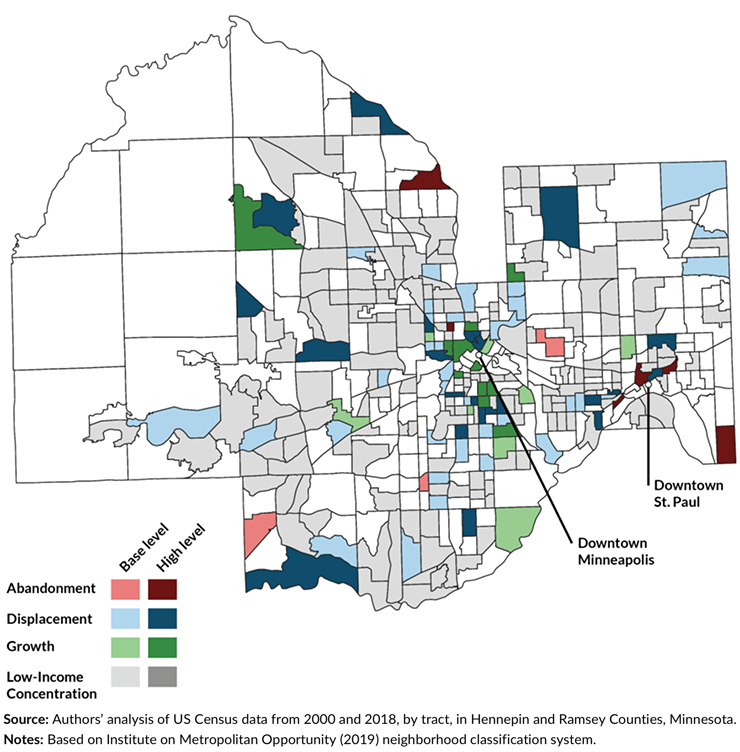 For example, in neighborhoods experiencing displacement, the rate of Black homeownership has declined thanks to what Freemark describes as the Great Recession and its aftermath.

“Those neighborhoods [experiencing displacement] are not only where Black renters are finding it more difficult to afford because rents are going up, but Black homeowners are finding reasons to leave,” Freemark told me.

The report also amplifies the national narrative around how COVID-19 shaped housing. As the pandemic hit, there was a rapid transformation of employment and commuting patterns. That change, along with the slow recovery, exacerbated already existing inequality. Essentially, as a recent Harvard study described, in many U.S. cities there are “two housing markets,” one for the work-from-home wealthy and another for vulnerable service workers, disproportionately people of color.

The bulk of the Urban Institute study focuses on the increasing financialization and large-scale conversion of single-family homes into rental property. The trend is another long-term effect of the 2008 foreclosure crisis, which lingered for years in disinvested urban neighborhoods. The foreclosures allowed institutional investors to quickly amass property, an accelerating trend thanks to low interest rates and a flush of investment capital.

A recent working paper [PDF] by University of Minnesota researchers, led by Geography Professor Kate Derickson, makes a similar argument. The authors point out that private equity firms have begun to play outsized roles in the markets for certain neighborhoods, particularly north Minneapolis. One consequence of this institutional ownership is a sharp increase in evictions and fees paid by vulnerable renters.

In north Minneapolis, the inequality produced by decades of discriminatory lending made homeowners vulnerable to foreclosures. In part due to these high foreclosure rates, the neighborhood’s property values lagged far behind the rest of the city.

Since then, many properties have seen sharp increases in value. But instead of going to working-class homeowners, the resulting appreciation of real estate value has gone to financial institutions, especially in neighborhoods like north Minneapolis or southeast Como, where around 10% of all single-family properties are owned by institutional investors.

“The total value of all these rentals increased from $300 million in 2005 to $1.5 billion in 2020; that is huge appreciation,” explained Eleanor Noble. “It has a lot to do with targeting these properties in these specific areas.”

Freemark argues that there are overlapping reasons for the rise in institutionally owned rentals, including their foreclosure status, the ability of investors to pay in cash, a gap around access to knowledge about upcoming sales, and an “economy of scale” in specific places like north Minneapolis’ Folwell neighborhood.

Another corollary of the investor rental trend is that nearly all of the regional growth in single-family home construction was offset by an increase in rental conversions. In other words, the overall total of single-family homes in the Twin Cities has essentially remained flat.

In general, the Urban Institute study is a red flag for housing policymakers in a metro area already facing stark inequality, and it describes a trend that’s particularly difficult to study. Researchers like Noble point to a key problem with studying the single-family rental landscape: the complexity of financialization. The lack of easily accessed data around property ownership and rental licensing makes it exceedingly time-consuming to keep track of who owns what homes, especially given the rapid pace of mergers and sales of homes-as-assets.

“There are so many shell entities and LLCs [limited liability corporations] and various owner names,” explained Noble. “It makes it really hard to understand exactly what these portfolios and owners look like.”

Another of the authors’ big concerns, and a point for future research, is how the post-pandemic economy could accelerate inequality, particularly as the eviction moratorium disappears for Twin Cities renters. In response, the study authors suggest that cities and regional governments might adopt stronger anti-displacement policies, such as adopting fair housing rules for real estate appraisals, capping the number of properties for investment trusts, and changing property auctions to prioritize nonprofits.

Without some policy change, it seems clear that the nation’s largest gap in homeownership is not going to disappear anytime soon.

“Local and state governments can be thinking about what they can do to help residents who do want to own their own home, to help people being pushed onto the rental market,” said Freemark. “Both homeowners and renters are vulnerable to change and need to be protected, especially if they are members of historical discriminated classes.”