Riding the bus every day means embracing some degree of randomness. Like all transportation, buses are vulnerable to chance events. But instead of traffic jams or road construction, the variables I’m thinking about are little things: cash payments, the distance between bus stops, people carrying bulky luggage, exiting from the rear versus the front door, or stops located on the near versus the far side of an intersection that keep the bus from making the stoplight. All these things add up to the difference between being on time or being 10 minutes late.

That’s why, quietly over the last few years, Metro Transit has tinkered with these small details on key urban routes. It’s called the “Better Bus” program,” and it’s the kind of small, marginal improvements to bus services, speed, routing, and reliability that most people might not notice. But under the surface, it all adds up to a big improvement.

“Lets say your bus is out there: There are 20 different variables that can affect your trip,” explained Michael Mechtenberg, a program manager at Metro Transit. “How often you stop, how many people get on, how they pay, are you going to make the red light or are you going to hit it. We started thinking about this back in 2018, [and] the idea was to speed the bus up.”

After riding the bus for years, I found the idea of going a bit faster appealing. I used to take Route No. 3 every day from St. Paul to the University of Minnesota campus, and my biggest pet peeve was stop spacing, or what I viewed as unnecessary stops along the route. For example, there were two bus stops on the same block on Como Avenue, just west of 29th Avenue, that were less than 300 feet apart. Each time the driver stopped at both of them to pick people up, a small part of me silently screamed: “Why not just have one stop halfway in between?!”

This is kind of thing you obsess about when you learn the basics of transit planning. And it turns out it’s also exactly what Metro Transit planners like Mechtenberg have been thinking about too.

“We brainstormed all the 15 things that can affect speed and reliability of the trip,” he explained. “One of those small things is stop consolidation. What you’re saying is, on a trip going a mile distance, if you have eight stops, it’s possible that the driver could have to stop at all eight locations. By only giving the driver four stops to stop at, we’re able to schedule those stops better.”

So far, the Better Bus team has taken three core city routes and eliminated dozens of stops from each, boosting reliability and speed instead. They’ve consolidated 19 stops from the No. 2 route, 55 stops from the No. 63, and 70 stops from the No. 3 route. And it turns out that stop consolidation is just the tip of the transit-planning iceberg, little things that add up to why many core urban bus routes are more efficient and reliable.

The No. 2 Route: the city’s slowest bus

The agency’s Better Bus program fittingly started with the No. 2, a central Minneapolis route that runs along Franklin Avenue and through the University of Minnesota campus over to northeast Minneapolis. If you ever rode on the No. 2, you already know why it was an ideal choice. In my experience, it was the slowest bus I’d ever boarded. The frequency of the stops — every corner of Minneapolis’ “short blocks,” which are one-sixteenth of a mile apart — made traveling the kind of experience that required zen patience to enjoy. It was almost (but not quite) faster to walk, and I never got on that bus if I was in any kind of hurry.

Individually, consolidating stops only saves a few seconds. But if you add up enough of those over the length of trip, you get a significant boost in speed. That’s why, these days, after Metro Transit removed 19 stops along the route, the No. 2 speeds along just a bit faster.

“You assume 20 seconds of time savings per stop, multiplied by the percentage of the time the bus stops there,” explained Mechtenberg. “Taking out a few seconds adds up. For example, if we eliminate a stop where currently a bus is stopping one-third of the time, that’s about seven seconds out [of the trip]. It’s not very much, but if you eliminate around 80 stops [as they are doing on the No. 3 route], collectively that adds up to a few minutes.”

A few minutes might not seem like a lot to most people, but to a bus planner that’s a huge improvement that has ripple effects around staffing, equipment needs, and more.

Would you rather have choice or predictability?

When you dive into the details, bus planning is like a giant game of “Would you rather?”: Would you rather walk two extra blocks, or have the bus take five more minutes to reach your destination? Would you rather have more choices about where your bus goes or always know exactly where the bus begins and ends?

Transit planners wrestle with those questions.

“The program has sort of evolved over last few years,” said Mechtenberg. “It’s certainly about improving speed, but it’s also about reliability. [We want] buses showing up when you say it’s going to and more trips on time.”

Take “bus complexity,” or the number of possible “branches” or various routes that run along a line, another big variable that Metro Transit has been trying to simplify. Some of the lines can be wildly complicated. For example, the No. 64 serving St. Paul’s East Side has D, H, and N routes that all go slightly different places. That can make it hard for riders who don’t have every detail memorized.

“It’s called route and schedule simplification,” said Mechtenberg, describing another tactic his team used. “The No. 3 [route] is the poster child for having a lot of different branches. With the combination of those different patterns, the No. 3 had over 20 different patterns the bus could take.”

That’s certainly true. When I rode the No. 3 route, it was almost a bit of a mystery where I’d end up. The No. 3E versus the No. 3U would take you different distances along Como. And when you accidentally boarded one of the lesser-known branches, for example, the recently eliminated (and very rare) No. 3K bus, you’d snake along a little-used road through a light industrial park instead of heading straight down Como Avenue. If you’re trying to get somewhere reliably, those kinds of routes can be frustrating.

Thanks to the Better Bus program’s changes to the No. 3 route, many of the odd “branches” have been eliminated. Plus there’s a tweak to the route that sends it right down Washington Avenue through downtown Minneapolis.

So far, the results of the Better Bus program have proven popular. According to surveys done by Metro Transit, most riders value reliability and speed over other kinds of bus planning priorities. 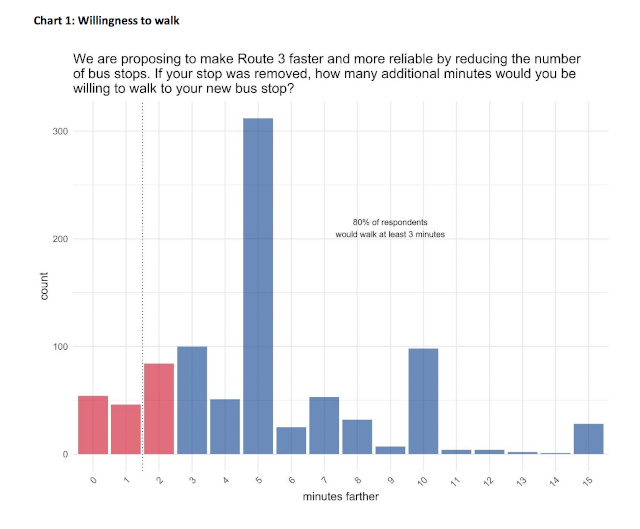 So often with transportation, political energy is spent chasing headlines and gimmicks, such as 1980s “people movers” or the (extremely horrible) Hyperloop projects that are gleams in the eyes of mayors from Las Vegas to Fort Lauderdale. Meanwhile, there’s a lot to be gained by simply paying attention to the basic tradeoffs of everyday bus service.

Especially in a post-COVID environment, focusing on high-ridership urban routes is increasingly important. Commuter transit continues to have extremely low ridership, both locally and around the country. After improving the No. 2 through south and northeast Minneapolis, the No. 63 bus on Grand Avenue, and the No. 3 bus between the downtowns along Como Avenue, Metro Transit is deciding which core routes will be included in the program next. Hopefully, nobody notices the changes much, but everyone gets where they’re going just a little bit faster.