Kids today will likely never understand what a life-saver a great bike map can be. Maps are critical because, compared to navigating by car, bicycling offers special challenges. You never want to find yourself routed onto a busy highway with no shoulder, or — as I have done —  following bike route signage directly onto an I-94 on-ramp.

Bike routes are tricky like that, which is why old-school bike maps, designed by bicycling cartographers, were so important. And the best local map I ever used was the Twin Cities Bike Map, a heavy-duty masterpiece that remained wedged in my bike pannier for years. I bought my first copy back in 2007 and after I wore through that one, I acquired an updated version that again boasted holes before too long.

That map is the brainchild of Doug Shidell, who worked as an IT professional at Bloomington-based Quality Bicycle Products for years. He made the maps on the side, part of a self-described “paid hobby.”

“I’ve researched every road on that map,” said Shidell, the brains and legs behind Bikeverywhere, his map company. “My whole goal on this has been to make it very easy for bicyclists to get from A to B, with a network of easy routes to follow: as straight as possible, with not a lot of twisting.”

Now, at 71 years old, Shidell is shutting his mapmaking down. During 2020, he decided to put the Bikeverywhere business up for sale, including the software, brand and decades of intellectual property.

The value of a good map

I first realized the true utility of Shidell’s map on a solo trip to Western Wisconsin. I was trying to find the least-horrible way through Woodbury, en route to the Highway 10 bridge to Prescott. (Pro tip: once you get into Western Wisconsin, the back roads make for glorious, low-stress bicycling; it’s getting safely through the suburbs that’s always the challenge.)

I clutched that map like a baby grips a pacifier, and Shidell’s routes performed beautifully, taking me along the wide shoulders of Military Road and down off-the-beaten-paths like Lamar and Lehigh Avenues in Cottage Grove. The only catch — neatly marked with dotted lines denoting “danger” — was the half mile connection down busy 110th Street. The rest was scenic, relaxing gravy.

It dawned on me that the map I held was a secret Twin Cities’ decoder ring, revealing safe passage and adventure in all directions. I relied on it for years, but it wasn’t until just recently, chatting with Shidell, that I really understood how much work it represented.

“I decided I really needed to research every route, every three years,” explains Shidell, a decision he made after one user encountered unmarked trouble in White Bear Lake. “That’s a third of the metro area that I had to check every year, to make sure it was as current as possible. I ended up getting mapping software and coding [the map] so I could tell what year I had last researched it. That began this constant process of updating.”

Keeping up to date with all the construction projects and other public works impediments that mar safe bike routes on hundreds of miles of metro roads is a nearly impossible task, and normally, no normal person would attempt it. But Shidell did just that for decades, often with the assistance of friends, spending weekends on scouting rides across the region on his Surly Long Haul Trucker or Salsa Primera.

Today, Shidell lives in South Minneapolis, but he began his bike routing hobby back in 1972 when he was a resident of Madison, Wisconsin. There, he co-wrote a trail guidebook featuring rural routes through Dane County. Moving to Minneapolis a few years later, he realized there was a huge gap in the bike map scene.

“I moved to the Twin Cities and found that there really wasn’t a good set of maps,” Shidell told me. “The [Minnesota] DOT published a map, [but] they were using a strange criteria for picking roads. The routes weren’t good. The criteria they used was real odd: that if there were no bike accidents on the road, that it was a good bike road.”

(That faulty agency logic reminds me of the famous data paradox about airplanes being shot down in World War II. There are no bike crashes on roads if there are no bicyclists riding the roads in the first place.)

Enter the Metro Area Roads & Bike Trails, Shidell’s first Minnesota map that dates to 1984. Today, Shidell admits that it’s pretty hokey, and has some mediocre information. But improving it was only a matter of time, and within a few years, Shidell was producing cartographic excellence.

Given that Shidell spent decades riding every metro area bike route from Monticello to Farmington, I was curious which parts of the city were his favorite.

“The southeast metro is really great, [especially] the Afton area,” said Shidell. “That’s just unbelievable, with a lot of nice hills, twisting and tree-shaded roads. I love that. I’ve also got a favorite route that goes out in the Excelsior area, and comes back on the Lake Street extension. It’s got a lot of really cool hills on it and shade roads. I also love riding around Minneapolis and St. Paul, where something about the urban layout feels kind of cool.”

(I also asked Doug which parts of the metro he hated visiting on scouting missions. Like any benevolent cartographer, he was reluctant to name names, but second-ring suburbs, you know who you are.)

Of course, bike routing is different in 2021. Smartphone apps have improved dramatically at a pace matched by the comprehensiveness of cellular service. I’ve been lost many times bicycling around rural areas with nothing but my phone, and most of the time, it does a solid job.

That’s one reason why Shidell is taking the map out of publication after nearly forty years.

“It’s a mixed thing,” said Shidell, describing online mapping applications, noting that the algorithms used to select routes can sometimes miss details that would be important to someone on the ground. 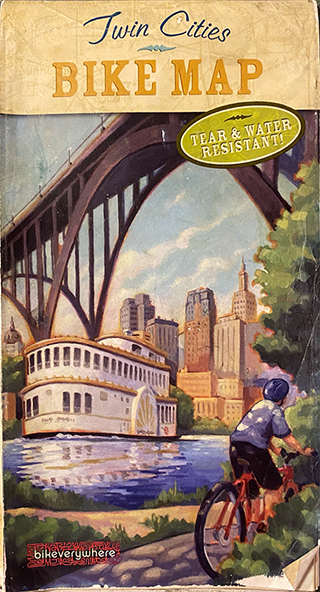 As Shidell winds down his mapmaking, the last paper maps, the 2018 edition, have been printed. Though there might be a few lingering around area bike shops, Shidell isn’t producing any more of them. He went digital a few years ago through an app called Avenza — you download the app and get access to his map.

“My hope is that somebody who is enthusiastic will pick it up and take it from where I started it,” Shidell told me. “Someone with the right attitude and approach with the right savvy with social media can turn it into a successful business.”

Maybe I’m a bicycle crank, but algorithms are no replacement for the human touch. Nothing beats a map made by a person who has ridden there and thought deeply about whether it’s better to take Townline Road or Duck Lake Trail on your way through Minnetonka.

In the meantime, Doug is going to enjoy retirement the best that possible: biking all over metro area, on streets he knows better than just about anyone else.

The Twin Cities’ most important bicycle mapmaker is retiring