Nobody plans on opening a big transit project during a pandemic, but that’s what happened back in December, when Metro Transit unveiled the new Orange Line bus rapid transit (BRT) that runs 20 miles between downtown Minneapolis and Burnsville. Because it travels on the freeway, the Orange Line offers swift service compared to just about any other local transit route, taking you from end to end in only 35 minutes, even during rush hour. For Twin Cities transit, that’s fast!

The only catch? It’s a freeway-running line, and so almost all the stops are right next to the massive concrete walls of I-35W, making many of the station areas quite unappealing. But with that tension in mind, I took the Orange Line this week, hoping to find out how the new project looks and feels, and what its potential might be attracting future riders. 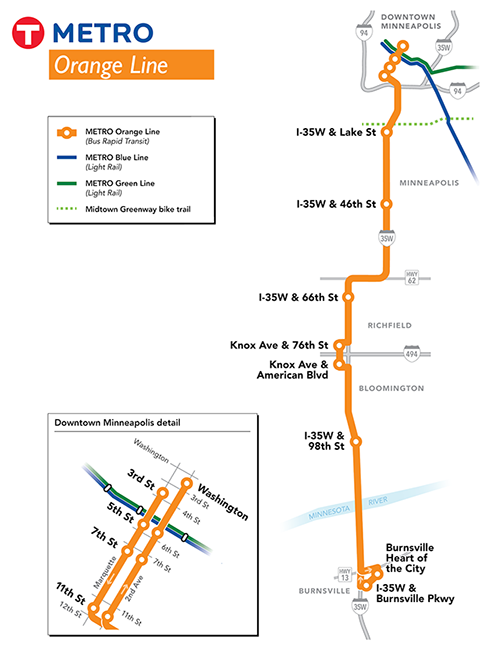 It turns out that, thanks to a few transit planning details, the Orange Line project is as good as transit running down a freeway can be.

End of the Line: Heart of the City

Without grade separation (i.e. tunnels), there’s a fundamental transit planning tension between density and speed. The parts of the city with the largest numbers of people are almost always the slowest parts of the route, and vice versa. This is why putting BRT straight down Interstate 35W was always going to be a mixed-bag, as nobody wants to live or walk next to a busy freeway. Negotiating crosswalks across dangerous off-ramps quickly erodes even the most sanguine attitude.

This is why it’s refreshing that the Orange Line planners did their best to put the stations as close as possible to dense places. The best decision was ending the line in the midst of the apartment buildings of Burnsville’s Heart of the City neighborhood, rather than, as was once suggested, plunking the stop amidst the parking ramps of the Burnsville Transit Center across busy Highway 13.

Burnsville’s Heart of the City has long been the most ambitious of the planned “downtowns” through the various Twin Cities suburbs. Built around an actual public square and landmark civic building, the dozen-or-so blocks of mixed-use apartment buildings offer bona fide walkable density, something that few suburban communities can provide. With the addition of high-frequency, comfortable bus service, it’s theoretically possible to imagine living here without a car.

That last detail is the key to building transit ridership. While many of our regional suburban transit projects in the Twin Cities rely on park-and-rides to attract numbers, that’s always been a paradoxical concept to me. In most places, quality transit depends instead on serving people who don’t have to drive in the first place. That’s why it’s exciting to think about how, as Burnsville’s fledgling downtown expands, ridership on the new transit service should grow.

Another suburban transit rule of thumb: if your station is surrounded by parking lots and wide roads, rather than buildings, it’s probably going to be a dud. So it’s refreshing that the only detour that the Orange Line takes is along Knox Avenue, on either side of the job-rich 494 corridor. Instead of staying on the highway, the bus jogs a few blocks west and makes two stops, connected by a brand-new tunnel under Interstate 494. Both stops bring potential riders closer to key destinations.

The first is an obvious win for Orange Line ridership. The Knox and 76th stop stands next to the Best Buy corporate headquarters, which employs around 5,000 people (at least theoretically, in pre-pandemic times). If and when these office jobs return, the lanyard crowd will have a slick new option for skipping slogs down 35W.

At first glance, the other stop in Bloomington, at Knox and American Boulevard, is strange: a pair of BRT platforms surrounded by mostly-abandoned car dealerships, where the closest walkable destination is the Lucky 13 Pub. But the site is certainly ripe for redevelopment, and it’s easy to imagine mixed-use apartment projects popping up in the acres of asphalt surrounding the new station. If that happens, the Knox Avenue detour could provide two well-used stops along the Orange Line, boosting ridership and bringing walkable, reliable transit into the heart of the 494 corridor.

Finally, the 2021 Award for Most Improved Freeway Underpass goes to the Lake Street Orange Line station. Until recently, this was one of the least pleasant sidewalks in all of Hennepin County. Today, after a $20 million investment, it’s a revelation. I would venture to say that the underside of the interstate is as walkable and welcoming as a massive concrete underpass can possibly be.

The transit station will surely boast the most riders along the Orange Line route, and represents the linchpin of the project. It’s also a long overdue public space improvement for a neglected part of Minneapolis. Running interstate freeways through the hearts of walkable cities was never a good idea, but investments like this are one way to redress historical blight caused by 1960s interstate planners.

Today, the improved sidewalks and station environment connect the diverse Lake Street communities, long been divided by the massive interstate. At the corner of Lake and 2nd Avenue, the cornice of the former Roundup Beer Hall building still boasts its Ilhan Omar campaign sign: “Send her back… to Congress!” It makes for a stark contrast to the home-made Trump sign erected on a snowy freeway margin back in Burnsville.

The end result is quite a departure from the once-planned “35W Access Project,” a proposed MnDOT highway expansion that would have seen adjacent homes bulldozed and replaced by additional on-ramps. Today’s transit investment reflects a shift in vision, something South Minneapolis residents should be thankful for.

A new standard for suburban transit

Thanks to their land use fundamentals, the bar for suburban transit projects is quite low. But with design details that combine speed and walkable density, the Orange Line sets a new standard for similar local projects. It has enough transit-oriented development potential to easily triple the ridership of other metro BRTs like the Cedar Avenue Red Line or the planned Gold Line. With its reasonable price tag — $150 million — and much needed improvements to long-neglected spots like Lake Street, the project has already improved people’s lives.

That said, my biggest Orange Line gripe is its commitment to the new park-and-ride surface lot at 98th Street. Transit planners force the southbound buses to take a five-minute detour away from the freeway to circle the lot, presumably to make it more convenient for the hypothetical downtown commuters, so they don’t have to walk a few blocks across the interstate bridge. It’s a waste of people’s time.

Metro Transit’s ridership projections, carefully scrutinized during the funding process, predict 10,000 daily riders by 2040. If not for the COVID pandemic, which has upended transportation patterns, I’d say that this project should easily meet that goal. Of course, how COVID plays out remains a big question mark. But for a service running down a freeway median into Dakota County, this line looks great. When the pandemic permits, it’ll be a key amenity and transportation choice for thousands of folks throughout the south Metro.