The thing I most appreciate about Chad Montrie’s book, Whiteness in Plain View, out last year from the Minnesota Historical Society Press, is its broad scope. Too often when discussing Minnesotan racism, we focus only on the core cities of Minneapolis and St. Paul, which have long been home to the majority of the state’s people of color.

That’s a fine and necessary step, but Montrie’s book casts a welcome wider net. He includes chapters detailing racism in Austin, Duluth, and the Twin Cities suburbs of Bloomington and Edina, expanding the scope of the conversation to include places where people of color rarely live, in addition to where they do. Montrie calls out these places around the state, including most of the suburban metro, as cities predicated on racial exclusion.

To me, Montrie’s chapter on Edina was the most eye-opening. The chapter opens with a photo of a minstrel competition that took place at the Edina High School in the 1950s, apparently a regular event since the 1930s. The image of a stage full of children dressed in blackface is shocking, and it forms the preface for Montrie’s story of how, as it grew, the city of Edina transformed from a diverse, multi-racial place into an all-white, wealthy suburb.

Most of Montrie’s story details the estrangement and gradual departure of long-established Black families from Edina; people who had owned farmland in what was then a small, rural community. That diversity changed pretty quickly as Edina grew, and as golf courses and culs-de-sac appeared,  Edina became synonymous with exclusivity.

“We can make an argument for saying that the government has to do something to undo racial exclusion,” Montrie said during his book launch earlier this year at the Edina Historical Society. “(Without that), we run a risk of overlooking the extent to which policy and law reflected and sustained and reinforced popular white will. And the ways in which racial exclusion sometimes was done in an extralegal way.”

By now we should be familiar with the list of usual suspects, tools of urban segregation: racial covenants, urban renewals, freeway construction, discrimination and Montrie’s “extralegal” group violence. For example, Montrie tells the story of the Taylors, an African-American family that built a home in Edina’s Morningside neighborhood around 1960. After overcoming a great deal of institutional and personal racism, they eventually moved into Morningside, and enrolled their kids in Edina schools.

But the Taylors were the exception that proved the rule, and remained the only Black family in their community for over 15 years. According to Montrie’s work, it was par for the course for most U.S. suburbs. 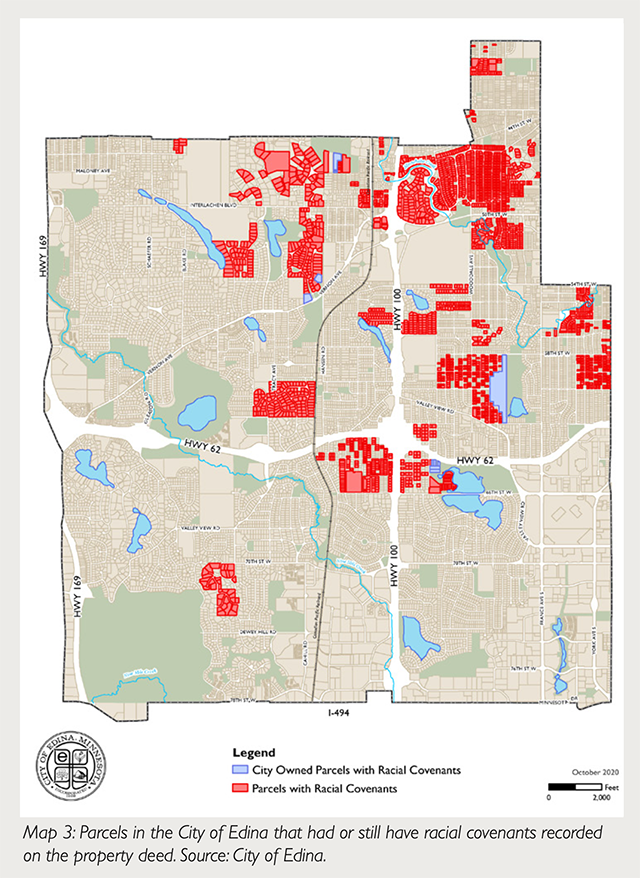 “The ghosts of racial exclusion are all around us,” Montrie said. “This doesn’t just happen in Edina or in Morningside or in Minnesota. This book is just one sort of puzzle piece in something larger that we need to do for national reckoning.”

Things might be starting to change, even in Edina. For years, there’s been a push to create more opportunity and diversity in the affluent suburb. In part inspired by Montrie’s work and the work of groups — especially the Mapping Prejudice project — which have been shining a light on the history of racial exclusion in the Twin Cities’ affluent ‘burbs, grassroots groups and city leaders have been trying to push Edina to embrace affordable housing

“We had very stiff opposition,” said Hope Melton, a retired urban planner who co-founded the group Edina Neighbors for Affordable Housing in 2017. “It was the same folks who really controlled the city’s agenda for many years. But Edina was changing and it was a very propitious time to start.”

Melton met her first cohort of housing advocates during the 2016 Bernie Sanders campaign, after which they began looking for ways to push for equity at the local level. Since then, it’s been an uphill battle to get affordable housing into the agenda of a city which has long been predicated on its opposite.

But at least people are aware of the problem these days, and there’s a growing movement in Edina, both at the grassroots and in City Hall, to try and fix its longstanding lack of housing opportunity.

“One of the first things we did was a lot of work educating the city about the need for affordable housing,” Melton said. “We try to help people understand why there’s a need, and who needs it, and why it’s difficult to create. We’re trying to dispel the old stereotypical notion of what affordable housing is.”

With the help of advocates like Melton and her colleagues, Edina completed a study two years ago that outlines the need and barriers to building affordable housing in the city of 50,000 people. The report details the lack of affordable housing in the city, a place where almost 90% of residential land is restricted to single-family housing. The list of hurdles includes the lack of public financing, regulatory hurdles and an overly restrictive zoning code.

“It’s very tough,” Melton said. “Financing is tough, and a big part of that is the single-family zoning which keeps the land scarce and expensive. We tried to build a couple of modest homes in area that had been a city park, and we lost that one. Neighborhood opposition was pretty stiff. But on the whole, the city’s made tremendous progress.” 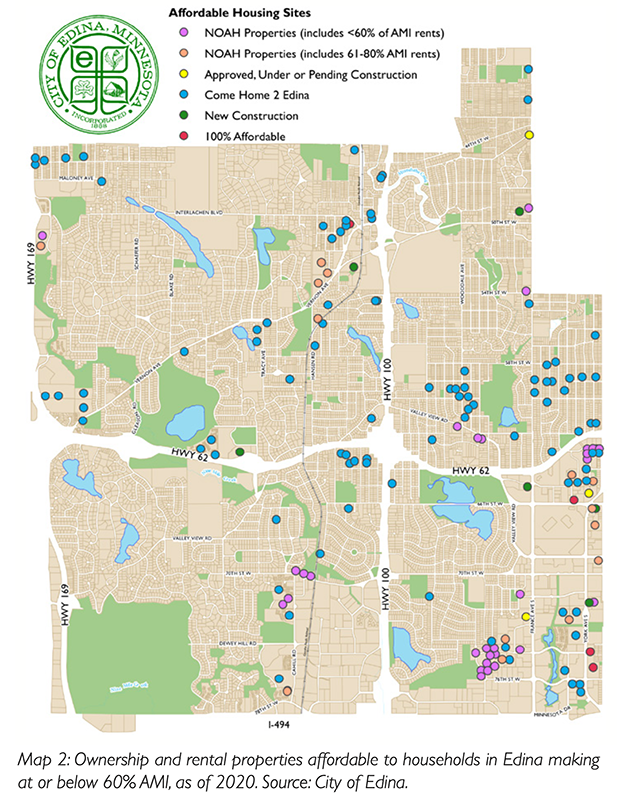 For example, Edina adopted an inclusionary zoning policy in 2020, which will make it easier to incentivize or fund affordable housing for construction projects going forward. As Melton points out, the city has added around 300 new units of income-restricted affordable housing in the past few years.

That number is far short of the need. The Metropolitan Council suggests Edina should build 1,800 new income-controlled homes by 2030, leaving the city far short of that goal. The city has been running an education campaign aimed at building support for needed changes and funding. 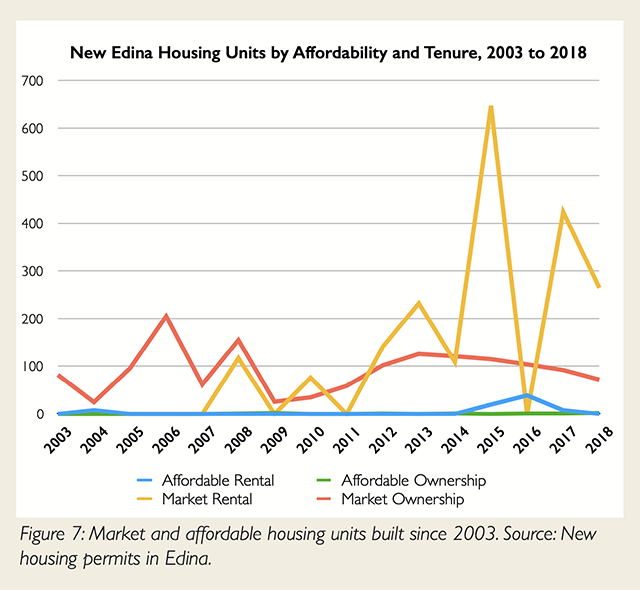 Still, given the historical context described in Montrie’s book, even small progress marks a large change from previous generations. Perhaps that’s why folks from the Edina Neighbors for Affordable Housing seem so optimistic.

“Edina’s changed and changing for the better,” Melton assured me. “Back in 2015, we did a month’s long visioning process. We very clearly wanted to be an open and welcoming community. We have a ways to go, but the city has changed a lot.”

Edina grapples with legacy of whiteness